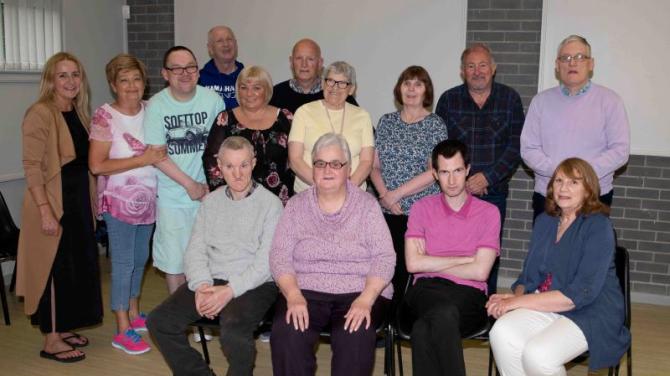 A FORMER Antrim teacher is appealing for helpers and funding for a long-running club assisting people with learning difficulties.

Gary Trew, who taught at Ardnaveigh High, later Massereene College, for almost 30 years, is well known for his cross-community work.

He was instrumental in building a Peace Path between the school and St Malachy’s, which came to the attention of the White House and led to a meeting with then-president Bill Clinton.

The popular teacher is also a volunteer with Antrim Gateway Club and last week Ruby’s Bar hosted a special fundraising quiz and raffle in aid of the group.

Mr Trew said that with the current crop of volunteers now getting on in years, it’s time for some new faces to step up to the plate - and he is particularly keen to hear from former pupils.

“I have been honoured and privileged to serve as leader of Antrim Gateway Club for nearly 36 years.” he said.

“Under the auspices of Mencap, we provide a social, leisure, musical and indeed educational environment for our members, all of whom have learning difficulties.

“Over the years we have literally offered thousands of our members a range of fun activities, which also provides a welcome respite for families and carers, for a few hours, of an evening.

“Like the rest of society, the lockdowns over the past few years have proved challenging for Antrim Gateway Club and sadly some of our members have not returned, due to mental health concerns, on top of their learning difficulties.

“Having used the excellent facilities provided free of charge by Antrim Day Centre for well over 30 years, since we were permitted to recommence in March of this year, we have been unable to use the Day Centre and unfortunately this is unlikely to change any time soon for user groups like ourselves.

“Thankfully, for the past four months, we have been able to hire premises at Stiles Community Centre in Antrim, for which we are most grateful, but numbers are restricted and we have to rotate members’ attendance, much to everyone’s frustration.

“Perhaps with the Covid lockdowns which lasted nearly 18 months, our helpers have returned with renewed zest and enthusiasm, and the atmosphere has been buzzing.

“However, because of health issues and family concerns, we have lost valued helpers and on a personal level, I am concerned about the long term future of our club, as all our helpers are in their late sixties and early seventies and some have health issues.

“It is to their credit, that the commitment of Linda McLearnon, Geraldine Russell, Dorothy Leonard and Moya Coulter, who have amassed more than 100 years service collectively for the club, has been outstanding, especially when one considers that all are voluntary, unpaid helpers and everyone has been out of pocket while supporting the club.

“Long gone are the days when, as a teacher in Antrim for nearly 30 years, I was able to bring senior students from my old school, Ardnaveigh High School, later Massereene College, to add youthful vigour and creative talent as Gateway helpers.

“I am especially proud that with our extensive cross community work with the old St Malachy’s High School, we were able to attract a number of their pupils to give their support, thereby breaking down all types of barriers.

“The cross community ethos of our club continues to this day, both with helpers and members, but sadly since retiring as a teacher, the club has lost the ability to attract younger helpers, hence my concerns for the future.”

Mr Trew said that he hopes that the group can continue with renewed vigour later this year.

“More than 20 years ago I invited my good friend Robert Swann to sing at the club as a one-off,” he said.

“Thankfully Robert still comes on a regular basis and the musical evenings he stages are unquestionably the most popular activities, as the members love music and dancing.

“I am pleased to say my ‘spaghetti quizzes’ still go down well, as do party games like musical chairs.

“Because of the restricted nature of the current premises, we have been unable to offer activities which require more space.

“Hopefully, from September, we will be able to provide a more extensive programme, with our customary cinema and theatre visits restarting, alongside popular evenings at local restaurants.

“Thursday June 16 was our last evening until September, followed by a much-needed fundraising charity event, in the form of a quiz at Ruby’s, formerly The Cova, in Antrim.

“We need to replenish our diminishing coffers, as we have to pay Mencap affiliation fees, insurance, hire of premises and payment to a local DJ in recent weeks, with virtually no money coming in.

“I would be delighted to hear from anyone interested in helping our club, an ex-pupil, especially those who have helped in the past, or indeed anyone who has a family member who would benefit from becoming a member.

“Also anyone who would like to make a donation towards the club, it would be gratefully received.”

He added: “We are more than grateful for Robin and Ruby’s agreeing to host the fundraiser after our last Gateway meeting of the term.

“I am also really heartened that so many of my former pupils who helped out at the Gateway Club back in the day were inspired to pursue in careers where they now care for and look after people with learning disabilities and I love to catch up with them.

“Who knows, volunteering with the Gateway Club could also inspire the next generation to go on and do the same.”