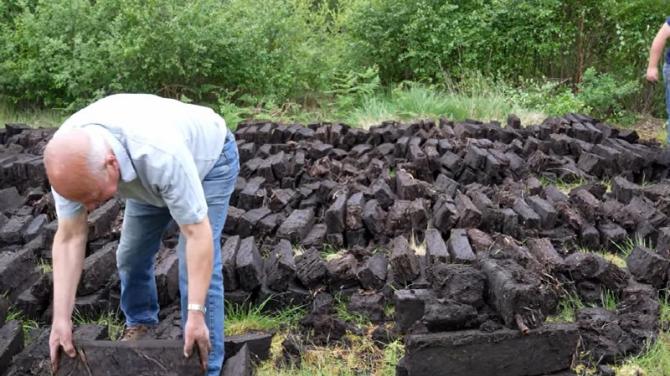 A RANDALSTOWN pensioner has become an internet celebrity after a video of him cutting turf went viral.

At the time of writing, the clip had received over 20m views, more than most popular soap operas!

It all started when Derek McDonald uploaded a video of his father George cutting turf for burning in his home fire, to social media channel TikTok

George has been doing the task since the mid 1970s, using a special spade that is at least 100 years old.

The item caught the attention of the Awesome Earthmovers team, and Chris Maginnis from ‘the dedicated hub for all things heavy plant’ came out to film his own version of the clip - and the earth then really began to move for George and his family, with attention coming from all over the globe.

Chris even tried his hand at the skill and said it was ‘harder than it looks’.

The video, which can be seen across a range of digital platforms, also stars Derek and his 21 year old son Jack, showing that three generations of the family are involved in the ancient tradition.

The earliest account of turf cutting among the Celtic peoples of northern Europe is in Pliny’s Natural History, which describes the harvesting of turf during the first century AD among the Germanic people between the Ems and the Elbe - the Chauce - on the North Sea coast of Germany.

Turf is cut by hand with a turf spade or slane (sleaghdn).

This is used to slice the turf into rectangular 'sods’ (a rectangular piece of turf anywhere between 15 and 60cm in length).

The turf then has to be dried, before the sods are placed into triangular formations known as a stack.

This process is called stacking or footing.

Depending on the family, weather or bog, the turf is then either placed into larger stacks, put in bags or removed via tractor and trailer.

It is then stored in a dry area until winter when it is burned.

Earlier this year, the Irish government defeated an opposition motion to stop plans to restrict the commercial sale of turf.

The government won the vote by 72 votes to 64 after giving assurances that people would still be allowed to cut and save turf from boglands as they had done traditionally.

The environment minister and leader of the Green Party, Eamon Ryan, had proposed a ban on the sale of wet wood, smoky coal and turf from September 2022.

He said this would reduce the number of people – estimated at 1,300 – who die annually in the Republic of Ireland because of air pollution.