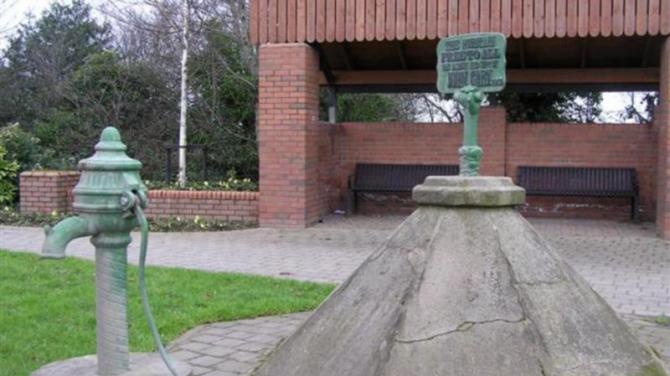 THIS week during the Antrim Guardian’s jaunt down memory lane, we came across the curious tale of Toome’s John Carey.

Traces of his fame still remain around the borough - an ornate family grave in Duneane, a plaque on the local primary school, a fountain and pump in the middle of Toome.

But who was this enigmatic individual?

Carey, John was born just over 222 years ago on June 15 1800 in Duneane, probably in the townland of Cloghogue, son of John and Margaret Carey.

John later claimed a distinguished lineage, but though he inherited property from his father in 1842, the family was not particularly wealthy.

He attended local schools, and entered Belfast Academical Institution when he was about 20; in 1834 he was licensed as a Presbyterian minister by Ballymena Presbytery.

On April 2 1839 he was ordained in Albany, County Tyrone, the very first minister of the congregation but moved the next year to Brookvale, County Down.

But after two years, he was suspended by the local presbytery for ‘prevarication’ and alleged forgery.

But worse was to come.

After the General Assembly continued the suspension, Carey was then accused of the attempted murder of a neighbouring minister, Joseph Dickey of Rathfriland, who had been his opponent: Dickey was shot and wounded by an unknown man while praying in his pulpit on 26 February 1843.

Others claimed to see Carey ‘practising’ in the days leading up to this dastardly deed, when he was seen leaping hedges and ditches about his own home.

Carey’s alibi was not the strongest, but he was released and went to ground for up to seven years.

Some say that he retired to his parents’ home near Toome, others that he emigrated to seek his fortune in either America or Australia.

He then reappeared as a flax merchant, and in 1850 came to live at what he called Rarity Cottage, Toome, apparently with a large amount of money in his back pocket.

The house looked akin to something from a fairy tale, with Willy Wonka-style barley sugar gate pillars and a wrought iron gate decorated with cats, ducks, hens and squirrels as well as equally ostentatious garden furniture.

He continued to pile up cash, by selling Lough Neagh sand, involvement in the local eel fisheries, and by lending money at extortionate rates; a penny per shilling per day.

Canny Carey justified this by claiming that he was teaching his clients ‘salutary moral lessons about the evils of usury’.

Such ‘lessons’ helped him acquire even more money, land and property.

While he had a reputation for penny-pinching, he was said to have secretly helped some of his poor neighbours and gave back to the Presbyterian church.

He took a great interest in the work of missionaries in India, founding a studentship for intending missionaries, paying for a church in Gujarat and establishing the Carey lectureship, a series of six to ten lectures delivered annually in either Assembly’s College, Belfast, subsequently the Union Theological College – or Magee College, Derry.

Carey also supported efforts to have the lower Bann valley drained, and publicly backed the tenants’ rights campaign; indeed, he was chaired through Magherafelt after a meeting in 1869.

Perhaps his most well-known achievement came from a fall-out with the establishment.

When in 1866 the local landlord, Lord O’Neill, refused permission for Toome village hall to be used for a liberal political meeting, Carey built his own venue instead.

He constructed a ‘most elaborate’ meeting room, which seated 1,500 people, with a library of 5000 books, a pipe organ which cost £600, and numerous statuary busts.

He called it ‘the Temple of Liberty, Learning, and Select Amusement’ and like the man who designed it, it was well known throughout the land.

Carey also gave back to the community where he grew up.

He built a small school and a water pump for Toome, and endowed a charity to provide clothing and blankets to the local poor.

Described as ‘peculiar and solitary’ after Lord O’Neill successfully prosecuted him for libel, Carey was described in his obituary as ‘a popular figure throughout Ulster’.

He died unmarried on August 23 1891, without any close relatives; he intended by the provisions of his will and of earlier trust deeds to leave his estate of about £10,000 to the Presbyterian church and to charities, but serious legal problems ensured years of litigation and consequent attrition of the property.

In 1911, the Temple of Liberty was burned down, possibly by local people who had a grudge against the new owner.

In order to fulfil one of the conditions of the bequest, J. M. Barkley, the Carey lecturer in 1955, delivered a lecture in front of the ruins of the Temple, though he reportedly had ‘only one human and one goat as audience’.

Carey erected it in 1860, thirty-one years before his death; it has a wrought-iron railing shaped like human arms, and a peroration on the Carey ancestry, citing Burke’s Landed gentry, and praising Carey’s generosity and other personal virtues - how modest.

Even in death, controversy followed Carey.

In 1898 a Belfast carter, Fredrick William Carey, claimed to be not only Carey’s rightful heir but also heir to two Carey peerages and estates in England and the ancient title ‘Lord Falkland’.

Other claimants and law cases contested the claims.

But grandiose claims seemed to run in the family - Carey himself claimed to be a relation of the sister of Anne Boleyn!

In his epitaph, Carey had proclaimed: “The Carey connection, was a very ancient race, variously settled in the Counties of York and Devon in England, of Fife Scotland, with Irish branches at Inishowen and Dungiven.”

The legal actions rolled on for years, involving very many top solicitors, watching claimant after claimant fall by the wayside.

In the book Quiet Places of the Lower Bann Valley, published by the authors John Hughes and Donal Barton, at the entrance to the Gloverstown Road, is described: “the eight sided Fountain of Liberty, erected by John Carey, with its water pump and a hand holding an iron rod, on which is mounted a dedication plate announcing that the water is free to all, is to be seen.

“Further along this road we will pass another of the Carey legacies, a pair of whirly gateposts and well designed gates.

“About a mile further along is to be found the tomb where he was laid to rest in Duneane Presbyterian Churchyard, which is in keeping with the man.

“Three large tablets containing in excess of 1,500 words that includes quotations from the Old and New Testaments as well as the history of his family from their establishment, right up grasping arms with interlocking hands supporting the corners.

“This burial plot stands out in this quiet country graveyard and is well worth a visit.”

One of the inscriptions reads: ‘In life he was most ingenious, persevering and benevolent: in death, an example to all for these great, moral virtues’.

On Rarity Cottage, they observed: ‘He refurbished the cottage and had a flair for designing gates and pillars.

‘John Carey employed a housekeeper named Kate Sheppard a loyal servant who also assisted in keeping his cost of living to a minimum especially by altering and mending garments on his behalf, when feasible.

‘She did not engage in or encourage tittle-tattle, anyone asking pertinent questions relating to her employer’s past was given the silent treatment and kept at arms length.”

They continued: ‘He was a staunch supporter of liberal principals, campaigned for land reform, was firm in his opposition to home rule and lived to the ripe old age of 91’.

And it was that housekeeper who found him dead in his armchair.

An obituary in 1891 read: “The late Mr Carey bad been for many years a popular figure throughout Ulster.

“From his youth he look a lively interest in the Presbyterian Church, of which he was member.”

Skirting over the business of a murder allegation, the obituary writer noted that Carey left the church after the death of his father.

“The late Mr Carey was regarded as a man of eccentric disposition.

“But his life and death bear evidence of that true kindness and deep interest in the welfare of his fellows which are ever found associated with the noblest natures.”

It was noted that he had left the greater portion of his fortune in bequests, in keeping of trustees, for various objects in connection with the Presbyterian Church, and the Temple of Liberty.

It was said that his various bequests amounted to about £10,000, a princely sum in those days.

It was his express wish that the Faculties of both the Magee and Assembly’s Colleges should attend his funeral.