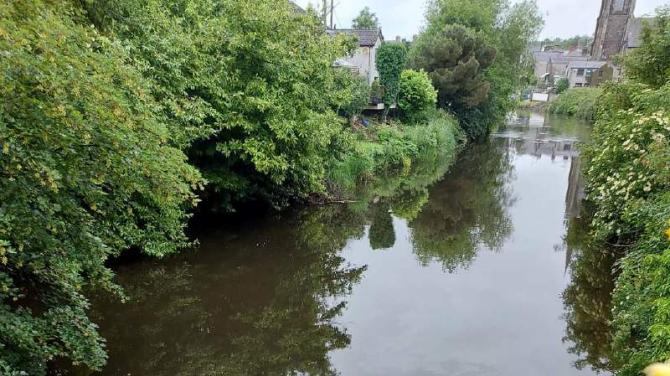 AN investigation is underway after a pungent oil spill in the Six Mile Water in Antrim.

A Riverside resident, whose home backs onto the watercourse, raised the alarm, posting on social media: “Bad oil spill in the river.

“Not sure how far it has spread, but a very strong smell off it.”

The Minister made his announcement during a visit to Ballyclare, where over the past number of years there have also been a series of pollution incidents.

The campaign involves stakeholders marking footpaths and kerbs near surface water drains with a Yellow Fish symbol, to communicate the message ‘only rain down the drain’.

It is hoped that this simple, visual prompt will remind people that what is put down those drains flows directly to the nearest waterway, thus causing pollution and environmental damage.

The marking of storm drains will be led by the Six Mile Water Trust, which is a Rivers Trust that has a keen focus on pollution prevention and monitoring water quality.

The NIEA campaign has been co-ordinated with the help of Antrim and Newtownabbey Borough Council, NI Water, DfI Roads and DfI Rivers.

Antrim Alliance councillor and nature lover Neil Kelly expressed his concern at the oil spillage reported to him on Friday by a resident of Riverside.

Councillor Kelly said: “I was contacted by a resident who was worried about the sight of oil on the river at the back of Riverside.

“I was sent photos of the oil on the river and was told by several other people there was a very strong petrol like smell in the area.

“I immediately phoned the Northern Ireland Environmental Agency pollution line and reported the incident and followed that up with an email regarding the exact location and photos of the oil on the river.

“I was told a staff member would be dispatched to the scene to investigate what had occurred.

“I am concerned at this recent episode of pollution and do hope those investigating this incident find out what caused this and whether it was accidental or intentional.

“We have a beautiful river with an abundance of wildlife including salmon, dollaghan, kingfishers and of course the lovely otters that give people so much pleasure watching them play close to the river bank and the path.

“I really do hope we get to the bottom of this and if indeed this was intentional then those responsible need to be brought to account and face the full rigour of the law.

“We need to do all we can to protect our natural environment and ensure the beauty of Antrim’s Sixmile River is there for all of us to enjoy now and in to the future.”

There are also concerns after three dogs died near the Six Mile Water’s entry into Lough Neagh at Antrim’s Loughshore Park in recent weeks.

The Six Mile Water Trust confirmed that they were also aware of the incident and that it had been reported to NIEA.