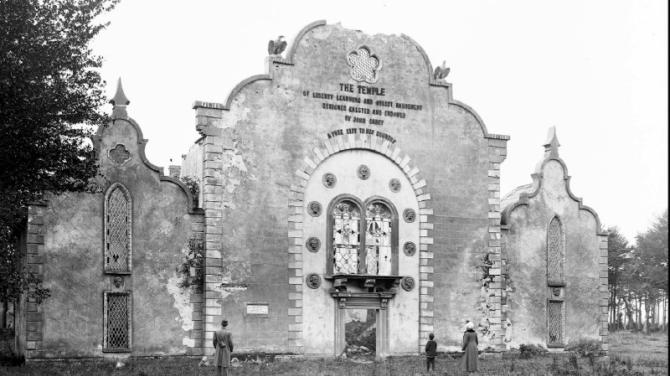 IN 1954, the Unionist MP for Mid Antrim wrote: “In the middle of last century he made regular trips through Toomebridge, wheeling a barrowful of sovereigns, and always accompanied on these occasions by his faithful housekeeper.

“Carey’s greatest interest in life, nevertheless, seems to have been making gifts for public benefit.

“Peculiarly enough, at the same time he was well known for being miserly.”

Mr Simpson said that the Temple of Liberty, like the more famous one at Jerusalem, was dedicated to ‘a lofty ideal’, but was really to ‘annoy and get revenge on his enemy, John O’Neill’.

“In those days, the eel fisheries were rented yearly and on the basis of a tender.

“Since they were the only two persons interested in working the fisheries, they felt that by keeping the tenders low, they could work in partnership at a very low rent, with considerable profit to themselves.”

Crafty Carey tendered for £10 more than the agreed sum - but the good Lord gazumped him by tendering £20 more.

Carey, said Mr Simpson, never forgave O’Neill and vowed that he would ‘see to it personally that he would never have a minute’s peace while he lived in Toome’.

So he set to building the Temple of Liberty opposite O’Neill’s house.

When completed in the late 1860s, there followed the noise and merriments of concerts, dances and soirees.

Said Simpson: “The temple was a fine two-storey building with a spacious hall to seat more than 1,000 people, plus a ground floor with schoolroom and various ante-rooms.

“It also included a well-proportioned and equipped library.”

On the exterior of the front wall were busts of Washington, Columbus, Newtown, Watt and in the main hall there were niches on the walls with busts of philosophers, musicians, novelists, scientists and theologians.

The ceiling was expensively panelled, Simpson said, with inlaid carvings and paintings of ‘mythological conceptions and various heathen deities, while the windows were of stained glass’.

“There are folk still living who attended dances and lectures in the hall.

“One lady remembers her first evening dress dance there, which was a most splendid affair, attracting the best people, so it was said, from Derry, Antrim and Tyrone.

“During the evening, John Carey himself arrived in their midst, dressed as usual in black hat and coat.

“This was a dramatic interlude, for the dancing was stopped while Carey played on the great pipe organ at the far end of the hall.

“The villagers of Toome regarded the temple as a great asset, although they knew well that a hall to accommodate more than 1,000 people in a village of a few hundred people was ridiculous.

“And so the Temple of Liberty came to be known as ‘Carey’s Folly’.”

Mr Simpson said that ‘ruthless’ Carey was keen to lend money to farmers on the security of their land, then suddenly he would demand repayment when the farmer was hard-pressed and he would then take over the land.

“Often it is said that John O’Neill came to the rescue and put up the money, so thwarting Carey in his designs.

“Carey was surely one of the strangest mixtures that ever walked this earth - astute businessman, architect, miser and philanthropist.

“When one reads the inscriptions on his various endowed buildings and the epitaph drafted by Carey himself, one cannot doubt that he was a real eccentric.”

One part of his headstone reads: “Founder of this monument, of the Temple Institution of Caryvale and of the dree fountain if water at Ballee, British India, for the conversion from heathenism there and of the foundation Carey Lectureship at Derry and Belfast and many other bequests, religious, moral, literary and charitable, now slumbers here.

“Lineage - a very ancient race, variously settled in the counties of York and Devon in England, of Fife, Scotland, and with Irish branches in Innishowen and Dungiven, renowned for courage, equity and learning, honoured with many State offices, elevated to the several peerages of Hunsden and Falkland, Monmouth and Devon, claiming kindered relation with the highest ranks in the Empire and a nuptial affinity with the Crown itself since the sixteenth century.”

Simpson said that Rarity Cottage remained: “One of the loveliest thatched, white-washed cottages in the county.

“In the wrought iron gates, the figure of a black cat is repeatedly worked into the design.

“Sometimes the black cat is playing with a mouse, and I cannot help think that the idea resembled the kind of life that Carey led.”

At his own request, his body was borne to Duneane, in the words of his own will ‘not by horses, but by his kindly fellow creatures’.

Simpson explained: “The bachelor Carey drew up his own will incorrectly and the whole estate of over £20,000 was thrown into Chancery.

“There were various claimants to hand, but finally Mr William Carey, a tailor and farmer from Broomhedge near Lisburn, was established as the heir at law and to him passed the ownership of the Temple of Liberty,”

The Temple soon fell into a state of poor repair, but was visited by numbers of tourists, who sometimes recorded their visit by writing or carving their names on any vacant space on the walls.

Simpson concluded: “At the beginning of this century, the building was gutted by fire.

“Today only a small piece of the once-grand building remains and is used as a cattle shed.

“But every now and again the plough turns up some old bust of Wellington, Nelson or Napoleon as a reminder of ‘Carey’s Folly’.”

And in 1911, reports from the British Newspaper Archive showed how keenly the loss was felt.

“A building known as the Temple of Liberty was completely destroyed by fire and there are allegations in the district that the outbreak was the work of malicious persona.” wrote one breathless scribe.

“The building stood in spacious grounds about a mile from the small town of Toomebridge, and was erected and endowed by the late Mr John Carey, a Presbyterian minister of some eccentricity, whose philanthropy made his name well known during his lifetime, and the disposal of whose estate brought it into even greater prominence after his death.

“Among the numerous schemes which Mr. Carey carried out was the establishment of the Temple.

“In large letters above the portals of the hall were the words: ‘Temple of Liberty, Learning and Select Amusement, dedicated, erected, and endowed by John Carey. A free gift to his country.

“The founder dedicated the temple to religious moral, educational, and charitable objects.

“Niches in the wails were ornamented with the busts of poets. orators, dramatists, novelists, philosophers, and musicians.

“The building was one of ‘the sights’ of the north of Ireland, and was visited every year by thousands of strangers.

“Its destruction has caused much regret throughout Antrim.”

Another report said: “Fate must have leered the tragic spectacle of the burning of the grotesque edifice which years ago the late John reared with such infinite expenditure thought, ingenuity, and money on the green plot of ground subjoining the railway at Toome.

“An ardent Liberal and land reformer, and one of the most eccentric of men, John Carey devoted some the best years of his bachelor life to the erection and embellishment of his strange-looking Temple of Liberty.

“Its walls, externally as well as internally, were adorned with carved faces of the great ones of the earth, nine of them forming an arch over the main entrance and the whole building, with its hall and anterooms and fine pipe organ dedicated to art, science and industry.

“But he made no provision for the maintenance of this pile of folly after his death, and for many years past it bad been in a mournful condition of neglect.

“Now the fruits of the old man’s laborious eccentricity have vanished in flame and smoke.

“The catastrophe is to be regretted for public reasons, as Carey’s Temple of Liberty had become an object of interest in that part the country and was visited by numerous tourists and others in summer seasons.”

Only the foundations of the Temple exist today, still B1 listed, while Union Theological College is said to have a very fine portrait of John Carey hanging in the Faculty Room.