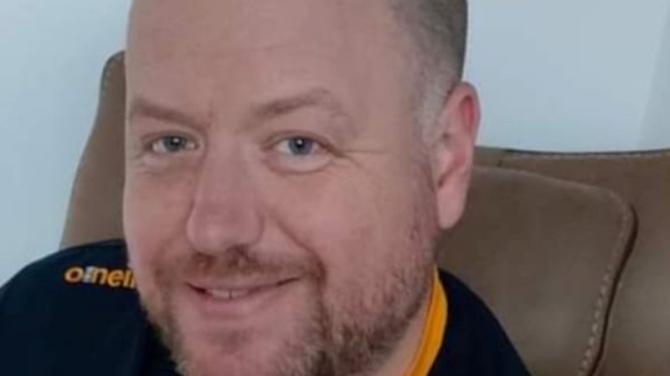 WARM tributes have been paid to local councillor and ‘consumate family man’ Glenn Finlay at his funeral in Randalstown this week.

A large crowd, many wearing colourful clothes or band T-shirts as requested by the family, converged on St MacNissi’s Church to bid a tearful final farewell.

Father John Forsythe told the mourners that there had been a papable sense of shock since the 41-year-old father of two died suddenly on June 15.

“In a situation of a sudden death, it’s almost like a bad dream,” he said.

“All we really want is the person back again.”

And, of course, that was particularly the case for loved ones left behind.

Father Forsythe said that Glenn was ‘wholeheartedly, number one, a family man’.

Three years after he met wife Kelly in October 2011, the couple were married in Cyprus.

He had not only gained a wife, but also a ‘ready made family’.

The congregation herd that Glenn affectionately referred to Kelly and daughter Caitlin as ‘big wife and wee wife’.

A close bond was also forged with guitar-playing son Dylan, though his taste in music was ‘more eclectic than Glenn’s ever was’. Nevertheless, songs from artists such as Nirvana, Queen and David Bowie were regularly ‘blaring’ from the car.

Professionally, the local man had flourished too.

Glenn embarked on post graduate study to ‘upskill’ before he found ‘rewarding work helping the marginalised’ who had endured a difficult start in life.

The Parish Priest noted that among the many to pay their respects following Glenn’s death were representatives from the Extern organisation.

“People often dismissed, found in Glenn a man willing to believe in their potential,” he said.

He also spoke of Councillor Finlay’s involvement in local initiatives to develop the town such as Tidy Randalstown and his ‘innate interest in thinking up ways of improving this community, some that ‘flied’ and some that died but that did not deter him from pursuing’.

His interest in community issues saw him enter politics, taking 989 votes and a council seat at the first time of asking in 2019, representing the Dunsilly ward.

Many of his council colleagues were present at the funeral, including Chief Executive Jacqui Dixon and Councillors Tom Campbell and Julie Gilmour who did scripture readings.

“He was a man out on the streets being seen, being relevant – a big man, he was not easy to miss or easy to avoid,” said Father Forsythe.

“We will miss Glenn but his loving family will miss him most.”

He proceeded to thank mourners on behalf of the Finlay family for their kindness in being a ‘wall of support’ during the past few days.

His son Dylan also went on to deliver a moving tribute, saying he had been ‘a great husband, a great father, and for an unfortunately short amount of time with Grace, he was on his way to becoming the best granda’.

“You did so much good for people, all those charities you started up and supported, and always made sure to do it with a smile.

“Before I go I just want you to know I’m running down the path you walked, because you paved it for me.

“I’m just so proud of you. I just wish you’d come home.

“I realise now I need to come to you. When that day comes I hope you’re waiting for me to give me a hug.

“Dad, I love you so much and will never stop thinking about you.”

In a heartbreaking post on social media, wife Kelly said: “We will continue to hold you close.

“You were my best friend, my go to and the brilliant and the proudest father about.

“We are devastated but we have each other and we will do you proud.”

After the service, the cortege proceeded to Roselawn Crematorium.