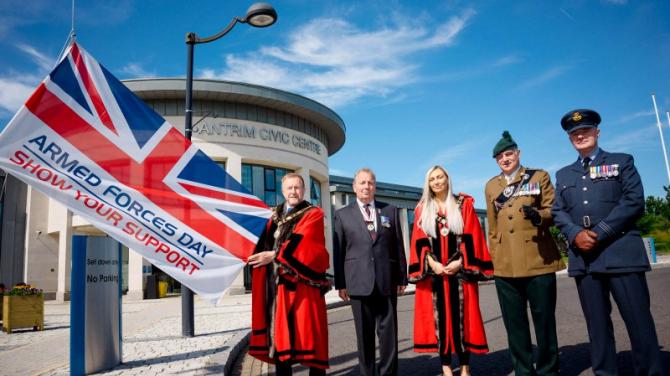 THE Mayor of Antrim and Newtownabbey, Alderman Stephen Ross has said he felt honoured to raise the Armed Forces Day Flag this week.

The ceremony was held to show support for the men and women who make up the Armed Forces community, from currently serving troops to Service families, veterans and cadets.

The Mayor was accompanied by Her Majesty’s Deputy Lieutenant for the County of Antrim and Veterans’ Commissioner, Danny Kinahan; Army Lieutenant Colonel MC Jamison and RAF Squadron Leader M Mayo.

The flag will fly at both civic buildings for one week, leading up to national Armed Forces Day on Saturday 25 June.

“The Council recognises the immense sacrifices that the personnel of the Armed Forces have made in many wars and conflicts, and would like to pay tribute to the gallantry of those brave men and women,” said the Mayor.

“By raising the Armed Forces flag today, we honour each and every one of them.”