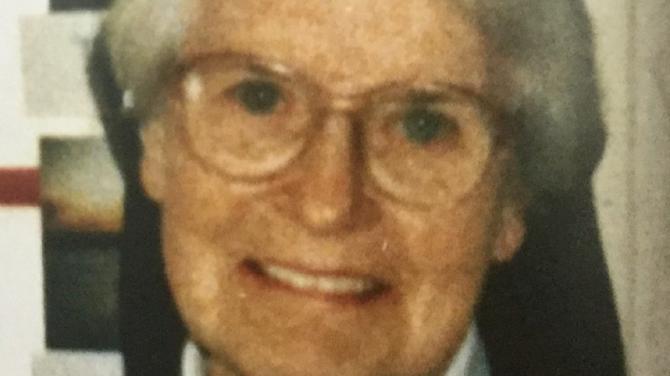 A FLOWER belonging to one of the founders of the Family Caring Centre in Antrim is being replanted and accompanied by a special plaque this week.

Back in 1984 Bishop Cathal Daly called on the Sisters of Our Lady of the Missions - who had been founded in France back in 1861 - to set up in Antrim to assist women and children living in the town’s estates.

In total, five Sisters heeded the Bishop’s call to act, and later that year they took up residence in the town’s Rathenraw estate.

Another regular visitor was Sister Mary Kelly who, rather confusingly, was Sister Clement’s sister!

Both had heard the religious calling early in life.

When Sister Clement was just 10 her father died leaving her mother to bring up a family of three girls and seven boys.

During the summer of 1932 the Sisters of Our Lady of Missions from Limavady called at the Kelly family home.

Anne, who would later become Sister Mary Clement, was just 14 at the time - and she knew what she wanted to do with her life.

She asked her mother is she could become a boarder prior to entering the Novitiate at Hastings in England, and she agreed.

She crossed the Irish Sea two years later, and in March 1937 she made her first Profession as a Sister. In 1941, having trained as a teacher, she embarked on a teaching ministry that would span three decades. Along the way she became Head of Sacred Heart Primary School in Leeds before returning to Hastings in 1973 to be the Superior of a large community there.

But when the call ‘home’ came, she was ready. Yes, the work would be challenging - Rathenraw at the time was blighted by high unemployment and problems associated with families ‘displaced by the Troubles’ - but she felt ‘privileged’ to be one of the founding members.

The Sisters took up residence at 1 Somerset Park, the first of five houses in a row.

Very soon, however, they were keen to expand.

For while it was initially envisaged that their work on the estate would be Pastoral, hands on experience of the difficulties experienced by people on the ground sparked an altogether more ambitious plan.

Sister Mary Clement felt there was a need to create ‘a space’ where people could come together - so on October 6 1984 the Family Caring Centre was opened.

It started modestly enough, with a thrift shop in a caravan - but the Sisters knew they could achieve much more if they had a more permanent base.

She quietly slipped Miraculous Medals over the fences of the other houses in the row and left it to the Lord to do the rest.

As each house became vacant she lobbied the Housing Executive to sign them over - and they did.

From those humble beginnings, the Caring Centre has gone on to offer an astonishing range of children’s services, adult services and programmes aimed at empowering local people. Better still, the services were ‘for all’ irrespective of age and creed - and it continues to thrive today.

It stands as a monument to one woman’s tenacity and vision - a truly remarkable achievement.

Away from the Centre, the Sisters continued to make their presence felt.

Sister Helen Currie worked as a health visitor but in 1987 she was asked by the Congregation to go on mission to the Philippines, where she worked for several years in a mountainous region known as Kulaman. Later, Sister Helen was transferred to France.

For the rest, the work in Antrim continued - but, sadly, none were getting any younger.

Sister Teresa McGovern continued her missionary endeavours in Antrim until 2001 when her health began to fail. She died in 2008 and was laid to rest on October 7 - the feast of the Holy Rosary.

In 2002 Sister Mary Clement had handed over the management of the centre to experienced staff, taking on the role of President instead.

But by August 2008 she decided that her mission was over, and she moved to Dublin.

“As I approach my 90th birthday and reflect on my years that have gone by, I turn to God with deep gratitude - firstly for all the graces and blessings I have received, secondly for my parents and members of my natural family and very importantly for the Sisters of my religious family,” she said at the time.

“I pray to God to bless and reward all who have helped me on my way.”

But her ‘retirement’ was to be short-lived.

Just two years later she became sick and tests confirmed that she was terminally ill - a diagnosis she accepted with typical stoicism.

It was said that she slipped away so peacefully that ‘it was difficult to know the moment’. She was laid to rest in Mount Venus Cemetery in Dublin.

Sister Mary Clement was a huge loss, but in her absence Sister Catherine Corrigan continued to minister in the Parish of Antrim.

Sister Mary Scullion served the Parish of Randalstown for many years too followed by Sister Veronica Kerrins and, latterly, by Sister Carmel Looby.

In July 2017, and with little fanfare, the congregation withdrew its presence from Antrim due to ‘lack of personnel and declining numbers’.

It was the end of an era, but the Sisters had left an enduring mark on the community they served.

However the sisters’ lasting legacy, The Family Caring Centre, continues to go from strength to strength.

The original purpose was to provide training, information, advice and childcare services to families in the area who were suffering from social deprivation as a result of deteriorating housing and high unemployment.

Today, over 250 families benefit from the range of services that are currently provided and generations of young people have been assisted.

The Good Morning Antrim Telephone and Alert Service, in operation since April 2008, is funded by the Public Health Agency and aims to reduce the feelings of fear and isolation felt by the elderly and other members of the community.

People are contacted by telephone at pre-arranged times, and can have a chat about their health, well-being or other area of interest, learn about services and events in their area or discuss concerns which can, with permission, be passed on to other agencies or signposted to other services.

The service is available for people living in Toome, Randalstown, Antrim, Parkgate, Templepatrick and Crumlin.

The service provided a real lifeline to those struggling during the Coronavirus pandemic and food parcels were delivered far and wide.

Meanwhile, the Learning Zone provides opportunities for all abilities to access accredited computer training classes and clients can work at their own pace with a qualified and experienced tutor.

It promotes ‘lifelong learning’ and helps adults and young people in small groups to master the internet and email and other digital skills.

The Depression Support Group meets at the Family Caring Centre and is again open to anyone living in the old legacy Antrim council area.

It is supported by Aware NI and is hosted by trained facilitators in a safe, respectful and confidential environment.

Accommodation is also provided for counsellors from various organisations including the Nexus and Lifeline charities. and the premises hosts supervised ‘Child Contact’ meetings for the NHSCT Children with Disabilities Team and provide space for other local charities to meet including Links to Pink.

After battling the implications of a stroke in 2018, Alison developed cancer and passed away in February 2019.

While she was originally a Belfast woman, Alison adopted Antrim as her home after moving back from England in the late 1970s.

Fresh into the town, she first threw herself into youth work at St Comgall's Youth Club. As a youth worker, she helped a whole generation of young people in the town.

Then she moved to the Family Caring Centre.

There, she was half of a formidable partnership with her friend, the late Betty Given, both instrumental in continuing to build up great facilities for the community.

She also helped people in their lives, supporting them to access training and develop their abilities to truly fulfil their potential.

Current manager Louise Goodman, who has been with the centre for around 15 years, said she has ‘worn many hats’ over the years.

After a career in retail, Louise worked part time and trained as a counsellor as her kids grew up.

Louise, a former Rathenraw resident who now lives in Randalstown, initially came to the centre on placement and ended up becoming a community liason.

She then took over the Good Morning Antrim service and became acting manager when Alison’s health began to fail, in charge of what she calls a ‘small but mighty’ team.

At the helm, she oversaw a complete overhaul of the dated and creaking IT and telephone services and a tidy-up of years of paperwork..

At the same time, the Grenfell Tower tragedy meant that the former Housing Executive properties underwent a refurb to bring them up to new fire safety regulations.

The ugly and forbidden wooden fencing, which had provided cover for burglars for many years, was replaced with a new security fence, opening up the building to the rolling green and mature trees surrounding it.

The Centre has since celebrated its 35th anniversary and new improvements are being undertaken all the time.

And it’s Louise and her team who have managed to salvage a beautiful ‘Cala Lily’, which had lain in the garden of the centre’s original founder Sr. Mary Clement Kelly, for many years.

Now the centre is remembering and paying homage to her work by placing a plaque in the garden beside the plant, with staff creating a special area to honour Sister Mary.

The new Mayor Stephen Ross will visit to officially dedicate the plaque and new garden area on Monday July 4.