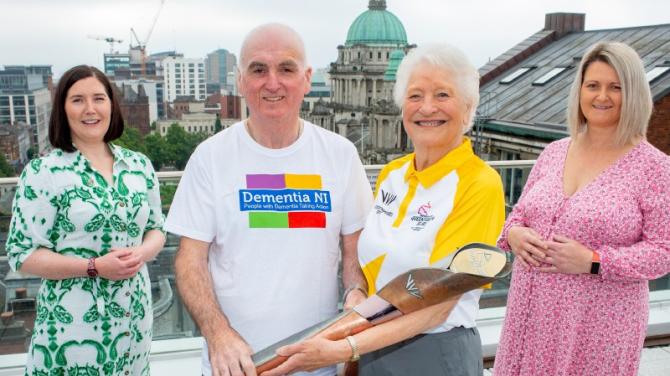 DEMENTIA NI founder and Toome man John McErlane has become one of the first people to carry the Queen’s Baton in Northern Ireland.

John received the baton at the Belfast offices of PriceWaterhouseCooper (PwC) who host Dementia NI’s life-enhancing Empowerment Groups and kicked off the baton’s four-day journey around Northern Ireland, ahead of the launch of the Commonwealth Games this summer on July 28.

A spokesperson for the charity said: “We are overjoyed that John is the first person from NI with a unique and inspiring story to receive the baton, which has now been passed to other charities and organisations.”

John, 64, from Toomebridge, who spent his career as a fisherman and was diagnosed with dementia in his early fifties in 2011, has achieved extraordinary success in setting up Dementia NI along with four other people with dementia in 2015.

His outstanding commitment to challenging the stigma and preconceptions of a dementia diagnosis has helped lay the strong foundations for the organisation.

Along with his fellow Dementia NI founders, John has gone above and beyond to ensure those who receive a dementia diagnosis in Northern Ireland are not alone through Dementia NI’s peer support service, which puts people with dementia in touch with others in the same boat.

John said, “I am pleased and privileged to have this once-in-a-lifetime opportunity to represent people with a diagnosis of dementia across Northern Ireland. Our mission at Dementia NI is to help make Northern Ireland a better place for people with dementia.

“The ethos of our founding members, of which I am one, is for people with dementia to have our voices heard. So to have the opportunity to speak on behalf of Dementia NI on this big platform is humbling and mind-blowing!

“With this opportunity I want to send a message to people that you can live a good quality of life and continue to achieve things with dementia, even if you have to make a few adaptations, and for people who aren’t familiar with the condition to not make hasty judgements about what we can and can’t do.

“I would also like to reach out to those people and families who may be finding a dementia diagnosis difficult to accept and encourage them to come forward to Dementia NI for support. It may be useful for them to talk to someone in the same situation who can help them to make sense of the difficulties they are experiencing.”

John has defied common misconceptions of what a person with a diagnosis of dementia can and can’t do. A former deep-sea fisherman, John has a passion for making and repairing nets and building model boats. His main interest is in travelling the world and he loves nothing more than getting away on cruise ship holidays.

The baton is now on its 294-day long journey to every corner of the Commonwealth. It arrived in Northern Ireland on June 24 from Scotland for a four-day celebration before travelling to Wales on June 29. The relay began on October 7 2021, with Her Majesty The Queen placing her message to the Commonwealth into the baton.