Veterans chief recalls his time in hot seat on the Falklands 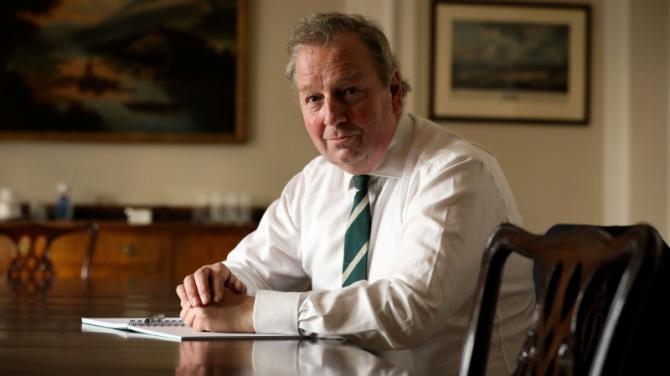 TWO Tuesdays ago I had the honour to be a guest at the National Arboretum to mark the 40th Anniversary of the successful campaign to retake the Falkland Islands from the Argentine military junta.

I felt a bit of a fraud as I was there as a VIP in my role as Veterans’ Commissioner for Northern Ireland when my former Blues and Royals colleagues who had fought all the way through the campaign were not.

I spent six months in the Falklands a year after the war as the Officer in charge of running the headquarters and operations room. I could so easily, though, have been one of those two troop leaders in 1982.

The service brought back many memories of 40-years-ago.

The Falkland Islands had a population of around 1,800 in 1982, almost all of whom were British families.

When there I did meet one Chilean family and I think they were the only non-British. Most of the population lived in Port Stanley with Goose Green and Fox Bay the other two main settlements.

The islands are the size of Wales with large swathes of mainly bald treeless rough grazing land interspersed with ridges of mountains double the size of Slemish but topped with large broken boulders and surrounded by boggy peat.

When there I had a cross country trials motorcycle and, when off duty, I would explore the surrounding countryside, especially the mountains such as Tumbledown.

Occasionally I dismounted unintentionally over the handlebars as I sank in a bog or failed to jump a ditch and, just as often, I broke spokes or snapped the chain on the rocks meaning I had to carry the bike or part of the bike back as I yomped home.

This gave me a reasonably good idea of the grit and determination that those in the war must have had to have to assault these mountains with perpetual wet feet and the threat of twisted ankles of worse.

Further dangers included the minefields which were fenced off but clearly marked. There were many stories of how the plastic mines floated downhill in the boggy land and under the fences demanding a certain wariness.

Those fighting the war did not have that luxury and many appalling injuries were sustained by them.

The islands have their own weather system and you could plot the rain and sleet storms on a map with the wind speed and ensure you were in cover as each storm passed.

I was there in spring and summer but the troops there were not that lucky, nor of course did they have the freedom of trials bike for exploration.

They were facing crack, fully armed troops on top of each mountain, dug in and armed to the teeth, with those same minefields unmarked between them and their positions. Snow, sleet and driving bitter wind was the norm for them.

When the task force was put together our troops were previously training with the Parachute Regiment and each were learning how light tanks and infantry could best work together.

The Blues and Royals were to provide light armoured reconnaissance support and I was told my squadron was to get ready to go. My troop had just won troop tests and suddenly here was a chance to do what we had been training for.

Holding my school atlas up on the pages showing North and South America I remember the incredulity of my troopers when I pointed our destination at the bottom of the map where the Falkland Islands are.

The powers that be decided half way though the training that our light reconnaissance tanks were not needed and were not to go as part of the main invasion force, but to be ready if called.

It was now our leave period and so we dispersed, only for the senior officers then to decide at the last minute that two troops should go. As my squadron was now away, it was not to be us and, I have to admit, our disappointment was huge. We were still to be first reserve.

Frustratingly we had been the enemy on the pre campaign exercise in Wales where 5 Brigade (based mainly on the Household Division and the Welsh and Scot’s Guards Regiments) was to practice their skills and prepare for Falklands terrain and weather.

Our light reconnaissance tanks were to be the enemy. We were pretty successful and the Brigade extended the training period and I believe that is why there was a change of heart.

Each troop consisted of two Scorpions and two Scimitar light tanks (only 8 tonnes) armed with a 76mm gun and 30mm cannon respectively.

In Wales I remember managing to manoeuvre around 5 brigade by climbing up a long steep 45 degree slope with my skilled drivers inching up what seemed to be an impossible climb and we subsequently ambushed them as they approached down a long deep narrow valley. I remember clearly the thrill of having Harrier jump jets supporting our ambush too.

On one occasion I remember my driver jumping out to clear an obstacle and watching him sink up to his waist in a bog whilst the light tank sat on its tracks hardly sinking at all. These vehicles were ideal for the Falklands terrain but this was not known well enough throughout the higher levels of command. (In Wales we had exceptionally good weather which of course was the opposite of the miserable weather experienced over the two months of the campaign.)

Both the Blues and Royals troop leaders were mentioned in Despatches, one having his own tank destroyed by a tank mine as he carried out a diversionary attack on Mount Tumbledown. He carried on directing the attack from the outside of another of his tanks which was also in the minefield and all the time under enemy machine gun and mortar fire.

Sadly the Blues and Royals were not used at Goose Green but came into their own when joining in on the yomping across East Falkland island to retake Port Stanley. The Marines, Gurkhas and Paras were yomping across this extraordinary difficult stony and boggy ground with incredibly heavy kit and twisted ankles and knees meant motorised light armour was a godsend to many.

The Scorpion tank could provide this brutal but incredibly effective weapon on these Argentine positions and it was one of the crucial weapons used against dug-in troops.

If you watched the recent BBC programmes interviewing Marines, Guardsmen and members of the Royal Navy and Royal Air Force you will have heard how professional and how brave those taking part were.

The grim accounts of hand to hand fighting, traumatic injuries and hard, miserable slogging across incredibly difficult terrain don’t really do justice to the heroism and horror of it all.

Watching again the ships being attacked by Argentine jets in ‘ Bomb Alley’ at San Carlos Water or the Welsh guards being rescued from the burning Sir Galahad and Sir Tristram, brings it all home.

I remember that extraordinary feeling when flying back from leave that I might never see my home or my family again.

Had the campaign not gone so well we were next to go.

I also remember all of us gathering daily in the mess at Windsor to watch the news of our colleagues and of all those taking part and wondering if we would ever see them again.

This concern would have been even higher for all the immediate families of those in the Task Force. It is not hard to imagine their angst too as they watched their loved ones on the very same news.

In my role as Veterans’ Commissioner I must ensure we never forget all that veterans and their families give and do for all of us as the defenders of our society.

I am told there are some 120,000 plus veterans here in Northern Ireland and if you include their immediate families then that means we have close to 500,000 people involved in serving their country at some stage in the last 70 years.

Suez, Malaya, Kenya, Sierra Leone, the Balkans, Afghanistan and Iraq and of course the Troubles here are just some of the key conflicts that our armed forces and their families have been part of.

The grim grit and determination of battle is what you join up knowing you may have to do, but peacekeeping and protecting civil society are the more regular role.

Supporting the civic powers is also frequent and all medical support during the Covid pandemic is a recent example of how the are a key part of our society.

The Falklands memorial service was a very strong nudge that we must look after them all.

My role as Commissioner is to be the voice of veterans and to do all I can to make sure the support they and their families need is available and provided the moment it is needed.

The Falklands had so nearly become a forgotten war and too often we allow those who served to feel they are forgotten.

The decades of local service here by the Ulster Defence Regiment (Conspicuous Gallantry Medal) who along with their families gave so much whilst protecting civil society and stopping a civil war feel similar.

Afghanistan and Iraq have recently brought the professionalism and heroism back into our minds but we must all never forget the skill and professionalism that makes our armed forces so respected worldwide.

Those soldiers, sailors and airmen who paraded at the Arboretum reinforced the need for my role and the need for everyone to reflect on a job well done.

When discussing my time there my neighbour asked if I remembered ‘Eileen’, her mother, who ran the local radio station. Indeed I did.

Daily in the Headquaters amongst all the noise of the Royal Navy, Army and Royal Air Force communications equipment we would have Eileen on the CB open station calling out messages such as ‘ hello Bluff Cove, hello Bluff Cove.. this is Eileen come in please’ or similar opening calls to outlying settlements as she followed up on delivery and supply of medical or farming needs.

Eileen played her own key role during the invasion keeping transmitting information for as long as she could before the Argentines closed her radio station down.

I remembered her for her ebullience and hard work on behalf of all her island compatriots. The Falkland islanders did not have it easy and are incredibly grateful to all who fought and helped get them their homes and way of life back.

This campaign was costly and we must never forget that 255 servicemen gave their lives nor those who were injured.

We also must remember three Falkland islanders also died and the Argentines themselves lost over 600 servicemen.

All those who attended the service or watched it on television will have many similar and more impressive memories of what they and their families went through.

We owe them all a great deal.