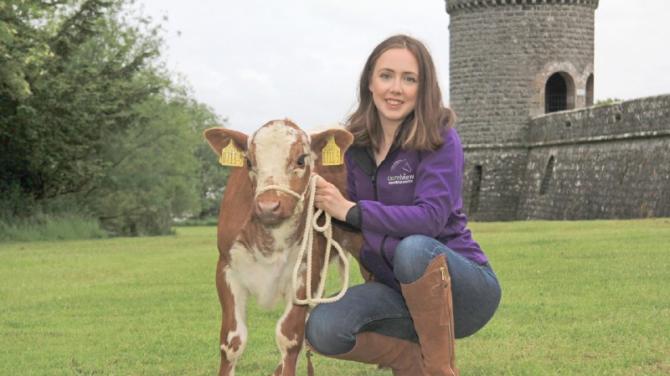 ANTRIM Show is returning to Shane’s Castle this month after a two-year break.

If you are looking for a day filled with all things country, there will be a fantastic display of award-winning horses, cattle, sheep and even a flock of alpacas to enjoy as the Randox-sponsored event comes back on Saturday July 23.

A crowd of sponsors, stewards, members, supporters and local YFC members recently gathered to find out what’s new since the last show in 2019, as entries were officially opened for this year’s event.

The sponsor’s reception was kindly supported by the Antrim and Newtownabbey Council and catered for by Randalstown YFC.

During the evening, the Antrim Agricultural Society donated £1,000 to its nominated charity, the Air Ambulance Northern Ireland, in memory of the late Robert Wallace, past Chairman of the Society.

This year, Fane Valley came on board as the show’s first Principal sponsor for Livestock, that also includes sponsorship for a new Dairy Interbreed Exhibitor of the Show award with a prize fund of £1,000.

In the beef section, it will be the first year that Antrim has hosted Irish Moiled Cattle Society’s national show, a native breed of cattle.

This year, Antrim will host the Finals of both the Thompson’s NISA Pedigree Dairy Cow Championship, and the Bank of Ireland NISA Pedigree Junior Bull Championship. These finals showcase the very best of Dairy cattle and Beef bulls in the province.

Antrim is also a qualifier for the ABP/NISA Pedigree Beef Heifer Championship, and for the Equestrian & Farm Feeds Ltd/NISA Clydesdale Championship.

Also in the Equestrian section, B Sweeney Equine Ltd has come on board as a new sponsor in the Show Jumping section, which has a total prize fund of £2,600.

All entries for this year's Ulster Regional Grand Prix Tour must be entered and paid through SJI Live.

In the home industries section, there will be a Special Prize for ‘Best in Section’ and a Special Award for the Allotment holder with the most points in the Horticultural Section. New classes have been introduced for a quilted mug bag, a rag rug and a decorated hard-boiled egg.

The Women’s’ Institute Team competition is back, with the title ‘Tea in the Field’.

Tributes were also paid to Jimmy Crawford, Patron of the Society, who passed away recently.

Jimmy had been involved with the Show for a lifetime and in addition to being Patron, most recently was the Director responsible for Horticulture and Home Industries.

In the sheep section, Clive Owen of fame from the TV show ‘Our Yorkshire Farm’ will be judging the Swaledales section.

Its new purpose-built grandstand has the added bonus of giving you a chance for a rest while you watch the against-the-clock spectacle.

Speaking at the launch of Randox Antrim Show, Chairman George Robson said: “This year’s event has only been able to return to the Shane’s Castle on Saturday 23rd July this year thanks to the much-needed support of many sponsors big and small, new and returning but also thanks to the hard work of our directors, members and volunteers.

“I’d like to give a special mention to Randox who’ve stuck by us as our title sponsor; Antrim and Newtownabbey Council for enabling our launch, and Lord O’Neill for access to the Castle’s beautiful grounds, which helps add to the family day out we annually put on for the benefit of those from both the rural and urban communities to enjoy.”

Randox Health will be at the show giving advice on the services they provide.

Representing the show’s title sponsor at the launch, Jason Webster, Randox Health Business Development Manager, commented; “We are delighted to maintain our title sponsorship with Randox Antrim Show and are fully aware of its importance to our local community, and more widely.

“After a two-year COVID-imposed absence we know that this outstanding event will lift everyone’s spirits and we congratulate Mr Robson, the organising committee and everyone involved on their efforts.

“As a global company, based in County Antrim, we understand the importance of this show.

“And after two years of COVID we will all wish to look to better times - and at the show Randox will highlight our commitment to preventative healthcare, with the objective of living healthier, for longer.

“With new Randox clinics opened in Belfast and Derry/Londonderry, to complement those in Crumlin and Holywood, our private, comprehensive diagnostic packages are easier to access than ever before.

“We all look forward to a highly successful Randox Antrim Show on Saturday 23rd July – and to making the most of life!”

This year, Antrim and Newtownabbey Borough Council has awarded invaluable funding to the show in addition to supporting the provision of the Show’s Launch. In support of the event, the Deputy Mayor of Antrim and Newtownabbey. Leah Smyth, said: “I am delighted to see the Randox Antrim Show back this year in the beautiful grounds of Shane’s Castle.

“The line-up this year sees new competitions, awards and events and it’s great to see the popular traditional family favourites making a return after a two-year absence.

“This event brings thousands of visitors into our Borough which is great for local businesses and is a wonderful opportunity to showcase everything Antrim and Newtownabbey Borough has to offer to our residents and visitors. It really is a great day out for all the family.”

Meanwhile, William Adair (23), from Dunadry, was revealed as being the most recent person to join the ranks of Life Membership, meaning he can now enjoy complimentary entry to the show each year for life.

The YFC County Games Competitions Day will also be held at Antrim with Tug-of-war, Tractor Handling, Gator Challenge and Slippery Football, to name a few to allude to the spectacle of games they put on.

Young Farmers’ Clubs members who are 18+ years can enter the event for the reduced fee of £5 on production of a valid YFCU membership card at the entrance gate.

From creative crafts to calorific cakes, there will be lots of non-farm animal activities that will have wide appeal to attract spectators from both farming and non-farming communities to take a stroll through country life.

Other popular activities open to anyone to enter include the Children’s Pet Show, kids’ Treasure Hunt, and the varied displays of floral art, photography, jams, eggs, baking, fruit, vegetables, handicraft, horticulture, and baking, as well as arts and crafts projects from Primary Schools and Young Farmers’ Clubs.

There will also be many trade stands and stalls to browse and a range of family attractions and side shows to keep kids of all ages amused.

A copy of the Show Schedule is available from the Show Secretary or can be downloaded from www.randoxantimshow.com.

The action takes place on Saturday July 23 from 9am to 5pm. Admission to Randox Antrim Show is £12.50 per Adult, £5 per Young Person (12-17 years) and for 18+ YFC Members (on production of a valid YFCU membership card), and Under 12s go FREE and must be accompanied by a paying adult. Car parking is also FREE.