The Antrim heroes who 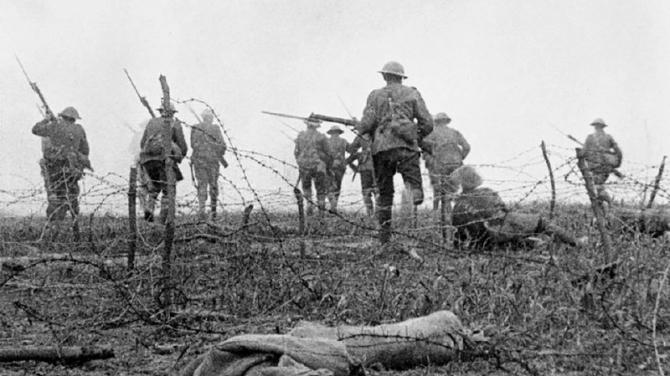 “WE’D been drumming up a cup of tea and Gerry spotted us and sent over a 5.9 and blew the machine gun up - our Lewis gun was totally beyond repair,” recalled Hugh Stewart, a machine gunner with the 11th (South Antrim) Battalion of the 36th Ulster Division.

“I got up after the explosion and I wondered why the ground was all springy underfoot – it was my mate, and he was lying there dead under the rubble and dust. He’d been alive a few minutes ago. Now I was standing on him.”

It was the morning of July 1st, 1916, ‘as fair a morning as ever graced God’s earth’ as one Ulster Division soldier described it, and the frontline trenches, packed with the assault troops comprising the first waves, were alive with nervous energy.

The Somme Offensive - the ‘Big Push’ so long awaited to break the deadly deadlock on the Western Front – was about to begin.

At 7.30am, the pre-emptive artillery barrage on the German positions would lift, and the men would surge forward to attack the enemy trenches. It was, in the words of R.H Stewart, ‘like waiting for someone to die. You know it’s coming, and you wish to God it was over and done with’.

Pensive Allied troops across the line had been reassured that the enemy’s barbed wire obstacles would be cut and their trenches obliterated, and that the objectives ahead could be gained by simply walking across ‘No Man’s Land’ at a steady pace behind the creeping barrage to occupy what were hoped to be abandoned German trenches.

However, at Thiepval Wood, where the troops of the Ulster Division were stationed, it was already clear that the German defences were all but intact. The South Antrim’s war diary, written by Lt Colonel Hercules Pakenham, recorded that, 15 minutes before the attack was even due to start, there were already heavy casualties inflicted by a furious German counter-bombardment.

“There was very heavy shelling,” he writes, “one platoon each of B and D companies were practically annihilated. Four men only of B platoon and three in D company.”

It was, to quote local historian Alvin McCaig, a ‘disturbing portent for the day ahead’ – a day that would live on in infamy as the bloodiest in British military history.

The critical moment at hand had been months in the making. The hideous clash of empires already known as the ‘Great War’ was well into its second year by the time the Somme Offensive began. Millions had already died on Europe’s battlefields and beyond.

As has been well recorded, the conflict was one of contradiction and transition, a gruesome hybrid of tradition and modernity. Old military doctrine - that of dashing cavalry charges and packed formations of marching men advancing with fixed bayonets - was shot to pieces when fielded against new innovations like the machine gun, quick firing artillery and barbed wire.

The resultant bloodshed was predictably appalling, and, accordingly, the mobile ‘war of movement’ had bogged down into static trench warfare by the end of 1914. It was a stalemate that would remain unbroken until 1918, with neither side able to break the other’s defensive lines without suffering grievous casualties.

258 men from Antrim and its immediate environs volunteered for service in the war, of whom 42 would not return.

The Battle of the Somme was a baptism of fire for the vast ‘New Army’ of volunteers recruited at the beginning of the war. Often organised into units comprised of friends and familiars hailing from the towns in which they were formed - the famous ‘Pal’s Battalions’ - the ‘New Army’ was the result of a vast mobilization initiative staged by Lord Kitchener to raise an army of comparable size to the vast conscript armies fielded by Germany and France.

Britain’s small pre-war army had been ground to a cipher in the battles of 1914, and bloody experience in 1915’s Battle of Loos emphasised that quantity had a quality all of its own when it came to the mincing machine of the Western Front.

One such ‘New Army’ formation was the 36th (Ulster) Division under Major General Oliver Nugent.

Formally activated in September 1914, it consisted of pre-war members of the Ulster Volunteer Force bolstered by younger men who enlisted at the onset of the conflict.

Arduous drilling preceded the division’s deployment overseas, with some formations, such as the 109th Brigade, undergoing training at Shane’s Castle.

As Phillip Orr writes, when Lord Kitchener inspected the troops of the division in July 1915, he remarked to Sir Edward Carson that the 36th was ‘the finest division of his New Army that he had yet seen’.

Many local men were among the division’s ranks when it arrived in France in October 1915, particularly within the 108th Brigade’s 11th (South Antrim) Battalion. Even the MP for South Antrim, Curtis Craig, brother of Unionist leader James Craig, served in the battalion as a captain.

Whilst a decisive blow on the Somme front had been decided upon at the Allied Chantilly Conference of 1915, early plans were drastically altered when the Germans staged their own enormous surprise attack with the intent of “bleeding the French army white” at Verdun in February 1916.

The huge French army, made up of seasoned veterans of two years’ worth of trench warfare, was supposed to have taken on the main burden of the upcoming Somme offensive. Instead, they were forced to stand fast at Verdun, leaving the primary responsibility of the Battle of the Somme to the forces of the British New Army.

Many believed that the deployment of the New Army was premature and the attack at hand too pivotal to be entrusted to inexperienced troops, but the Allies had no other choice but to commit them to battle.

As the great offensive scheduled for the summer of 1916 loomed, the 36th familiarised itself with trench warfare and rehearsed attacking elaborate models of German fortifications behind the lines. The preparatory work in advance of the battle was also not without danger, with the Germans opposite well aware that an attack on their sector was imminent. Locally recruited riflemen Arthur Bell, Alexander Galloway and James Kyles were among those killed before the official beginning of the battle whilst holding the line in Thiepval Wood in June 1916 as the Germans responded to the thundering Allied artillery with deadly salvos of their own.

The opening of the attack, fixed for 7:30am on the morning of July 1st, 1916, would involve the deployment of the 36th Ulster Division in the first wave, attacking a key location between the River Ancre and the town of Thiepval known as the Schwaben Redoubt.

The redoubt was one of the most formidable strongpoints along the entire German line, a veritable fortress of trenches brimming with interlocking machine guns, bristling with barbed wire and dotted with bomb-proof concrete dugouts up to forty feet underground.

In the preliminary week-long artillery bombardment that preceded the offensive, British guns lobbed some 1.5 million shells - more than they had fired in the entire first year of the war - at the German lines.

As the shelling reached a crescendo on the morning of July 1st - with the guns even audible on London’s Hampstead Heath - the men of the 36th Division moved forward to their jump-off trenches in the denuded Thiepval Wood.

Some observed that the battle would coincide with the anniversary of the Battle of the Boyne, and at least one man, Sergeant Samuel Kelly, opted to wear his Ulster sash over his khaki uniform.