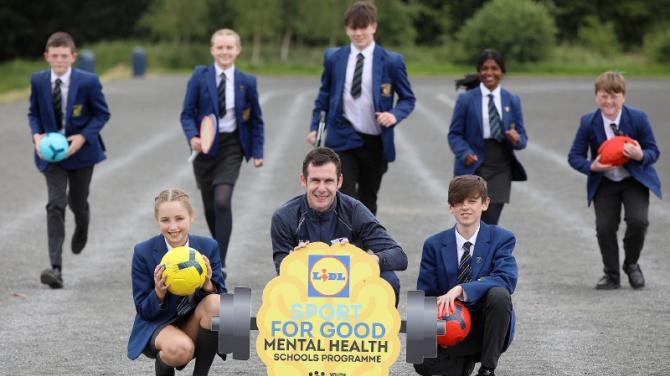 With 45 per cent of young people in Northern Ireland stating that their mental health has been impacted by the Covid-19 pandemic, the Lidl Northern Ireland Sport for Good initiative is focused on providing students with the correct tools to increase confidence and resilience, by seeking the long-term physical and mental health benefits of participating in sport.

From local sporting heroes to Olympians, the workshops are being led by an inspirational line up of athletes at the top of their game who have been specially trained by Youth Sport Trust to lead sessions and help students manage their mental health through sport as they progress into adulthood.

The local man got involved in athletics at the tender age of 10 and, by the time he turned 18, was competing in the largest Paralympic sporting event in history, the Paralympic Games, in Beijing, China. Now recognised as one of the most successful Paralympic athletes of all time, he is passing on his wealth of knowledge to pupils across the country as part of Lidl Northern Ireland’s flagship Community Works initiative, Sport for Good.

Commenting on the workshops, Michael McKillop said: “This is an exciting opportunity for me to be part of the Lidl Northern Ireland Sport for Good programme, as it is something I can really identify with.

“As someone who struggled with mental health problems throughout my sporting career, I hope to inspire the pupils to embrace the benefits of sport in improving mental health, but also building resilience and confidence to live life to their full potential.

“Growing up with a disability, I didn’t let it limit my sporting ambitions. I’ve failed over and over again in my life and it only motivates me more to succeed. This is the message that I would like the pupils to take away from these workshops.“

Established in 2019, Lidl Northern Ireland’s Sport for Good initiative has supported more than 80 schools and sports clubs, providing over £220,000 in funding to encourage more young people into sport.

Earlier this year, the retailer announced 25 winning schools - hailing from every county across the region – who were selected for the Mental Health Athlete Mentorship programme thanks to nominations by local shoppers, following a call out for competition entries in October last year. Each winning school also received £1,000 worth of brand-new sports equipment.

Mrs. Lendrum, Principal of Antrim Grammar, said: “Tackling mental health and breaking the stigma around this taboo subject is a key focus for the staff at Antrim Grammar.

“We strive to educate our pupils on managing their emotions, especially during stressful periods of the school year and providing mental health services that are easily accessible.

“It was an absolute delight to welcome Michael to the school and to hear of his inspiring journey of living with cerebral palsy to fulfilling his dream of becoming a Paralympic athlete.

“Michael’s story, resilience and ambition really connected with a lot of our pupils on a personal level.

“The staff and pupils at Antrim Grammar would like to express our thanks to the parents and local Lidl shoppers who voted for us. I would also like to thank Michael McKillop, Lidl Northern Ireland and Youth Sport Trust for delivering these vital workshops to help support our pupils with skills for life.”

Louise Gray, Development Manager at Youth Sport Trust explains: “Things have become critical when it comes to the health and happiness of young people.

“We are staring in the face of ‘the next pandemic’.

“The value of sport and the Lidl Northern Ireland Sport for Good programme are so important in helping to address these challenges, and making sure all young people are physically and mentally prepared to take their place in today’s society.