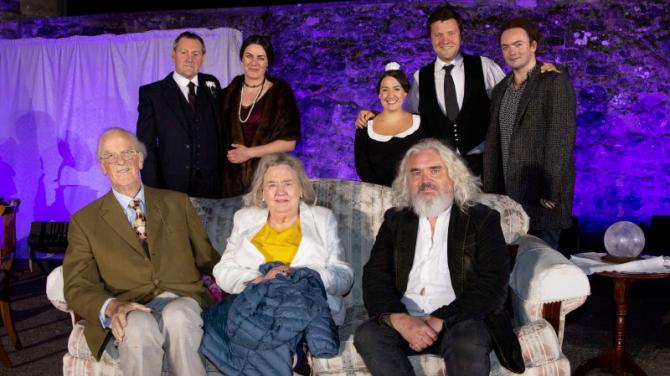 JUST under year after it debuted in the shadow of Antrim Castle, Michael Cameron’s play ‘Carson and the Lady’ is to go on tour.

The play is set in the stately home of Lord and Lady Massereene in Antrim Castle Gardens in the years prior to and beyond the creation of Northern Ireland in May 1921.

The play follows the story of these historical characters as their lives and fortunes intertwine against the backdrop of some of the most remarkable political developments in a momentous and turbulent period of Irish history.

Written by local man Michael Cameron, who penned the award-winning play ‘Ruby!’, ‘Carson and the Lady’ is inspired by the writing of historical biographer Lyndsy Spence, directed by Colm G Doran and features an acclaimed Northern Ireland cast.

When the play was first performed it was communicated that it was one of a number of events that received funding support from the NI Office and the National Lottery Heritage Fund as part of the ‘Our Story in the Making: NI Beyond 100’ programme.

It is understood that events that received support had to take place before 31 March 2022.

It was first performed as part of Antrim and Newtownabbey Borough Council’s NI100 ‘One Giant Weekend.

Now it is set to appear at Belfast’s prestigious Lyric Theatre and at the Open House Festival at Bangor Castle this August and September.

Despite ‘moving house’ from its original setting a member of Antrim and Newtownabbey Borough Council’s Arts and Cultural Advisory Panel has said that there will be a boon for the area.

The Lyric Theatre has now announced that the play will be staged from 3 to 7 August in Belfast.

The production will also be staged at the Open House Festival in Bangor on 24 August with plans for additional performances in Dublin suggested at a later date.

The Antrim Guardian understands that Council retain the rights to present the play within the Borough but also across Northern Ireland - an endeavour taking place under the umbrella of a ‘Theatre at the Mill Production’.

However at Antrim Town’s Old Courthouse theatre, which was recently renovated, appears to be staging only one event, a music promotion, according to the event listings for the venue in the upcoming period from August until the end of 2022.

There have also been criticisms that there are no council staff on site to answer questions or operate the box office service.

While it was well-received last year, the wider appeal of such an Antrim-based play is not yet known, supporters of the touring version of the play say that it may encourage tourists to visit the area.

A review in the British Theatre Guide last autumn cited shortcomings, stating that the play was ‘hindered by Cameron’s uncertain way with historical facts’.

Some onlookers have also noticed that information published online to promote the play in both Belfast and Bangor misspells the name ‘Massereene’.

There is currently limited information in the public domain on how arrangements to tour the play have been agreed and progressed.

Minutes of meetings provide some vague insights, notably the role of the Borough Arts and Cultural Advisory Panel.

The playwright Michael Cameron is one of the voluntary members of the panel and we understand that he has briefed panel members on progress on a number of occasions.

Speaking this week to the Antrim Guardian, Councillor Jim Montgomery who sits on the Borough Arts and Cultural Advisory Panel said that while he could not discuss the financial details of the touring production, he said that the committee ‘had necessary details to make an informed decision’.

“This tour is an excellent idea in promoting the arts and culture being produced in the borough.” he said.

“Michael Cameron wrote an excellent play which details well the history of an event within Antrim and it was a success in the centenary.

“It is right that we promote our history and culture in other areas outside of the borough and also let a wider area of people experience such a good production.”

Mr Montgomery said that costs will not only be covered by ticket sales, but could well lead to the council making a profit

He added that it was it made clear to members of the panel how the touring production was being resourced in terms of staff time and that he was comfortable with the arrangements, adding: “The use of our resources outside of the borough is very limited and only for the purposes of promoting the benefits of the council.”

Mr Montgomery, who is a big theatre fan and frequently travels to the West End in London to see musicals, said that despite limited activity and lack of staff presence at the Old Courthouse, things could soon change.

“Antrim is not losing out because of resources being used outside the borough,” he said.

“The council is reinventing and generating its arts and culture programming after Covid.

“A new head of Arts and Culture has been appointed and has exciting new ideas for programming for all our theatres.

“ I met a few months ago with officers and was pushing for greater and more diverse use of our theatres especially the Old Courthouse, putting on established productions and being a place to try new types of productions.”

Mr Montgomery said that he is happy with the level of coverage council is receiving in the literature and publicity for the play, adding: “Where we feel we should be getting more coverage we are pushing for that.”