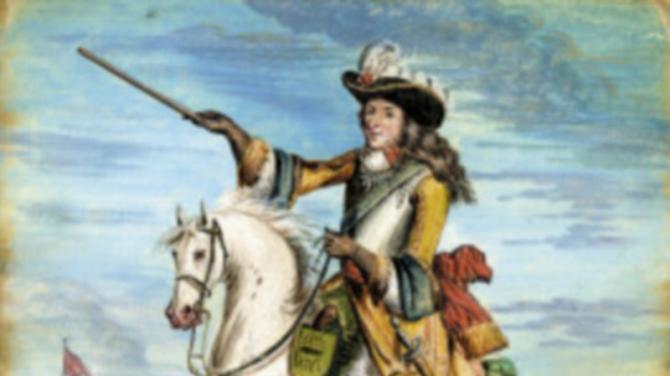 TRUTH really can be stranger than fiction.

A stroll through the Antrim archives unearths many a golden nugget of news that prove conclusively that things are often not as they seem.

Take, for example, the elderly gent who claimed to have clamped eyes on none other than King Billy...

The year was 1955 and thousands of pairs of marching feet were battering the streets of Antrim as the Glorious Twelfth returned to town.

And joining them was an 80-year-old man from Carrickfergus.

Though not a member of the Orange Order, he stood for its principles. and for more than 60 years he had accompanied the local Lodges to the Field.

And 67-years-ago he was up early, dressed in his Sunday best with an Orange lily in his button hole.

He travelled alone on the train to Antrim and on arrival he searched for the best vantage point to get an uninterrupted view of the procession.

Finally he spotted a six-foot garden seat within a stone’s throw of the hospital, and there planted himself to await the march past.

Presently two aged locals came along, and shared the seat without even bidding the stranger the time of day, or passing a remark about the blistering weather.

Minutes later came the first bands hoved into view, and the trio watched the banners passing by with keen interest and admiration without making any comment.

Eventually the skirl of bagpipes was heard, and as the accompanying Lodge drew near, it was observed that the banner glistening in the sun depicted the historic landing of King Wjlliam at Carrickfergus in 1690.

Thankfully, a reporter was on standby to hear what happened next.

For a moment the silence was broken, one old fellow remarking to his pal: “Say, boy, that Lodge is from Carrick.”

“Aye.” replied his companion. “That’s the place where King Billy landed.” he repeated.”

Proud at hearing his home town mentioned, the visitor chuckled.

“Beg pardon.” replied one old fellow, holding his hand to his ear to catch the words.

The two Antrim men looked at each other in amazement. Then one nudging the other away, said in a stage whisper: ‘It’s time we’re out of this.”

They disappeared, no doubt thinking the stranger had ventured out of the nearby hospital.

Clearly baffled at the sudden departure of the local lads, he sought reassurance from the reporter hovering nearby.

And then the moment of clarity. Of course he had not been on the scene in 1690 - he was merely referring to King William landing the Orange pageant in Carrickfergus!

A misunderstanding, but one can only imagine some of the banter in the bars of Antrim that night when the conversation turnd to the VIP in their midst that day.

There are occasions, however, when local people have played fast and loose with the truth.

The witch and the magic mirror

This second tale dates back to 1916 and it centres on PJ McCorry, a farmer who lived alone on the outskirts of Crumlin.

One day when he was out working his land, an enterprising thief decided to harvest some of the local man’s hard earned cash. He broke in and left with £50 - that’s a couple of grand in today’s money.

The police were duly called and they ‘proceeded without delay to make investigations, but were unable to find the slightest clue that would lead the detection of the perpetrator of the theft’.

But PJ was not going to take the hit without a fight.

The following day, accompanied by his brother, he travelled to Belfast for a special meeting. The twist is that it was with a witch.

During the consultation the witch produced a mirror and told the McCorry boys that if they peeked into it they would see the reflection of the guilty party gazing back.

If they made it known on their return home that they had glimpsed the house breaker, the cash would soon be safely returned.

The following day John Rea was opening the post office when he spotted a small parcel on the window ledge. It was addressed to PJ McCorry.

It was duly delivered and found to contain £45 10 shillings.

Better than nothing, but the Crumlin man understandably wanted all his money back.

As the brothers M'Corry were not seen in the neighbourhood until Saturday evening, another story originated ‘from somewhere’ that they had made another visit to the Belfast witch, and that she informed them the rest of the loot would be safely home soon - or the name of the robber would be passed onto the police.

Alas, it is not known if the money ever materialised, but either way the McCorry boys undoubtedly dined out on their story of their dabble in the dark arts for many years to come...

Other stories are downright strange for other reasons, like this second tale of the ‘supernatural’.

Away with the fairies

Dabbling in the dark arts can put a strain on any friendship.

Back in 1911 Henry Hunter was dusting himself down to attend the Palm Sunday service at his church.

He was running a little late, so the church was full when he arrived and made his way to his traditional pew.

He saw Thomas Cushinan had taken a seat directly behind him. They had known each other for years so he thought little of it.

Until, that it, when he walked passed him and heard the unmistakable sound of him clearing his throat - followed by the unpleasant slap of sputum on his trouser leg.

Perhaps Mr Cushinan was unwell. Maybe he did not realise he was walking past at just that moment. Better gave him the benefit of the doubt.

But later, during prayers, he heard his ‘friend’ clear his throat once more - followed by the sensation of saliva running down the back of his neck.

What was going on?

All became clear at the end of the service when Mr Cushinan confronted him head on - delivering another revolting mouthful of phlegm onto his face.

There was no shortage of witnesses, so the police were called to resolve the mystery dispute.

So why had the local man acted in such an irrational way?

Well, it transpired that he had concluded that his target was practicing witchcraft.

He was not guilty on both counts, but the same could not be said of his assailant.

He was later bound over to keep the peace - and advised to carry a handkerchief in future...