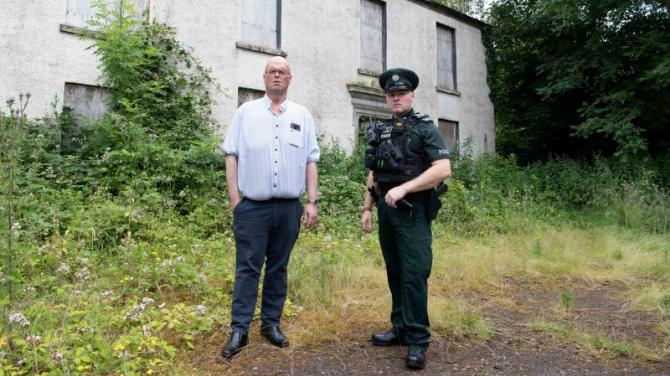 THE PSNI has vowed to take action after Riverside residents complained about teenagers congregating at a derelict building at number 51b.

Originally a grand house dating from the early 1800s, with links to the Paper Mill industry, the house formerly known as ‘The Cedars’ lies within Antrim Conservation Area.

The property is already facing demolition after a developer lodged plans to build houses and apartments at the site.

In recent weeks, large groups of teenagers have been seen entering and exiting the site and parties have been getting rowdier by the day, according to people who live nearby.

And it is believed that at least some parents are dropping off and collecting their kids from the site, which is owned by Gribben Homes.

It was previously occupied by the Barneses, Mixes and Bailies over the years and lately the Whiteside family.

One resident told the Antrim Guardian: “We don’t think these are bad kids but there are minor incidents which are accumulating, including noise, littering, knocking on doors and windows and we are worried that things are going to escalate if action is not taken.

“Generally when challenged, they are quite apologetic, but others have given local people quite a lot of cheek.

“We also worry that the teenagers themselves will get injured, as the house must be in a pretty bad state of repair by now.

“We would ask that parents know where their kids are and maybe take a bit more responsibility.

“It is certainly apparent that some parents are bringing their kids here and picking them up - this is completely unfair on residents, expecting them to deal with anti-social behaviour from other peoples’ kids from outside the area.

“What is also unfair is that someone can buy a property and let it go to wrack and ruin while a planning decision is made.

“If the property was properly secured and if the bushes were cut back to make the whole site more visible, it is unlikely that we would be experiencing these problems.

“So the developer needs to step up and take some responsibility.

“This is going to take a collective effort from residents, parents, councillors and the police.

“These kids need something better to do with their time - somewhere else.”

Over the weekend, someone has also dumped a large amount of building waste at the entrance to the property.

“Riverside has been of particular concern for local residents but let us reassure you that we are listening.” said a spokesman.

“We will continue to show a visible presence and engage with our partners to resolve this problem for the long term.” said Sergeant Tate.

Councillor Montgomery added: “There is clearly a need for the owners of this property to secure the whole site effectively - and soon.

“Whilst the house may be secure it is other parts of the property being used.

“I know there is a planning application lodged which needs to be dealt with realistically and accommodating residents concerns so that this area can be sorted.”

In late 2021, the Antrim Guardian revealed the plans for 20 homes on the currently derelict site of 51b Riverside, Antrim.

This newspaper reported on how parking is already at a premium on Riverside, with many people having to leave their cars hundreds of metres from their own properties and vehicles crowding access to and from homes on the narrow street, hampering deliveries and emergency services vehicles.

And there is no footpath for pedestrians.

Gribbin Homes is based at Moneynick Road in Randalstown and is understood to have purchased and developed other lands in the Riverside area in the past.

The new proposals have reduced the number of properties down to 14 - seven apartments and seven townhouses.

South Antrim MLA Trevor Clarke has rowed in behind the residents after attending a series of meetings to hear their concerns. And Mr Clarke said that the revised proposals still contain far too many properties.