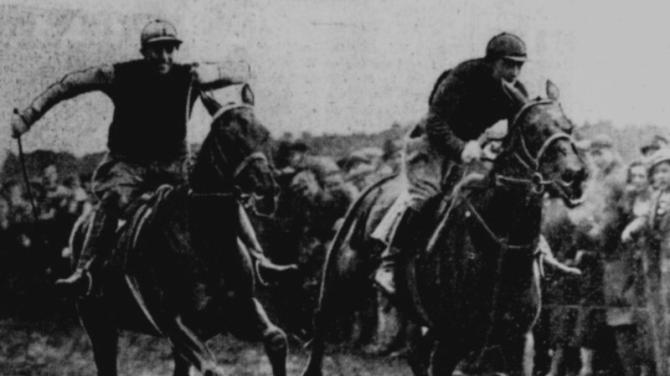 THE place once known as Oriel Lodge eventually became home to the behemoth that was the British Enkalon factory, but before that, it was more famous for being a sprawling farm estate and home to the Antrim Races.

This week the Antrim Guardian took a gallop around the British Newspaper Archive to find out about this once-popular institution.

In 1924, Oriel Lodge was sold by auction on the instructions from the executors of the late WD McManus.

Auctioneers RJ Craig and Son of Antrim described Oriel Lodge as ‘a delightful property situated one half-mile distant from the town of Antrim, where one of the best monthly cattle markets in Northern Ireland is held, and from whence there are railway connections with all parts of Ireland.

“Motor buses to and from Belfast (a distance of 171 miles) per the gate hourly.

“The lands lie in a compact square, bounded on two sides by county roads, and intersected and surrounded by three streams of excellent water.

“The soil is of rich, deep, loamy character, well known for its superior grazing and fattening qualities. and is all in old pasture.

“A broad, well-made farm road leads through the lands, giving easy access to each field.

“Standing in a beautiful position. convenient to the town of Antrim, surrounded by fine old timber - limes and copper beech - and approached by a broad avenue from the main road, is the magnificent residence known as Oriel Lodge, a substantial modern building, well equipped in every respect, fitted with all present-day requirements, including electric bells, and containing a specious hall, smokeroom, three reception rooms, breakfast room, six bedrooms, cloakroom, bathroom (hot and cold water), WC, Mistress’s Kitchen, pantries, and storerooms ; also a servants’ apartments (with separate stair), including kitchen, bedrooms. laundry and harness room.

“The woodwork throughout the lieu's is largely pitch pine, oak and mahogany.

“The out-buildings are extensive and substantial, forming outer and inner yards.

“They comprise byres for 20 cows with troughs and racks, and passages in front.

“There are three large cattle sheds erected in convenient positions on the lands.

“There are also two cottages, two-storey and slated.

“The Purchaser will be required to take the Threshing and Churning Machinery at the Auctioneers Valuation.

“The property is situated in one of the most picturesque, convenient, and peaceful parts of Ireland and is admirably circumstanced as to social surrounding educational facilities and outdoor recreation - the far-famed Antrim Golf Links, beautifully situated on the banks of Lough Neagh within a few minutes’ walk; ample facilities for boating and fishing, and two packs of hounds meet weekly during the hunting season in the immediate neighbourhood.

“For a number of years the famous Killultagh Horse Races have been held upon these lands.”

The previous occupant was the late Alexander Woods, with the house and all contents auctioned in 1863.

He had been deputy vice-chair of the board of the Antrim Union.

The gentleman’s residence and 225 were for sale again in 1943, this time by William McManus.

By this time, part of the lands were leased to the War Department.

The house and lands passed into the hands of the Hurrell family, but by 1961, it was sold again, this time to British Enkalon.

A report from the time breathlessly told how, two weeks after completing a £46,000 land deal, 30-year old farmer, Stephen Hurrell said he ‘felt like paying £50,000 to have his farm back’.

“On it is to rise a £12 million nylon factory.” said the newspaper.

“Mr Hurrell has sold to an English subsidiary of a Dutch concern, but has had second thoughts.

“He dislikes people slapping him on the back and saying: “You are a rich man now Steve. You have nothing to worry about.”

“He says he thinks he can never get another farm in Northern Ireland just like the farm he has sold.

“At first, he said, he was told the Ministry of Commerce wanted only part of the land and that the Hurrell family were to be allowed to remain in their home, and retain a cottage in which Stephen could accommodate his father, mother and sister.

“Now we are being told that we are to get out - lock, stock and barrel,” Stephen said.

Mr Hurrell said he would like to remain a farmer, and had looked forward to building up the finest dairy herd in Northern Ireland.

He was puzzled, he said, why no move had been made to take over adjoining lands, where only a small acreage was in use for farming, and which had equally good water facilities.

“I am a worried man over all this.

“It is a rough deal and I wish it had never happened,” he added.

Meanwhile, the Killultagh Hunt dates back to 1610, originally a stag hunt, with scarlet livery. In 1832 Killultagh joined with the Old Rock harriers, whose livery was a dark bottle green.

A short time later they amalgamated with the Earl of Chichester’s private pack, whose livery was old gold.

They then became known as the Killultagh, Old Rock and Chichester Harriers.

In the late 80s the hunt changed from a harrier pack to a fox hound pack.

The Killultagh Hunt has been running Point-to-Point races since the late 1800s.

The race was held near the old Enkalon site, in Antrim known as ‘The Bog Meadows’.

In the 50s and 60s they located to Pigeon Town, Glenavy. It eventually moved to Ballyarnot, Aldergrove, then to Lennymore in Crumlin. The present meeting is held on the Largy Road, by kind permission of Dr Peter Fitzgerald and Randox Laboratories.

Back in the day, the Antrim Races was one of THE places to be, with buses arriving from all over Northern Ireland.

In 1919, one report detailed: “A card of five events comprised the programme of the point-to-point steeplechases brought off at Oriel Lodge, Antrim, promoted by the Killultagh and Old Rock and Chichester Harriers’ Hunt Club.

“In pre-war days, this annual fixture was one of the principal features of the northern programme, and always attracted large crowds of sportsmen and of the general public.

“Amongst others who took a prominent part in today’s proceedings were Viscount Massereene and Ferrard, who acted in the capacity of starter.

“Donors of cups were Sir Thomas Dixon, Captain A. N. V. Hill-Lowe. The race confined to officers of the North Irish Horse was without doubt the most sporting item on the programme.

“A lot of interest centred in the concluding race, for military riders, each of the eight being owner-ridden. Sloper and Nora Crean were joint favourites and the first-named scored a popular win for Lieutenant W. E. Jones.”

A Victory Cup presented by Capt. A. N. V. Hill-Lowe was awarded to horses ridden by officers of the North Irish Horse during the past season, who were in service with the regiment.

A 1923 report said: “From every point of view, the point to point steeplechases in connection with the Killultagh and Old Rock and Chichester Harriers’ Hunt Club which were run Oriel Lodge, Antrim, Saturday, were most successful.

“This Hunt, one of the oldest in Ireland, having been established in 1816, is also one of the most progressive, and the point-to-point meetings are a recognised event not only the life of the hunting fraternity, but with the general public.

“The arrangements are always perfect, and that condition of affairs is due the Master, Mr. P. Meenan, J.P., who spares neither time nor energy in his efforts to cater for the comfort and pleasure of all.

“A good course, good horses, and plenty of them, and magnificent sporting crowd, were the features of Saturday’s reunion, the last of its kind this season.

“Many made the journey by rail from Belfast, but the contingent that arrived by road beat all records for this meeting. With the crowds came the usual undesirables, pick-pockets, welshers, etc, but it is gratifying to record that few cases of the former were reported, while only two “gentlemen after laying the odds” in the first two races vanished.

“Although cold, the weather after racing commenced was very good, and the events, all interesting, were carried out under favourable conditions.”

In 1924, the writer told how: “Antrim races, which were postponed a fortnight ago on account of the inclement weather, were held at Oriel Lodge, Antrim, last Saturday afternoon.

“The fixture, which is the last point-to-point engagement of the season, ranks high in the estimation of the sport-loving people of Ulster. Indeed, it is one of the most popular of the series.

“Today’s attendance was particularly large, the pleasant weather of the forenoon and the prospect of a capital day’s sport uniting in forming a well-nigh irresistible inducement to get to Antrim, at all costs, by road or by rail.

“There were five events on the card, for each of which there was a satisfactory entry.

“The arrangements were carried out to the entire satisfaction of all concerned under the stewardship of Mr. Patrick Meenan, master of the Killultagh and Old Rock and Chichester Harriers, who were responsible for the promotion of the meeting. Mr. R. J. Kirk, J.P., discharged the duties of clerk of scales, the judge being Sir Thomas Dixon, Bart D.L

“The cups for the various events were subsequently handed to the winners by Lady Craig. The weather held gloriously fine, but the going was heavy a result of recent rains.”