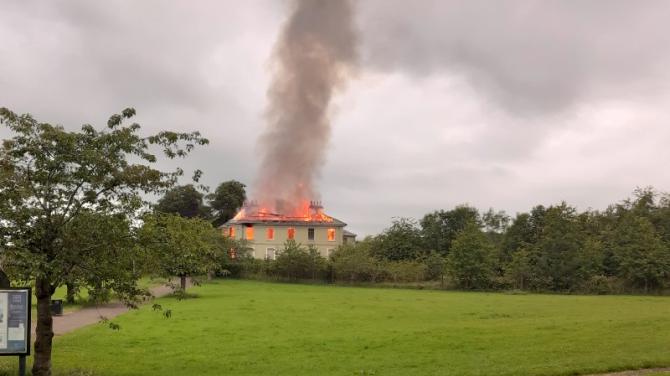 IT’S official: the money is in the bank and work will soon begin to lovingly restore the council’s former HQ to its former glory.

Once the location of a former medieval monastery, Steeple House was built in 1827 by the Fawcett family and later became the nerve centre of Antrim Rural Council in 1956.

A malicious blaze in July 2019 caused extensive damage to the building including the loss of its roof. Many feared that its days were numbered.

But last summer the Antrim Guardian exclusively revealed that it would indeed rise from the ashes. And, better still, controversial proposals to build housing in the shadow of the tower had been axed.

What could have been the last act is instead just another chapter in the colourful story of a much-loved local landmark.

And thank goodness for that.

The Grade B+ listed building is to be sensitively repaired, and will eventually house the Mayor’s Parlour - and much more besides, including space for community meetings and special events.

Council sources have indicated that works are scheduled to begin soon. Before long, they say, the ugly fencing will be removed and the Steeple will be reunited with its 17 acres of parkland.

The grounds and the round tower are also set to be spruced up in a project expected to cost ‘somewhere in the region of £10 million’.

Serious money, but then this is a very serious attempt to secure the future of one of the jewels in Antrim’s crown.

Most will welcome the investment, but a trawl through the archives has revealed that some managed to bag themselves a bigger bargain in years gone by!

Who knew that an Antrim family once acquired the mansion for the princely sum of absolutely nothing?

Rather than legal tender, all they needed was a stroke of luck and the original owner’s eccentricity.

Each New Year’s Day Mr Shaw, the man with the deeds to the property, had a rather unusual habit.

‘Googly’ Shaw, as he was known, appointed a new agent on January 1, leaving his grand home to them in his will.

But come December 31 they were dismissed and another hopeful was put in post.

It was a lottery - and eventually it would pay off handsomely.

Eventually, Shaw brought into service local man, George Clark, and three months later The Steeple was his, for in March Shaw died.

In the years that followed, the house changed hands a number of times eventually becoming the home of Samuel Fawcett JP, who sat on the Rural Council.

But in early 1956 the removal vans returned. The house was to be put on the market - and everyone agreed that there would be no shortage of takers for Antrim’s most affluent addresses.

Which put the council in a bit of a quandary. They were then based in rooms near the Massereene Hospital, and they were desperate to spread their wings.

The Steeple would fit the bill perfectly. The fact that it housed the round tower, ‘the unofficial coat-of-arms of the council and the town’, only sweetened the deal.

Indeed, the tower featured on the council’s headed paper. It was if the revered clerk, the late James L Clark, had an inkling of what was to come...

But they had to move fast.

William Clark was the prime mover of the bid, and he had the onerous responsibility of keeping the council abreast of developments - and ahead of the game.

He confirmed that the committee had spent some ‘anxious moments’. Could they get it bought in time, and would the Council as a whole approve of what they had done?

The Council's solicitor, L Jackson Holmes, said some indication of the speed they had to move to secure the property was underlined by the fact the whole proceedings had been completed within a mere forty-eight hours.

Had they missed the opportunity he was ‘sure they would all have regretted it’.

The deal was eventually done, with the sale agreed at £20,000. That may be a reasonably priced family car nowadays, but it is the equivalent of over half a million in modern money.

A tidy sum, but as deals go this was quite a good one. For along with the house itself, they also acquired rather a lot of land - much more than the current Steeple Park.

“On the face of it £20,000 might seem a lot money, but when they had disposed of the land they did not need - the property contained some 150 acres - the Council would not have been out very much,” noted a reporter in January of that year.

“In fact, they would have made an extra-good bargain.

“The committee had also done a wise thing in buying the fitted carpets in each of the rooms. It would have taken a tremendous amount of money to carpet the rooms at today’s prices.”

When a group of invited VIPs gathered 66-years-ago to toast their good fortune, there quite a few relieved faces.

Present were the eight members of the sub-committee who had cobbled together the council’s bid, local reps, officials and invited guests.

William Burrowes welcomed them to the Steeple and said it was one of the ‘happiest nights’ of his life.

He said that it was a particular honour given the buildings long and happy history.

Mr Shaw had hosted lavish parties there eight decades previously. The fact that he had a solid silver dinner service large enough to accommodate 80 guests told its own story!

Proposing the toast, Achibald McFarlane said he was confident that former owner Mr Fawcett, who had sadly died, ‘would have been pleased that the Steeple was becoming the headquarters of the Council to which he gave so much of his time and talent’.

He also paid tribute to the members of the Council, of which George Thompson JP, was now the ‘father’, and referred to the ‘harmonious relationships’ which had always permeated their work together.

It would be the same in the future, he was sure.

As for the Council, they had ‘spirit which had no equal anywhere’, and he wished them every success and prosperity in the future.

The guests learned that the dining room, where they ate a lavish meal that night prepared by the chefs at Hall’s Hotel, would be transformed into a council chamber to plans drawn up by architect BT Taggart.

He commended the members on their purchase, noting that if they had not moved swiftly ‘someone else would now be occupying the Steeple’.

They were compliment on making ‘such a fine bargain’. For its size and nature, the condition of the building was ‘unprecedented’.

One of his difficulties, he remarked, was that the Council was a large one. It had twenty eight members, and they were all ‘very active’. Average attendance at meetings was about twenty-six consequently it had taken him some time to work out where they would placed the chamber.

His choice was a good one - and it served the council well for the next half century.

Other guest speakers included Mrs Margaret McGregor, who had the distinction of being the first female member of the Council in its 83-year history. She paid tribute to the efforts of the background team, singling out officers Robert Moore and SM Anketell.

There was a ‘most enjoyable’ programme of entertainment laid on too. Singers Jean Mansell, William Burrowes and Andrew Killen hit the right notes, as didi Louis Williamson with his recitations, with musical accompaniment from Miss Florence Cooke.

All were looking forward to a productive new era in the big house - unaware that they would outgrow it too in just a few short decades.

Thankfully its future is now assured. This local gem is safe - safe as houses.

“I am delighted that the plans approved by the Committee will secure this important part of our local heritage,” he said.

“The plans ensure that Steeple House will be restored to its pre-fire condition, respecting the character, architecture and historic interest of the building.

“The planning proposal also received support and was commended by the Historic Environment Division, the Department responsible for listed buildings in Northern Ireland.”