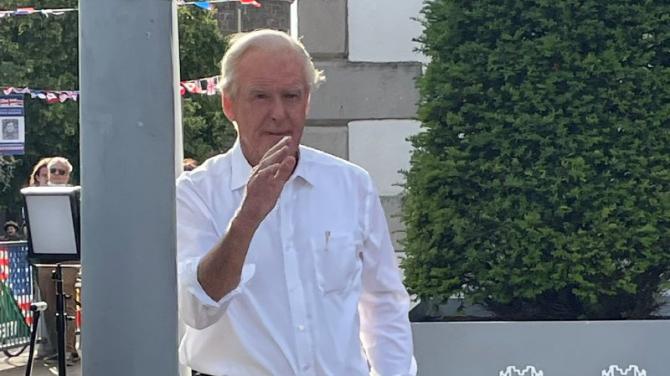 THERE was flurry of activity in Antrim last week as Market Square was transformed into a Normandy town and hosted none other than former Bond star Pierce Brosnan.

In his upcoming film, The Last Rifleman, he’ll play a World War II veteran living in a care home in Northern Ireland who has just lost his wife and plans to visit the 75th anniversary of the D-Day landings.

The Last Rifleman is directed by Belfast native, Terry Loane, who is known for his film Mickybo & Me.

Loane also wrote In The Land of Saints and Sinners, a film starring Liam Neeson, Ciarán Hinds, and Colm Meane which was recently filming in Donegal.

Mr Brosnan, who was heavily made up to look like a man in his 90s, was spotted filming at Antrim Castle Gardens near Clotworthy House and in Market Square, which was transformed into St Mere Eglise, a key location in the D-Day landings.

The town centre was transformed, with DV8, Re:Store and Drop Inn were turned into a souvenir shop, an antiques stall and a Cafe Tabac.

The Old Courthouse even doubled up as an ice-cream parlour.

Barney’s Bar also hosted cast and crew during lunch breaks as a large crew of British and French staff descended on the town.

Local people waited for hours for a glimpse of Mr Brosnan and were not disappointed - after filming stopped, he happily signed autographs and posed for pictures.