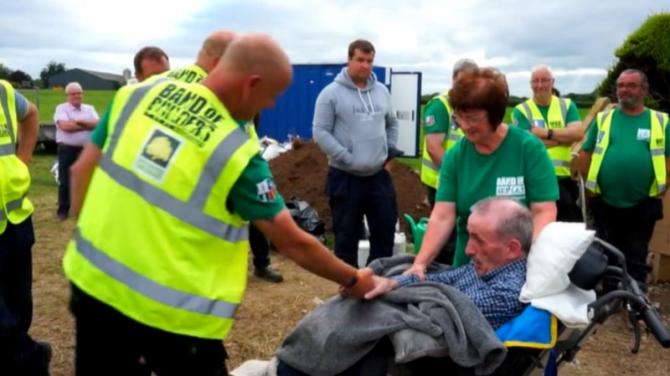 THERE wasn’t a dry eye in the house at the weekend after charity volunteers completed a ‘life-changing’ home extension for a Toomebridge man bed-bound for a decade.

Volunteers from the construction charity Band of Builders (BoB) have been hailed as heroes for building an extension in ten days at the home of a former bricklayer from Toomebridge, who has been living with a rare neurological disorder, which means he requires round-the-clock care.

Margaret McGowan said that the newly built sunroom means her husband Kevin can now look out and enjoy the view of his garden for the first time since he was diagnosed with progressive multifocal leukoencephalopathy (PML) in 2012.

In an emotional thank you in front of nearly 100 BoB volunteers, suppliers of materials, local businesses and well-wishers, Margaret said that the new sunroom will be life-changing for Kevin, a 65-year-old father of six who was initially told his life expectancy could be as little as three months.

“Words can’t explain how grateful we are for what Band of Builders has done –he can not only look out on the garden but can also go outside, thanks to the wheelchair access,” said Margaret.

“This is life-changing and makes a massive difference to his quality of life.”

“As a former builder himself, Kevin said that the quality of the work is first class and the team on site have been brilliant.

“And the finishing touches, such as the new monitoring system and CCTV, mean that I can check on Kevin from anywhere in the house.”

Tradespeople from across Northern Ireland – as well as others who came across from the UK mainland – rallied round to help on the project for Kevin, who has PML: an extremely rare condition that has almost never occurred in a previously healthy individual.

It causes irreversible brain damage and has no successful treatment to date, usually resulting in death within a year of diagnosis.

Although Kevin has limited speech and movement and has to be fed via a tube, he is grateful that he has been able to see his children grow up – including son Cathal, who sent a thank you message to the BoB volunteers from his home in Australia.

The ten-day project was organised by the registered charity, which completes practical projects to help members of the UK construction industry who are battling illness or injury.

This will be Band of Builders’ 26th project since it was founded in 2016 – and the first in Northern Ireland.

Marcus McGee, a Band of Builders Trustee and the Project Lead, said that this is the first project that the charity has undertaken in Northern Ireland and it couldn’t have gone any better, thanks to the great word-of-mouth awareness about Kevin’s plight.

“We had more than 60 volunteers, the vast majority of which were local tradespeople who gave up their holidays to work on this project,” he said.

“Word spread like wildfire on this, and we had so many offers of help from tradespeople, local companies that supplied materials and local businesses that supplied much-needed refreshments throughout and even food for the BBQ that was held to mark the end of the project.

Kevin’s project was boosted by local suppliers and merchants – including one of the charity’s Patron Partners, JP Corry – who gifted materials.

The charity was founded in 2016 when, upon hearing that his friend Keith Ellick was diagnosed with terminal cancer, Lincolnshire landscaper Addam Smith wanted to do something to make his mate’s life a little bit easier.

A plan to landscape his garden won the support of his fellow tradespeople and saw the project grow into a full-scale renovation of Keith’s house, carried out by volunteers from across the country.

Kevin’s project was carried out by volunteers from Band of Builders and, as well as having the support of tradespeople from across the UK, was backed by major names within the construction industry, including DeWALT, Jewson, Gibbs & Dandy, V12 Footwear, Talasey, Resideo and Haemmerlin.

Anyone who is interested is encouraged to find out more about the charity on its Facebook page: www.facebook.com/