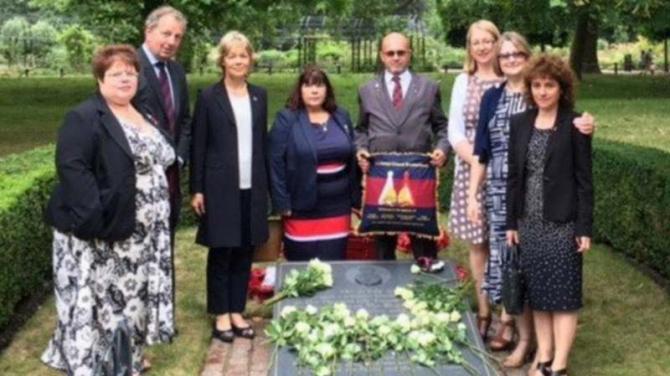 IT is a day that will live on in infamy - another black episode in a period of desperately dark days.

July 20 1982 began like any other for members of the Household Cavalry as they prepared for the daily ritual of the Changing of the Guard in London.

Boots were polished, uniforms immaculately pressed and buckles were gleaming as they mounted their steeds at their headquarters in Knightsbridge for the short trot to Horse Guards Parade.

But this day was different. Eyes were watching the procession as it made its way through Hyde Park - and at 10.43am, with remote control detonator at the ready, the IRA ‘unleashed hell’.

Just as the soldiers passed a blue Morris Marina car at South Carriage Drive a huge blast rang out.

The IRA had planted a bomb in the boot, packed with 25 pounds of gelignite and 30 pounds of nails. It was a device designed to create horrific carnage. And it did.

This week Simon Utley, a survivor of the attack, recalled the moment the bomb exploded.

“I actually thought at the time that someone had hit me on the back of the head. There was a mass vacuum of air just disappearing around you, and then the sharpest explosion in your ear. I could literally feel my eardrum disappearing,” he said.

Three soldiers died instantly in the hail of fire and metal, and a fourth perished three days later.

Seven horses were killed too, and the images of their broken bodies made headlines around the world.

As the emergency services converged on the scene, the countdown had already begun for a second murderous attack across the capital at Regent’s Park.

Musicians from the Royal Green Jackets were performing to a crowd of over 100 people when a device exploded under the bandstand, killing seven of them and wounding dozens more.

Prime Minister Margaret Thatcher, who would survive a bomb attack two years later, insisted there would be no hiding place for the killers.

“These callous and cowardly crimes have been committed by evil, brutal men who know nothing of democracy. We shall not rest until they are brought to justice,” she said.

With hindsight, however, how wrong she was.

And the failure to put the bombers behind bars has been a source of much anguish for the family and friends left behind.

He was serving with the Household Cavalry at the time of the Hyde Park attack, and knew the deceased well.

He was particularly friendly with Lieutenant Anthony Daly. Indeed the Templepatrick man had acted as Best Man at his wedding just four weeks previously - never dreaming that he would soon be organising a funeral for the 23-year-old.

Speaking decades on, it is clear that Mr Kinahan is still coming to terms with the loss of young men in their prime on that summer’s day.

“I had been in the Household Cavalry for about two years then,” he recalled.

“Anthony and I became great friends when we were working together. He then asked me to be his Best Man and through that he became one of my greatest friends.

“He went off on honeymoon and I was off on exercises.”

That all changed on July 20.

“The next thing I knew I was being asked to ring base because something awful had happened.

“We learned that the bomb had happened at Hyde Park and Anthony had been killed.

“It was a horrible shock - ghastly for everyone.”

Graphic images of the devastating aftermath of the Hyde Park blast dominated the front pages for days, with the mutilated bodies of the horses sparking nationwide revulsion.

Indeed, Sefton, one of the animals that survived, went on to become something of a national hero.

But Danny felt that the loss of 11 promising young lives - two of the soldiers lost at Hyde Park were just 19-years-old at the time - was by far the bigger outrage.

“[The coverage] tended to focus on the horses when it should have been focusing on the soldiers,” he said.

“There were also seven Green Jackets killed that day.”

Galvanised by the loss, he joined the long but ultimately fruitless campaign for justice.

In October 1987, 27-year-old Gilbert ‘Danny’ McNamee, from County Armagh, was sentenced at the Old Bailey to 25 years in prison for his role in the Hyde Park bombing and others.

In December 1998, shortly after his release from the Maze prison under the Good Friday Agreement, three Court of Appeal judges quashed his conviction, deeming it ‘unsafe’ because of withheld fingerprint evidence that implicated other bomb-makers.

On 19 May 2013, John Anthony Downey, from County Donegal, was charged with murder in relation to the Hyde Park bomb and intending to cause an explosion likely to endanger life.

The long-awaited trial got underway the following January - and then something rather extraordinary happened.

The trial ultimately collapsed when it emerged that he had received a ‘letter of comfort’ assuring him that he would not face criminal charges over the attack.

Although the assurance was made in error and the police realised the mistake, it was never withdrawn, and the judge ruled that therefore the defendant had been misled and prosecuting him would be an abuse of executive power.

Mr Kinahan was furious that the families had been denied the justice they had waited so long for.

“It’s simply not good enough that the victims of terrorism have to fight every inch of the way for justice against the very legal system that should be helping them find out the truth and punish the guilty,” he said back in 2017.

Undeterred, the families fought on and in December 2019 the High Court ruled that Downey had been an ‘active participant’ in the Hyde Park bombing, and was subject to a claim for damages.

Those damages were set at just shy of £1 million the following year, but it has been reported this week that the families have yet to see a penny of it.

The Northern Ireland Troubles Legacy and Reconciliation Bill has passed through the Commons and it will limit criminal investigations into events in that tumultuous period.

Victims groups are not so sure.

Addressing the Home Affairs Committee last month in his role as Veterans Commissioner, Danny Kinahan agreed that it will be a bitter pill for many.

He said that retired soldiers would ‘begrudgingly’ accept the legislation - and the immunity it offers.

The Bill, he said, had caused ‘huge discomfort’ among veterans but they saw it as an opportunity to ‘close it all down’.

Asked if he had any ‘squeamishness’ about the word amnesty, Mr Kinahan replied ‘yes, plenty’.

The memories of the summer of 1982 have seen to that.