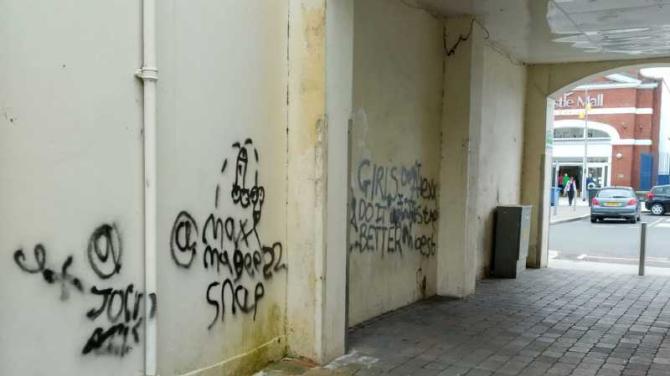 JOURNEY Church has swung into action and repainted a laneway off Antrim’s main street which had been blighted by graffiti.

And the big-hearted volunteers have urged locals to ‘watch this space’ - as something even bigger is coming.

Last month, we reported how, as work continues on the upgrade of Antrim’s Six Mile Water boardwalk and plans are afoot for the transformation of the Wellworths building and Ulster Bar corner, just feet away, ugly graffiti had appeared.

The laneway between Market Square and Hall’s Bridge, all earmarked for improvement and regeneration works to help ‘connectivity’ between town businesses and Antrim Castle Gardens, has been defaced repeatedly over recent weeks (see inset, right).

Ulster Unionist Alderman Paul Michael said that the damage was ‘shocking’ and has appealed to those responsible to respect their surroundings.

Antrim Town Councillors Neil Kelly said: “This type of behaviour is not acceptable and really does need to stop,” warned Councillor Kelly.

“We have gangs of youths gathering at a property in Riverside causing damage to local gardens in the surrounding areas.

“We also have reports of underage drinking and potential drug use at that location and in other areas such as Market Square, The Boardwalk and under the road bridge near the Antrim Forum car park and also at the stand at the running track.

“There has also been a lot of graffiti appearing which is quite shocking for those who see it.”

UUP Councillor Jim Montgomery echoed those sentiments, but stressed that the majority of teenagers were not involved in the disorder.

But now Journey Church pastor John Ashe and his flock have decided to step in and help improve the area.

“We hear a lot of complaints about things in the town and we decided to actually do something about it,” he said.

“We had initially set time and resources aside to do some work in the estates but as can be seen, there are problems in the town centre and we decided to tackle those this time.”

He added: “This is just the start.

“This generous funding will enable us to really brighten up this important area of Antrim and create something that we hope will put a smile on people’s faces and is something that young people will look after and take pride in.”