50 not out! Pat and Eddie enjoy a Golden Wedding Anniversary party 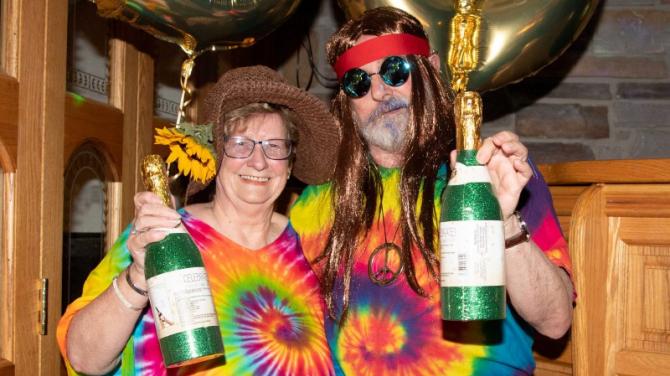 ANTRIM couple Eddie and Pat Meakin celebrated 50 golden years together at the weekend by throwing a party for family and friends at Rococo.

The couple met in Belfast and moved to England where they worked for a period before returning to Antrim and settling in Stiles, where they are still very well known and respected members of the community.

Back in those days, jobs were found in the pages of newspapers, so with the Troubles raging in Northern Ireland and work hard to come by, the Meakins went across the water to seek their fortune and build a new life for themselves.

Eddie managed pubs in London including the famous Jack Straw’s Castle and the Bull and Bush, meeting such celebrities as Rod Stewart and the late Errol Brown from Hot Chocolate, who Eddie said was ‘a gentleman’.

The pair then moved to Birmingham and lived and worked in the midlands for years before coming back to Northern Ireland.

Having met at the tail end of the swinging 60s and having grown up with a love of the music and culture of the 1970s, Eddie and Pat threw a themed party and invited attendees to come in fancy dress and enjoy some sights and sounds from the period.

The couple themselves looked very ‘groovy’ in tie-dye t-shirts and flared trousers and even cut into a specially made cake, complete with flower-power motifs and topped with a peace sign!

The couple are these days heavily involved in church and support mission work and are doted upon by their two daughters Jeanette and Melanie.

Friends and family from all over Northern Ireland and further afield made their way to Antrim to celebrate with the Meakins at the weekend and sources say that the celebrations went on into the early hours of Sunday morning!

Meanwhile, cards, gifts and well wishes winged their way from all over the world.

Pat said: “A big thank you to everyone who turned up at Rococo’s for Eddie and mine’s 50th Anniversary.

“A special thank you to our wonderful daughters Jeanette and Melanie for all the organising they did to make it a memorable night.

“Last and not least a big thank you to everyone who gave us cards and gifts.”