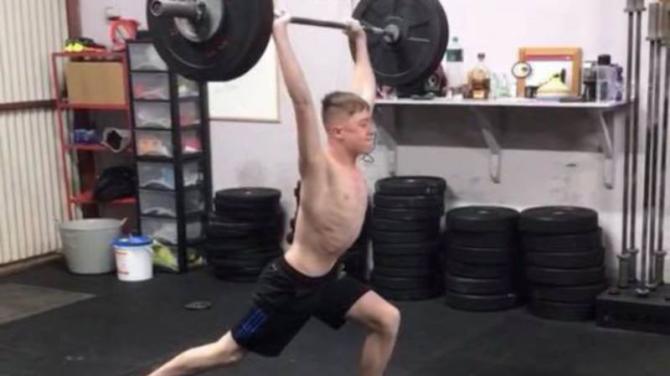 A CRUMLIN teenager is currently climbing the ranks in his age category in Ireland in the CrossFit discipline - and has his eyes on a major prize next year.

A pupil of Crumlin Integrated College, Samuel McFaul (15) got into the sport through his mum Marianna.

He trains at CrossFit Bad Bear in Glenavy, but the CrossFit games also has an online format where participants compete against each other, and themselves.

Performances are recorded and adjudicated by independent assessors.

It is practised by members of over 13,000 affiliated gyms, roughly half of which are located in the United States, and by individuals who complete daily workouts.

Hour-long classes at affiliated gyms, or ‘boxes’, typically include a warm-up, a skill development segment, the high-intensity ‘workout of the day’ (or WOD), and a period of individual or group stretching.

The ‘CrossFit Games’ have been held every summer since 2007.

Athletes at the Games compete in workouts they learn about only hours beforehand, sometimes including surprise element.

In 2011, the Games adopted an online qualification format, facilitating participation by athletes worldwide. During the five-week-long ‘CrossFit Open’, one new workout is released each week.

Athletes have several days to complete the workout and submit their scores online, with either a video or validation by a CrossFit affiliate.

Since the Open is available to any level of athlete, many affiliates encourage member participation and the number of worldwide participants can be in the hundreds of thousands.

The top CrossFit Open performers for individuals and teams in each region advance to the regional events, held over the following two months around the world.

Each regional event qualifies a specified number of its top finishers to send to the Games.

The Games include divisions for individuals of each gender, co-ed teams, and a number of Masters and Teenage age groups.

Since 2019, regionals were discontinued and individual athletes qualify by either being the national champion in the Open, finishing in the top 20 worldwide in the Open, winning a CrossFit-sanctioned event, or by invitation.

The 2019 Crossfit Open finished recently, with Sam McFaul taking 2nd place in Ireland 14-15 year old boys and 75th in the world, which will see him qualify for the online qualifiers for the CrossFit Games.

Sam only began his journey last April in Bad Bear’s teens class and showed great enthusiasm and dedication from the start.

Over the year he has moved to the main classes under the watchful eye of his Mum.

Last year he entered at Northern Ireland weightlifting competition where he placed first in his weight/age category.

He is always keen to volunteer for any friendly competition and entered ‘the Open’ for the first time this year, also placing 12th in the boys 14-15 category in the UK.

His coach Damian McGreevy said: “Sam is not a typical teenager, he never complains about a workout but instead gets on with it as that’s what he’s there to do .

“Sam works hard at everything he tries.”

The Guardian was also told about the ‘high tech’ side of things as Sam sends videos to his coach over Instagram.

Mum of three Marianna, who works two jobs continued: “The CrossFit community is so welcoming - you can go to a gym anywhere in the world and do a workout.”

Marianna is currently resting after sustaining a shoulder injury on the ice rink!

Talking about Sam’s involvement, she said: “He gets on very well with his closest competitor, who hails from Dublin.”

Sam, who is studying PE and is top of his class at Crumlin Integrated College added: “I love it, I can work at my own pace and I am not competing against other people, I am competing against myself, constantly trying to get better.”

The talented and dedicated young man now has his sights set on the CrossFit Games in the USA next year.

He also teachers other young people as part of his GCSE studies and hopes to carve out a career in the industry, after initially harbouring ambitions to become a firefighter.