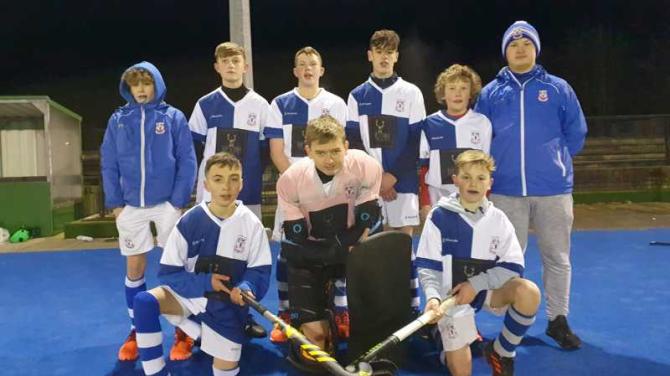 ANTRIM Firsts’ home against Ballymena was cancelled on Saturday and the Thirds Friday night game against Belfast Harlequins Thirds was frozen out.

This left the Seconds the only team who had a game last weekend and after the heavy defeat the previous Saturday at the hands of Lisnagarvey Fifths they took on Lisnagarvey Sixths at the Paddy Marks Arena on Saturday with some trepidation.

But those fears were soon dispelled when from their very first attack Alex McBride broke into the circle from the left to lay the ball across the goalmouth for Lyle Kane to nip in behind the defence to slam it into the net for a 1-0 lead.

Straight from the hit off Stuart Kernaghan intercepted the ball and played it quickly down the right wing and the cross from Chris Roe was swept into the net by the predator Kane to double the homeside’s advantage.

They won several more penalty corners but their efforts were blocked or the shots went wide.

The Antrim defenders were guilty of holding on to the ball that split second too long and were being caught in possession time after time which allowed their opponents to slowly get back into the game.

Just before the end of the first quarter Antrim won several corners but the Lisnagarvey goalkeeper made a couple of strong saves to prevent any more goals from being scored.

There was little between the teams in the second quarter as the game progressed until an Antrim defender’s over enthuastic tackle at the edge of the circle gave the opposition an unnecessary penalty corner. Lisnagarvey took full advantage and the ball was blasted against the backboards to bring them back into the game in the 28th minute.

For some reason Antrim were making things difficult for themselves, seemingly happy to defend in numbers, allowing their opponents to capitalise on the mistakes they were making from their slow clearances and bad passes.

Then in the final minute of the half at last a forceful run down the right wing and cross into the circle by Jack Morrison saw the inform Kane pounce on the perfect pass to fire it into the net for the 3-1 half time lead.

Then a Lisnagarvey late comer arrived to play in the second half and he was soon to make an impact with his strong defensive play and his good ball distribution to his forwards putting more pressure on the Antrim defenders.

Their pressure paid off and they eventually got the benefit when an Antrim player was caught in possession and the ball was quickly moved forward into the circle to be smashed into the net in the 46th minute to really lift their moral.

The Lisnagarvey pressure was intense and goalkeeper O’Neill was now in the thick of the action, brilliantly saving several Lisnagarvey penalty corner shots and clearing the ball away as the third quarter ended.

But Antrim fought back and in the 61st minute a right wing cross from Kane was swept high into the net by Roe to clinch the rewarding 4-2 victory.

Team thanks to Gary Molloy and the Lisnagarvey umpire for the efficient and fair manner in which they handled this game.

*The Seconds travel to Belfast this Friday night to play CIYMS Seconds in their next league game.

On Saturday, at 1pm, the Firsts will play Civil Service at home in what is a must win game even this early in the season to stay in the race for promotion.

The Thirds are at home to near neighbours Mossley Fifths in the league with a 2.30pm start.