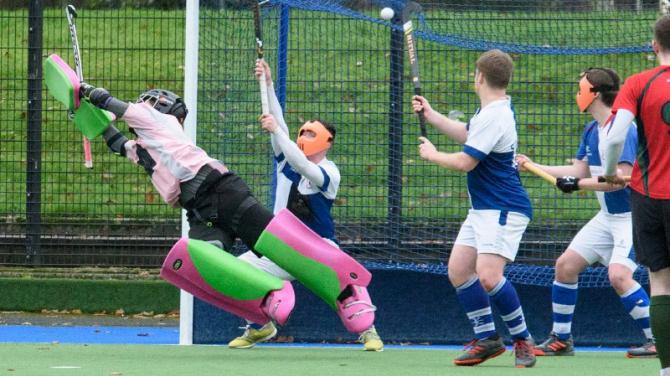 AFTER an enforced lay-off the previous week Antrim faced Civil Service, one of their biggest rivals for promotion, at the Paddy Marks Arena on Saturday - and ended up on the right side of a 4-3 scoreline.

After their shock defeat by Armagh a couple of weeks ago, this was a must win game for Antrim even though it is still very early in the season.

There was little between the teams for the first quarter as they struggled for supremacy. Indeed, the only thing of note was that Antrim’s Jack Kirkpatrick aggravated a recent hamstring injury and had to leave the field.

Already missing defenders Alan Mullan and Nial Black for this game Robbie Watt was his replacement.

Service won their first corner in the 11th minute but it was easily cleared away. Antrim’s goalkeeper Andy Heatley was in action kicking the ball clear from edge of circle shots.

Then in the 16th minute another kicked clearance by Heatley was adjudged to be dangerous and Service was awarded their first penalty corner of the game - significant because their player Chris Barnes is the most prolific penalty corner goal scorers in the league.

His shot was deflected past for a long corner from which the ball was cleared away.

From the hit out a Johnny McMeekin interchange with Dean Wilson allowed Sammy Clyde to get in a strong shot which was confidently blocked and cleared by the Service goal minder.

Antrim had the early pressure at the start of the second quarter and a good interchange between McMeekin, Steve Gammon and Jason Roe saw Ryan McCrea’s fierce shot saved and the ball cleared away by the Service goalkeeper.

Then Chris Wilson broke in to the circle from the left but the ball deflected off a defender for a long corner which was easily cleared.

Service won a penalty corner in the 22nd minute and this time sharpshooter Barnes confidently drag flicked the ball high into the net to give his team the 1-0 lead.

Straight from the hit off Service won the ball back and it was played to their winger who broke into the circle from the right. He crossed the ball into the goalmouth and in the ensuing scramble an Antrim player deflected it into the net and suddenly Service had the shock 2-0 lead.

Things got worse when in the 31st minute a Service player broke forward towards the Antrim circle obviously shielding the ball as he ran. An Antrim defender tried to make a tackle but the umpire very harshly penalised him awarding Service a penalty corner and Barnes repeated the dose to score their third goal by firing the ball high into the net to leave the Antrim team seemingly dead and buried with a mountain to climb.

Then with just a minute remaining in the half McCrea won a penalty corner when he was fouled in the circle.

The ball was played into the goalmouth and in the ensuing scramble a defender kicked it leaving the umpire no choice but to award Antrim a penalty stroke. Up stepped Jason Roe and he despatched the ball high into the net to give his team a glimmer of hope of getting back into the game.

With sprits on the rise Antrim attacked from the start of the second half and a lovely through pass from McCrea fell straight to Roe but he blazed the ball high over the crossbar.

Antrim seemed to be happy just to defend in numbers and depend on the occasional break out. This happened a couple of times but McCrea and McBride were outnumbered when they tried to break through on their own.

The Antrim goalkeeper voiced his objection and was promptly sin binned but the rule doesn’t allow any substutions at penalty corners so it had to be defended without a goalkeeper.

This time Clyde saved the day when he somehow diverted Barnes’s strong drag flick over the bye line for a long corner.

The team usually hasn’t the luxury of including a substitute goalkeeper in the squad but as the Third team was playing in the next game their teenage goalkeeper Ben Kennedy was there and had been included in the squad list.

So as soon as the corner was over Ben was brought on and he was soon tested saving another Barnes penalty pile driver a few minutes later.

McBride broke free on the left but his attempted reverse stick sweep flew harmlessly high and wide across the circle.

A 48th minute Service penalty corner was saved and the ball played upfield as the third quarter ended.

A Service cross from the right hit an Antrim foot in the goalmouth to win them another penalty corner and this time the ball from Barnes’s drag flick ricocheted off the crossbar on to an attacker’s body to give Antrim the hit out.

Then from a quick break out by Antrim in the 58th minute they won a penalty corner. Dean Wilson’s reverse stick effort was saved by the goalkeeper but the ball broke left to Steve Gammon who fired it goalwards only to be stopped on the line by a defender’s foot to win another penalty stroke.

The confident Roe wasted no time in scoring again with a strong drag flick to bring Antrim back into the game.

With hope rising and the adrenalin flowing Antrim surged back into the attack and a quick pass from Clyde allowed Chris Wilson to slam the ball past the onrushing goalkeeper high into the net to bring the scores level at 3-3.

But Service didn’t give up and they won a couple of penalty corner but Barnes’s shots were blocked by good Kennedy saves.

Play was end to end as both teams fought for the winner and as tension rose penalty corners were won and missed at both ends.

A Service long corner was driven wide and from the Antrim hit out the ball was played upfield through a McMeekin, Wilson interchange and then into the circle for McBride to find the time and space to slam it into the net to clinch this remarkable 4-3 victory.

This week Antrim will play Harlequins, their other serious rivals for promotion, at the Paddy Marks Arena with a 2.30pm start.