Winter Series gets an attack of wind! 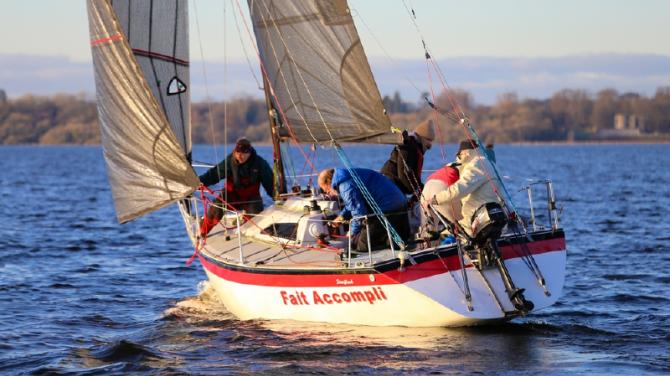 IT was another day of light winds, unusually frequent for Antrim Boat Club’s Winter Series - but at least there was wind!

A short course was set, allowing for the light north-westerly conditions, with the windward buoy in front of Shanes Castle.

All was set, but minutes before the start the wind picked up and shifted into the north.

The margin allowing for daylight is very small at this time of year, so the Race officer went ahead with the start.

The first beat was so skewed that it looked like some of the boats would make the windward mark without tacking and indeed the one small tack it required meant a very quick first leg indeed.

Alfie Myers, in Jezebel, was first there, closely followed by Ivan Miles in The Bull and Fait Accompli with guest skipper Pat Kelly, just recovered from illness, at the helm.

The problems for the course setters was compounded by the boats being able to navigate the both reaches without having to gybe the big colourful spinnakers and gennakers, and the first lap was complete in record time.

The faster boats were reveling in the conditions with slick sailing handling and good boat positioning albeit that the course allowed for fast transits.

A gap was developing between the first two and the rest of the fleet. Some of the boats, at the start of the second lap, tacked immediately into the beat meaning at least three tacks while others ran on at the leeward turn and attempted to judge the tack to the next mark, requiring fine judgement but saving a time-consuming tack if it was judged right.

While the dual between the Bull and Jezebel contained at the front, Fait Accompli who had reverted back to ‘the kids’ as crew, was making the best of it and, with her handicap, was still challenging for the lead.

The committee boat moved to the windward end of the course to take up position for the finish of what look like a very short contest.

Preparations to make signals to add another lap to the race were being made when the wind decided to take control again.

The first of, the now, scattered fleet started the last lap and it was obvious the breeze was losing force and that lap saw the boats slow and the gaps between them widening even more.

Now the problem was getting the race finished and everybody home before dark.

Jezebel closely followed by the Bull, still moving reasonably briskly, finished the race in just under an hour, the judge on the finish line struggling to see as he squinted into the low winter sun.

Jezebel crew were sure they had beaten The Bull, now the stopwatch was on Fait Accompli.

As Fait Accompli clawed her way up the last beat the wind was dying all the time and the minutes ticking by.

She was losing all of her hard-won advantages.

The anxious Jezebel who had been hovering timing the line turned and motored in happy the time gap was large enough, as Fait Accompli nosed over the line.

Tictac also suffering badly in the light winds finished leaving a big gap back to Petrushka who was really struggling to finish.