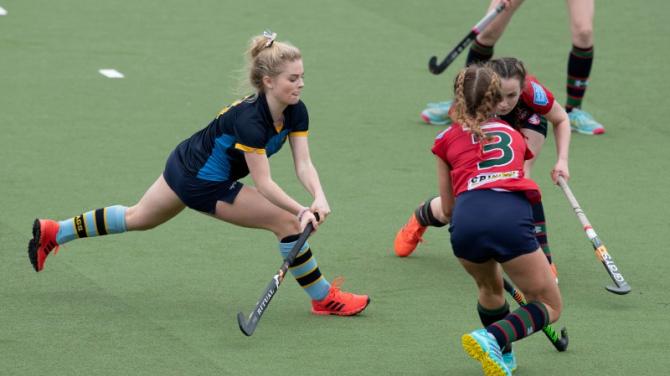 AFTER a hearty breakfast made by the school dinner ladies the Antrim Grammar School girls’ hockey team along with a party of 120 supporters led by the school principal and vice principal set off last Wednesday morning as a history making squad to play Coleraine Grammar in the Ulster Hockey Senior Girls Plate Final for the very first time.

Battling their way through to the final was a result of hard work, dedication and commitment and has been commendable making everyone so proud of all the squad of their achievements all year.

Played at the Civil Service grounds at Stormont the girls got off to a shaky start as they struggled to overcome their early nerves but they quickly settled with Alix Kerr and Aimee Tessier pushing the team forward to penetrate the Coleraine circle on numerous occasions.

Ella McCooke won a penalty corner but unfortunately could not convert her chance.

Coleraine made an excellent counter attack and goalkeeper Olivia Fry made a solid save and the first quarter ended scoreless.

The second quarter continued as the first with both teams struggling for the upper hand until the breakthrough came in the 30th minute when from a Coleraine shot at goal the ball wrong footed goalkeeper Fry when it took a lucky deflection on the way.

Going into the third quarter Antrim were fighting back strongly and captain Ella McCooke deservedly brought the scores level from an excellent short corner shot in the 45th minute.

Antrim pressed their advantage but Alix Kerr was unlucky to see her goal bound shots saved by the Coleraine keeper and the ball cleared away.

Coleraine survived this period of pressure and from an excellent counter attack they took the lead again when a strong edge of circle shot crashed against the backboards past the helpless goalkeeper.

In the fourth and final quarter a determined Antrim team was focused and driven as they fought for the equaliser.

Coach James Dodsworth made changes to the forward line but lady luck was not on their side and Tara Robinson was so unfortunate when two of her goal bound shots hit the post and in the very last minute the team won a penalty corner but after consulting with his colleague who had seen an Antrim infringement the engaged umpire changed his mind and the game ended very disappointingly for the Grammar team.

This was a hard defeat for the girls to take as they had worked so hard not only in this match but throughout the season.

Everyone wishes the Year 14 leavers all the best of luck with the hope that this season’s success will encourage them to keep on playing hockey. Many thank to all who supported the team not only on Wednesday but throughout the year an encouragement which has meant so much to all the girls.