Bobby McVeigh was born to run! 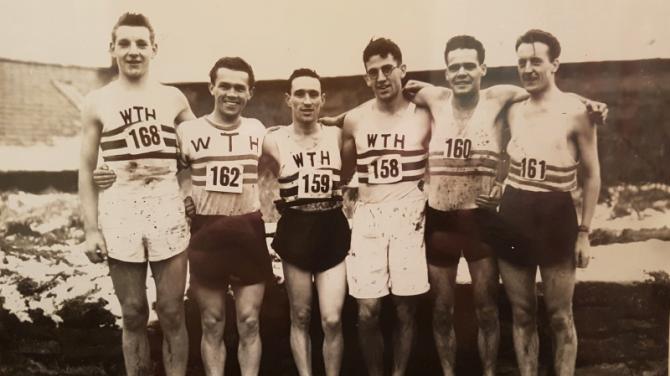 BOBBY McVeigh can say something that very few other people in Antrim can - the place where he was born is now a worldwide tourism destination!

For Pogue’s Entry was also the childhood home of writer Alexander Irvine, who immortalised his former residence in the classic book ‘My Lady of the Chimney Corner’.

Indeed, if you visit the heritage centre - now owned and run by Antrim and Newtownabbey Borough Council - you can see a picture of the McVeigh family along with their neighbour Mrs Daney.

Bobby’s parents had moved to Pogue’s Entry from Balloo, before coming into the town and moving back out again, this time to the Boghead, close to where the Deerpark Hotel once stood - both it and the family home are now long gone.

With his father a veteran of both world wars, Bobby and his family moved to a serviceman’s home at Bourlon Road.

At the junction of the roads to Antrim, Belfast and Ballyclare, it was a great place for the seven children to live and watch all the comings and goings.

When the family were still at the Boghead, his elder brother and sister wheeled him in his pram to his grandfather’s home on Church Street before going on to Bruce Memorial School, which Bobby later attended.

His grandfather Sam had lost an arm and part of his foot working on the railways many years previously.

“There wasn’t a lot for young people to do in Antrim,” he said.

“It was different in those days, much more innocent, a big gang of us would put on cowboy hats and get our toy guns and take the town by storm!

“They were happy times, there was a picture house by the chapel and every shop was full. If you wanted something, you could get it in Antrim.”

During the war, Bobby recalls the different army camps, with ‘coloured’ soldiers stationed down near the Lough and others at the Castle Grounds and Muckamore.

“We were so excited when the Americans came past in their lorries,” he said.

“They gave us sweets, oranges and lemonade.

“One Christmas the coloured soldiers took the school down to look at the camp and let us watch a film, we had a great time.

“Sometimes the soldiers would come up from the castle camp to drill near our house.

“My friend Cecil Donnell and I would get a bit of wood painted like a rifle and we would stand on the footpath and copy them.

“One day the Sergeant Major pulled two soldiers out of the line and made them stand on the footpath and put us in to do the drill!”

Bobby’s father would never talk about his wartime experiences, but the family had plenty of their own.

“My brothers were in the army and RAF and I remember the Belfast Blitz, when I was about 14 or 15. My brother in the air force was home and he took me and my sister Florrie up to the bedroom window.

“The skyline was red, we could see the planes coming and the bombs falling.

“We all knew people in Belfast and some relatives did die.

“That week the cars came into Antrim from Belfast, one after the other, people were fleeing.

“My brothers were stuck here for a few days as there were no boats going out.

“I remember when the war finished there was a big bonfire at Riverside and me and some mates went down to watch it.

“So me and my friends Alec and Billy Loughlin only started making it home about 1am.

“We had to walk home past the old Unitarian Church and there were big trees outside called the Seven Sisters near where Baird’s Funeral Directors is now. It was rumoured that the place was haunted and it was very scary.

“Then when they realised I was halfway home and past Eddie Byrne’s sweet shop, they knew they had to walk back, they lived up an entry at the top of Church Street.

“So nothing would do only I had to walk back again to keep them company as well!

“So I did and then I ran back past the ‘haunted church’ and the sweet shop and all of a sudden there was someone on a bicycle and a gruff voice saying ‘where are you going at this time of night boy? You should have been in bed long ago!’

“It was Paddy Fox, the policeman. I was never so glad to get home that night.”

Unlike his brothers, Bobby’s father did not allow him to join the forces.

Bobby left school at 14 and his first job was as a shop boy at SM Enkatell’s, measuring out barley, peas and flour with William Montgomery, who was about a foot taller than him.

“We were like the lion and the mouse!” said Bobby, who was earning ‘ten bob a week’ and working from 8am to 6pm with a half day on a Wednesday.

He then went to work on a planing machine at Rea’s Sawmill near the railway station, which he described as ‘hard work’.

Bobby then went to work in a spinning mill near Doagh and he spent a year in Enkalon, although he concedes that the nightshift ‘didn’t agree with him’.

It was then on to many years of shop work, first for Mrs Hutchinson at the Spar on Railway Street after the death of her husband in a boating accident on Lough Neagh, then to Elliot’s Mace and for Arthur Sloan in Kells.

In the early 1950s, Ella Wilson of Shane Street in Randalstown won his heart.

With Randalstown and Antrim both small, close-knit communities in those days, the pair were already acquainted, but really hit it off after he attended a Christian mission with his pal Billy Nicholl.

The pair married at the OC Church in Randalstown in 1955 and moved to the Dublin Road estate, where Bobby remains to this day, albeit in his third address.

“At some times it seemed like when I was working my wife wasn’t and vice versa.

“One day, my friend Norman Hannan asked me to go and play golf with him.

“I said ‘I’ve no clubs’ and he said that the groundsman would lend us a set, which he did.

“So we played half a day and I really enjoyed it.

“My wife went up to the Athletics Stores in Belfast and bought me a set of golf clubs.

“I have been a member of Massereene ever since, trying to play two or three days a week.”

Another passion for Bobby is running.

“There was the Boys’ Brigade and the Girl Guides and the Brownies and Scouts,” he said.

“The BB and the Scouts used to race each other for trophies.

“Alan Anderson from Riverside took myself and Bobby McCormick and his brother Joe to Willowfield to see if we had a chance with the Willowfield Temperance Harriers Club, who were very successful in cross country and road races.”

And the rest is history!

“Joe and I both won senior medals for Ireland and Bobby won a youth medal.

“We would get changed into our running togs at an old hall near where the roundabout at Church Street is and we would run to Templepatrick, Parkgate and then back to Antrim, twice a week. Rain, hail or shine, we were always out.

“People would shout at us ‘there’s the headers!’

“But those people are long gone, and me and Joe and Bobby are all still here. Booby is in Kells and Joe is in Parkgate.

“I wish I hadn’t given up running, I never had a day sick.

“I had to give up golf for a while when I had an operation a year and a half a go.

“All the boys I play with ended up as dentists and schoolmasters and bankers and doctors.”

And now he is delighted that his family is taking up the mantle.

“We only had one daughter and I could never get her to go out running with me!

“When my grandson was born the doctors told his parents that there was something wrong, but they didn’t know what, and he did not put his foot on the ground until he was five.

“And now, he and his mother are getting ready to run their first half marathon!

“They both go to the Parkrun every Saturday and I am so delighted.

“My granddaughter recently graduated and I am looking forward to going to my grandson’s birthday party in April, when he will be turning 21.”

Reflecting on his life, Bobby said: “We had bad times and good times in Antrim, but mostly good.

“The war years were hard but everyone stuck together and everyone knew everyone else.

“It is a great place to live and I have so many happy memories.”