It's 'tee' time with Tommy! 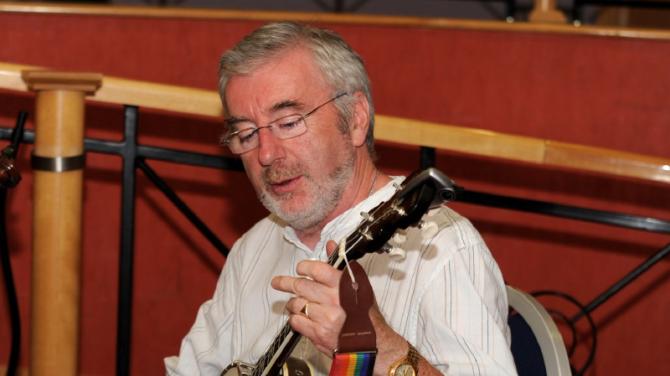 WELL known in sporting and education circles, Tommy Crilly is more often these days to be found out in the garden of his Dublin Road home or running around after his grandchildren.

A Magherafelt native, like many who made Antrim their home, his family came to the town as part of the first wave of Enkalon workers, with his uncle one of the first 22 through the door of the Dutch-owned factory.

With wages twice as high as the Northern Ireland average, the company attracted families from all over the province.

And in Antrim Tommy has stayed.

He was at Primary School in Armagh before the family moved to Limetree Close in 1964, to a brand new estate called Ballycraigy.

“This was before the Troubles. I made lots of friends, I suppose you could say we were part of the Baby Boom and there were lots of us kids running around.

“Clifford Whiteside was a good pal, he went off to Australia.

“After a while we moved to the Dublin Road, it was a great place to be a young lad.

“The estate backed on to Massereene Golf Club.

“We used to go hunting for golf balls for financial gain.

“But golf became a big part of our lives.

“A police sergeant called Eugene O’Boyle, who was the terror of all us young boys, actually took me into the club and fixed it up for me to get a set of clubs from the shop, paid off at £2 a week!

Football was another big passion.

“The big green on Dublin Road was brilliant for football and we had a local derby with Firfields.

“We spent every spare moment on that green.

“Firfields had a phenomenal squad with some very talented players for such a small estate.

“We never were able to beat them, I think our best result was a 2-2 draw!

“Their ‘home’ field was a big bit of land where Antrim Forum is now - and of course we had no goal posts.”

The Troubles were just around the corner, and the Crillys were one of four families targeted in a sectarian petrol bomb attack in the early 1970s ‘by very misguided people’.

“Thankfully nobody left, but relationships started to sour.”

Tommy was educated at St Malachy’s College in Belfast, in the same year as former Nottingham Forest and Northern Ireland international player and current Republic of Ireland manager, Martin O’Neill.

He worked at the airport for a period, working on building the runway and the RAF accommodation block at Aldergrove.

Acknowledging that 1972 was ‘a bad year’, in May he left for England, working in Clacton with the intention to travel to London and live and work their permanently.

But fate intervened and he got a late call-up to teacher training college back in Northern Ireland.

“Back then you got a grant, there were great opportunities to travel and I was one of the first to get a J1 Visa for America,” he recalls.

“Getting a college place was a big opportunity at that time so I decided to scrap my plans in England and go for it.”

Tommy completed four years of training and qualified as a post-primary teacher of French and Irish.

He then went to France for a year, to Ussel.

Sitting in a cafe one day, he met a famous face.

“A big, tall, handsome man came into the cafe, he looked very ‘well to do’, and the locals made a big fuss of him,” said Tommy.

“My friends said ‘Jacques, you must come here and meet ‘Thomas’, he is Irish.

“So he came over and we shook hands and I learned later that this was Jacques Chirac, who had already been elected Prime Minister of France and went on to become the President.

“I always thought it was interesting that he had to meet me because I was from Ireland!

“I still have the election flyer from that year, 1976.

Home beckoned once again and despite qualifying as a post-primary teacher, Tommy took a job at St Comgall’s in Antrim, working there from 1977 to 1990.

“I developed a real interest in maths and how children learn maths and later when I went on to work at the Education Authority I continued that work,” he said.

“I became something of an expert in that field.

“When I first came to St Comgall’s, it was very grey and bleak. It was built in 1952 by a company called Orlet, which also built the Firfields estate.

“It was typical of that post-war style, but it was pretty depressing.

“The staff made a great team and were very dedicated.

“The principal of the time was Hilary Cush and he ensured it was all painted and brightened up and made it a much nicer place to be.

“The growth of Enkalon brought with it a huge influx of people and the school had to be expanded.

“Even today, the school is full to capacity.”

In 2005, Tommy returned to substitute teaching, with a period at Malone Integrated College in Belfast.

“There have been many changes over the years. When I started they were trying to get away from all the desks facing the front, and teaching by telling the pupils to read from page 40 to page 48,” he said.

“There was more of a focus on getting children around one table and working collaboratively.

“Teachers were given guidelines but had a lot more freedom to teach in their own way and help the pupils who were less able, that couldn’t adapt to the old drilling style.

“Some teachers were reluctant to change, which was understandable.

“Now we seem to have come full circle.

“Technology has certainly changed, I remember the first overhead projectors, which were wonderful tools and probably still have a place now.

“Computers and whiteboards have opened everything up, anything you could possibly want to tell a child is there.

“I would say that teaching is probably not as enjoyable now.

“In years gone by the principal would give you a plan which would take up three or four pages of an exercise book, we would sign it, and the rest was up to us.

“Now I think teachers are burdened with note taking and note making.

“I do remember one incident in school, the bell was going and everyone was charging out the door, myself and another teacher had an appointment to go to and we were rushing out past the pupils shouting: “Stop, let the teachers out first!” and the look on their faces was priceless.

“That wouldn’t happen now, you drive past a school at 4pm or 5pm and the teachers are all still there.

“We used to get together, about ten of us, and play badminton after school and have some craic.

“I can’t see that happening now, it’s the kind of thing that probably should be done.”

Tommy’s love of sport continues to this day and he played gaelic football up until the age of 42.

“I’m not an athlete, I’d say I am more suited to the administration style of things!” he said.

A stalwart of CLG Naomh Comhghall, he acted as a coach and administrator and received an award in the 1990s from former Antrim Mayor Paddy Marks.

“I remember being described in the Antrim Guardian as a founder member of Naomh Comhghall,” he said.

“But the club was founded in 1924 and the first recording of a gaelic football match in Antrim was in 1890!

“We made a lot of strides but there were tough times too.

“We were asked to leave our pitch at Allen Park to make way for the new driving range, with a promise from the old council that we would get a replacement ground.

“However, the land we were offered was not big enough and it was covered in golf balls which made it unsafe to play.

“We were in a meeting at the Deerpark and we were assured of another pitch but it didn’t happen, the council did not honour their part of the deal.

“Volunteers started drifting away and it was hard to get young people interested and by the mid 2000s we only had one adult team.

“I was invited back as chairman and my wife coaxed me into it.

“The aim was to secure a permanent pitch and that’s how we ended up working towards the Centre of Excellence at Dunsilly.

“There was a great deal of team work and effort, we got the Sports Council on board, there was a lot of fundraising and we travelled the country selling £20 tickets, raising £125,000.

“We were lucky that so many volunteers came on board and helped to drive the project and the club forward.

“It was great to see people getting each other motivated and involved.”

Tommy stepped back in 2015 but added that the club is still very dependent on volunteers.

“I think that everyone should volunteer for something, even if that is just two hours a week.

“It is in giving that we receive, I really do believe that.”

As well as sport, Tommy’s other passions include music - he plays guitar, banjo and mandolin - particularly Irish traditional, folk and rock.

He also has a keen interest in photography.

“People like John Taggart, John McIlwaine and Stephen Davison were a great help to me,” he said.

“In Antrim we are so lucky, there are so many beautiful places, there are so many good walks, and I don’t think there is a better town in Northern Ireland if you want to play sport, there isn’t any sport that isn’t catered for in the town, the facilities are excellent.

“Antrim gets a bad press but it is a great place to live, there is so much natural beauty and the people are so good

“One thing I don’t understand is why, after everything that [Dutch company] Enkalon brought to the borough, there is not more recognition.

“That factory brought 3,000 jobs, schools were opened, estates were built to house people, yet all we have is a stand at Allen Park - there’s not even so much as an ‘Orange Avenue’!” Tommy joked.