'King' Billy's got the gift of the gab! 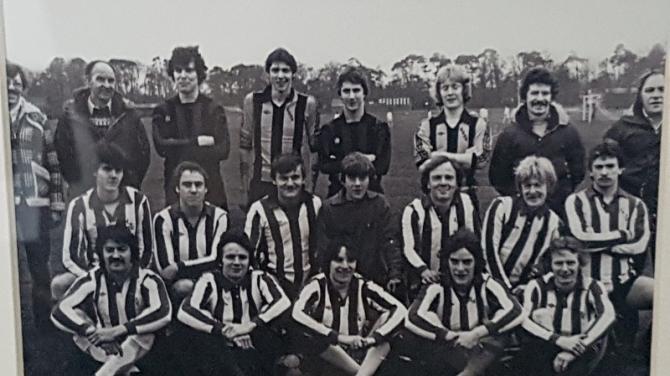 HE’s come a long way from getting caught scrumping apples to becoming known as one of the stalwarts of the Northern Ireland amateur football world.

And in between, he’s guarded one of the world’s most notorious war criminals and become a pioneer of youth work in his adopted home town of Antrim.

Billy McClurkin is definitely one of life’s storytellers.

His grandson asked him to write down some of his life story for a school project, and he’s already eight chapters in.

Billy grew up in Glendun Drive in Ballymena, and in his own words, didn’t grow up, but ‘had to fight my way up’.

Straight from the lyrics of Johnny Cash’s classic ‘A Boy Named Sue’ he said: “I found out years later that my father was trying to toughen me up.

“He knew there were tough guys out there and he wanted me to be able to fight my corner.

“It was different back then.”

Billy learned to swim in the Braid.

“Someone threw me in, so it was doggy paddle or die!” he laughed.

As a boy, he and his mates would go on raiding parties on the old allotments opposite the People’s Park, occasionally dropping crab-apples on to the heads of unsuspecting gardeners before being chased.

At one time, he and a friend were shinnying into the garden of a well-known doctor to liberate some particularly plump gooseberries when he was met with the resident springer spaniel.

A quick reverse sent his friend flying through the undergrowth and when Billy arrived home clabbered in muck, he blamed the other boy for pushing him over - until a knock came to the door.

“I had to work for that doctor one day a week, tidying the garden for a month,” he said.

“But at the end of it, the family got a box of fruit. They got all the good stuff and I was saved a few apples.

“We never got things like strawberries and gooseberries so it was a real luxury.

Billy met his future wife Jean at the Flamingo after a series of knock-backs.

“It was a long walk across one side of the dancefloor to the other to ask a girl to dance, and an even longer walk back when you were rejected.

“Some of the girls were cheeky so you had to have some one-liners.

“One girl said that she didn’t dance with babies, so you would say ‘pardon me, I didn’t know you were in that condition’.

“Another one was ‘what do you want for five bob? Elvis?!’

“I got my mate to ask Jean’s mate if she would dance with me, and she shouted ‘come and ask yourself!’”

Billy would soon be off to the army and after an initial flurry of letters, they lost touch.

However when he returned, Jean was waiting for him.

“She had fallen out with a fella in a leather jacket. I was a mod so I automatically didn’t like him.

Jean and Billy were together for over five decades until her death 14 years ago.

Other adventures included going to a dance in Cloughmills with two pals, all riding on the same motorbike.

After a ‘who do you think you’re looking at’ altercation, Billy got ‘a dig in the bake’ from another (much taller) reveller, leaving him with a bloody nose, and his mates decided to wade in.

“We had to scarper, so we all jumped back on the bike.

“My friend was zooming down the Ballymena line and off I came.

“The police were called and I ended up in court for fighting.

“Jack McCann represented me. Because I was so small and the other fella was so big, I was told to cry.

“So there I was snivelling and crying about this big lad hitting me at five feet and nil.

“The judge called him a disgrace, for injuring the poor wee fella, so he was fined £25 and I got off.

“Jack McCann asked me if I wanted a job!”

It was in the army that Billy met one of the most famous bands to ever grace the stage of the Flamingo.

“I hated the Rolling Stones,” he admits.

“I was in a band when I was in Berlin called The Digits and we were playing a big complex as support for some of the best acts of the day.

“In the green room, a fan reached out to touch Mick Jagger and he shook her off. I thought they were all very rude and arrogant.”

While in Germany, Billy guarded Rudolf Hess, who eventually killed himself at the age of 93 in 1987.

He had been the sole prisoner in Spandau Prison since the release of fellow Nazis Albert Speer and Baldur von Schirach in 1966.

Hess was deputy führer from 1933 until his flight to Scotland in 1941 in an attempt to hold peace talks with the Duke of Hamilton.

He was sentenced to life imprisonment at the Nuremberg trials in 1946 for crimes against peace and taken with six other Nazis to Spandau allied military prison in the British sector of Berlin.

“He was away with it,” said Billy.

“He had a garden he looked after and one day he went mad and trashed it.

“Then the next day he was fine and started patching it all up.

“He took a cigarette off a guard once and then squealed on him and caused all sorts of trouble.”

Billy was also stationed at Eglinton near Derry and eventually went off to Aden, finally leaving the army after an injury.

He admits struggling at Guy’s School and Ballymena Intermediate, years later being told that he had a condition now known as dyslexia.

Skiving school to pick spuds for pocket money led to a knock on the door from the fearsome Sergeant Hughes - he never missed a day again, but left as soon as he was allowed.

Billy moved to Antrim to be near Jean and got a job, like many others, in Enkalon.

He lived for a time in lodgings above Mrs Topping’s Fruit Shop, on the same street as the famous Billy’s Cafe - all now sadly obliterated.

The happy couple then moved to the ‘Anketell’ flats in the town.

“The layout was strange to say the least.

“The bedroom, living room and kitchen were all separate rooms around the main corridor.

“We knocked a little hatch between the living room and kitchen, which was silly of us because we weren’t there very long!”

The couple moved between homes in Cedarmount and Greystone and there was also a spell back in Ballymena when Billy worked for Patton’s and lived on Doury Road.

But back to Antrim they came - which pleased Jean - and the family settled in Kilgreel Road for over 40 years.

He now lives just a stone’s throw away in Kilbeg Walk.

In Antrim Billy was part of a famous ‘ghost story’ which is still talked about to this day.

“Me and Jean and her brother and sister and their other halves were going to the Castle Grounds for a ‘court’,” he said.

“It was pitch black and we were walking past part of the castle which was still standing after the fire.

“We heard this ‘oooooo’ noise and we all ran.

“We crept back and all of a sudden we saw this white apparition and then we were really terrified.”

News of the sightings spread.

“All the town was talking about it, there were TV cameras out and even an ice cream van turned up.

“Eventually someone from the council went in and discovered it was a big pair of owls nesting.

“Everyone was raging with him as the ghosts had become something of an industry for the town!”

Injury put paid to Billy’s own sporting career, but following a spell as a referee, he turned his attention to coaching.

Davy Carnwrath fell on his mercy after Paddy Carney walked out of the manager’s position at Rathenraw FC - and the rest is history.

“At that time the local matches in the Ballymena Saturday Morning League were being played at the Steeple.

“They were losing 8-0, 10-0, the first thing I did was swap the centre-forward and the centre-half and we started winning.”

The side eventually made it to the Junior Shield final, the first in the league to do so, but lost.

“It was a mixed team and included a police sergeant,” Billy said.

His footballing career brought him into contact with the likes of Antrim Alliance councillor Neil Kelly and others he still counts as good friends today.

Football also led to his life going in yet another new direction.

“We were using the gym at Parkhall High and we were due to get wrapped up at 7.30pm.

“Jackie Davis came in and asked me for a hand with the youth club.

“I had no experience but he said they were so short-staffed and people kept letting him down, so I agreed.”

That was in the early 1980s and sparked a passion with youth work which continues to this day.

Billy eventually applied for a grant and enrolled on a course in London - handy for an Arsenal fan - and got his diploma, at that time, well into in his 40s.

Other roles included the ACE Scheme at St Comgall’s Youth Club, where Billy supervised out-of-work young people on jobs like grass-cutting and gardening in areas like Ballycraigy, Rathenraw and Stiles.

“I got to meet lots of people and I got to see how little there was out there for young people to be doing.

“I engaged with them on the streets and tried to get them into the youth clubs.”

These days, he says, some of the same problems pervade in terms of youth engagement.

“The big change I see in football is the age that kids are getting involved.

“When I was a lad you were always kicking a ball about because there was nothing else to do, you learned your skill on the streets and you started in the clubs very young.

“Nowadays there are computers and the internet and other distractions and they are coming along later.

“There are more leagues now and there are clubs doing good work still, but it is harder.

“With youth clubs, they need things to do and places to go.

“I disagreed with doing away with the tuck shops.

“Yes there is a problem with obesity, but for a lot of kids, that is where they learned teamwork and how to handle money and plenty of them got jobs off the back of it.

Rathenraw FC eventually became FC Antrim and in 2019, Billy, currently chairman, will have been involved for 40 years.

He has also been heavily involved in the BEAT youth intervention programme in Ballycraigy and with the Rehability charity.

“If and when people need help, I try and help,” he said.

“Every time I think of jacking everything in, someone calls me and asks me for a hand with something!

“I always just seem to be able to get people together and get stuff done.”

One gets the impression that there are a few more chapters of Billy’s life story left to write.