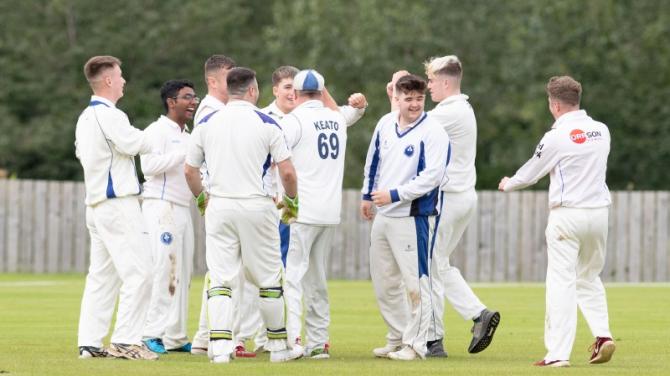 AFTER another wet week, Muckamore had Cregagh as the visitors to Moylena on Saturday in their final league game of the season - and a League title decider.

The soggy conditions forced the game to be played on the artificial grass wicket.

They sent J Hunter and A McCormick in to open their innings against Muckamore pace bowlers Ewan Wilson and Aaron McKinley.

Twelve runs were scored off McKinley’s first four deliveries but off his fifth McCormick mistimed his shot to be well caught by ‘square leg’ fielder Jude Keates.

M Johnston joined Hunter and they took the score to 58 runs into the eight over before the former was caught on the long on boundary by Luke Allen off a Richard Keates delivery after scoring 26 runs.

A Johnston was next and in the next eight overs they added another 47 runs.

Then McKinley was brought back to bowl and off his first delivery, he had A Johnston caught by ‘mid off’ fielder Jude Keates to be dismissed for 22 runs.

He was followed by C Irvine, to whom he bowled first ball, leaving Cregagh on 106 runs for four wickets in the 16th over.

David Steen bowled the next over and he had new batsman A Beattie stumped by Chris Keenan off his third delivery.

The new batsman was R Moore, but he was caught by ‘long off’ fielder Luke Allen in McKinley’s next over for a duck.

From the last 16 deliveries, 13 runs were added off the bat.

Bowler Steen had C Shannon caught by ‘long off’ fielder Luke Allen and bowler Wilson had former Muckamore player J Hunter caught on the long on boundary by Gordon after top scoring with 53 runs.

With 15 extras, this took the final Cregagh score to 135 runs for eight wickets in their allocated 20 overs.

A final score which should have been much less, because of at least five catches being dropped by poor Muckamore fielding.

Best of the Muckamore bowlers were Aaron McKinley who took four wickets for 37 runs and David Steen who took two wickets for 15 runs.

By this time, word had filtered through that results elsewhere had meant that the winner of this game would win the league so the pressure was intense on both teams.

Ewan Wilson and Chris Keenan were the Muckamore opening batsmen against Cregagh pace bowlers D Cooper and A Beattie.

They quickly took the score to 25 runs into the third over before Keenan was stumped by wicket keeper Hunter off a Cooper delivery for only two runs.

Sam Gordon joined Wilson and they added 17 runs in the next four overs, before the latter mistimed his shot to give bowler Shannon an easy return catch to end his aggressive 30 run innings.

Luke Allen was in next and with Gordon, they took the score to 51 runs into the 9th over before rain forced the players off the pitch.

When play resumed about 30 minutes later the Duckworth Lewis calculation had ruled that five overs had been lost and the total now needed would be 105 runs.

The score had reached 57 runs into the twelfth over when Luke Allen was caught by the cover point fielder.

Lucky for him, the umpire had called the delivery a ‘no ball’ and he was allowed to stay to face a ‘free ball’ which again was caught without any penalty to the batsman.

39 more runs were added in the next five overs before Luke Allen was caught by ‘backward square’ fielder Shannon off a McCormick delivery.

With 24 runs needed off the next 20 deliveries, the pressure was on as Richard Keates joined Gordon.

He dismissed Gordon LBW for 31 runs with his first delivery allowing Leslie Allen to bat next.

But with only five deliveries remaining, Keates went for a big boundary hit but the ball fell short and he was caught on the long off boundary by fielder M Johnston after scoring six runs.

Jamie Jackson was next, but he could only watch his partner try but score only two of the nine runs needed to give Cregagh the seven run victory and the league title.

The game was Sponsored by Wilson Electrical Services at 61b Oldwood Road Antrim, who have been serving the local area for over 20 years

This Saturday sees the season's end with the Annual Six a Side Tournament played for the George Goodman Memorial Cup at Moylena. Eight teams will compete for the Trophy with an 11am start for the first games.