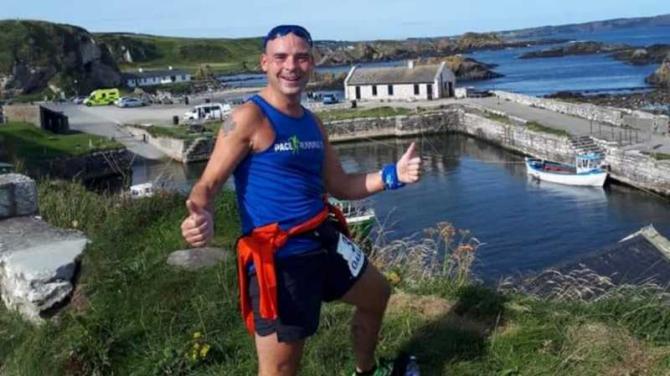 HE’S completed the Mourne Way Marathon and run hundreds of miles all over Ireland north and south, dressed up as a Minion, a Smurf and even Charlie Chaplin.

And this time Antrim man Arron Johnston is hoping to prove that ‘Guinness is Good for You’ by running to the world famous brewery in Dublin and back, from the Europa Hotel in Belfast.

And it’s all in aid of a charity which was set up with a lot of help from Princess Diana.

The local Pace Running Club athlete will be beginning the challenge on Friday September 18.

Around 30 ultra runners will leave the Crown Bar area at midday for the 107-mile trek.

They will touch the famous brewery gates and perhaps pose for photos and a some refreshments before starting their return leg.

“Training for ultra marathons is about 50 miles a week,” said Arron, who lives in Millhouse.

“This is made up of short runs of six miles then long runs of 20 miles up to 50 once a week.

“This takes a lot of time, commitment and support from family, especially my wife Lorna Johnston, who will be my support crew during the run.”

Arron has now run several 24-hour events over the past few years, but this will be his first time trying it on the roads.

Runners will have 36 hours to complete the challenge, organised by Atlas Running.

“It will be like running four marathons in one go.” said Arron.

“I hope to complete the course in about 24 to 26 hours with no sleep and just keep going.”

Arron will be running to raise funds and awareness for Children With Cancer UK.

The charity was founded after leukaemia claimed the life of 14-year-old Paul O’Gorman in 1987.

Within weeks of his death, his family started fundraising.

Deeply moved by the double tragedy, she personally helped to establish this charity.

Since 1988, it has raised over £250 million to help the fight against childhood cancer.

The charity has funded over 200 research projects and currently has more than 60 underway at leading centres around the UK.

This includes research that aims to drive up survival rates in even the hardest-to-treat cancers and to reduce the burden of toxicity for young cancer patients.

Atlas Running was founded by brothers Adrian and Sammy Daye.

Hi Clare, yes you have wrote about 24hour runs in Victoria park were it was for links2pink charity.

Said Arron: “The training has been totally different as this run is not loops, it is one way so requires us to carry supplies and have a race crew to help us, that drived the route with the runners.

“Along with lots of miles per week, it’s about pacing and time spent on the feet, to get used to long periods.”

Arron was originally meant to be running the Berlin marathon in aid of Children With Cancer UK, but that was cancelled due to Covid.

“I decided to keep fundraising,” he said.

“Cancer does not stop just because normal life for us changes.”