The battle of Antrim! 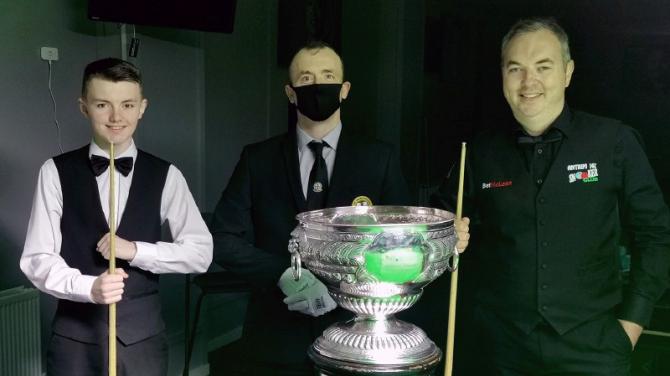 THE nail-biting final of this year’s Northern Ireland Amateur Snooker Championship proved to be very much a battle of Antrim!

No fewer than 90 players took part in the event, hoping to following in the footsteps of Alex Higgins and local hero Mark Allen.

Due to COVID restrictions, the event was held over three consecutive weekends in Antrim.

And that suited reigning champ Declan Lavery from Antrim just fine! He dropped just one frame on his way to the final.

His opponent was 16-year-old Robbie McGuigan, who is already a Challenge Tour finalist. Hugely talented, surely the only way is up for one of the game’s ffinest prospects.

The first four frames of the two-session final were shared with both players making a half-century. McGuigan then compiled breaks of 110 and 76 in two of the next three frames which sandwiched Lavery’s effort of 57 in frame six, but it was the latter who finished the first session stronger as he claimed the final two frames for a 5-4 lead.

On resumption, Lavery swelled his advantage, moving one away from glory at 9-5 up. However, impressive McGuigan refused to quit, stringing together four consecutive frames including back-to-back breaks of 128 and then 132 - the two highest breaks of the tournament - to force a decider.

Despite this onslaught of scoring from his rival, though, Lavery composed himself in the last frame. An initial run of 46 helped him take early control of the decider which he later converted into victory and a successful defence of the championship.

“I played great up to the final winning 18 frames in a row, followed by the opening frame of the final. Then it was about hanging on to Robbie,” he said.

“I couldn’t believe I was 5-4 up as he played some great snooker in the first session. I took control at 9-5 and should have killed the match off but he cleared twice and then made two of the best breaks I’ve ever seen in about only ten minutes for 9-9.

“I’m really proud the way I held myself together in the decider and over the moon to retain my title. It might be hard to get the hat-trick next year, though, with Robbie being another year older!”

Speaking to the Guardian last night, he added:

“Robbie is Mark Allen’s stepson and is probably the best junior prospect in the UK.

“What he is doing at 16 is very similar to what Mark did when he was that age.

“It’s only a matter of time until he dominates amateur snooker and turns professional,

“Antrim really is the hot bed of snooker in Ireland!”