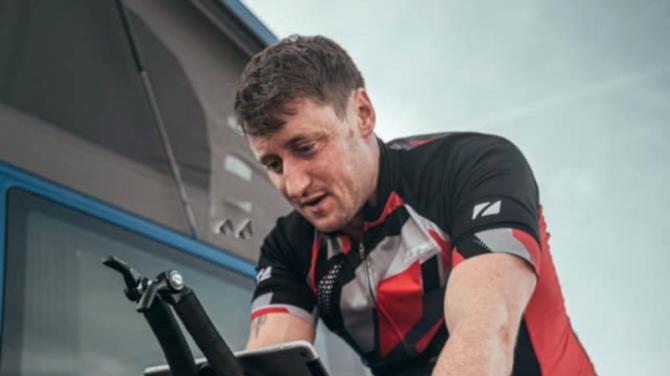 Sandhurst graduate Darren Hardy said his body has been ‘broken’ by the endeavour, but was determined to press on through the injuries and pain, to raise funds for the Help for Heroes charity.

Darren left Antrim as a teenager to join the army and still has family in the town, having returned briefly while he served at Massereene Barracks.

He was due to appear on Good Morning Britain this morning (Tuesday) to tell the UK about his motivation for undertaking the quest.

He’s already smashed a target of £3,000 and the total is currently sitting at over £5,600, and he is now setting his sights on raising £10,000, as well as highlighting the mental health problems facing both veterans and civilians.

Iraq veteran Darren has been incorporating famous landmarks into his challenge, including the Shard skyscraper, the London Eye and the Serpentine lake.

After serving 15 years in the Army, he was medically discharged with post traumatic stress disorder and a replaced shoulder.

He struggled with suicidal thoughts in 2018 but was spurred on by the thought of his daughters living without a father, and was assisted through his problems by Help for Heroes.

Darren had always been fit and worked as an exercise instructor in the Army, but raised his physical and mental fitness for new purpose as he battled depression.

He was selected to represent Team UK in the ex-services’ Warrior Games taking gold and setting a new record in the 100m and 200m sprint.

Already this year, he ran, cycled and paddle boarded from Inverness to Salisbury to raise funds for Help for Heroes.

His current challenge began in his home town in Hampshire, last Sunday, took in Aldershot and other military towns before arriving in central London on Sunday.

He began with a swim in the Serpentine, rode a bike fixed on The Shard’s viewing platform, then ran between central London’s military monuments.

His mission is due to end today, when he burns up his remaining energy in the tenth challenge, at the London Eye.

He will also have completed the highest Ironman triathlon, the first across different locations and scoop the World Record for an endurance event at the Eye.

His birthday also occured during the challenge, and as well as having to consume 10,000 calories a day, his friends and supporters laid on pints of Guinness and plenty of KFC.

Along the way, people have been setting out collection boxes and contributing to Darren’s Just Giving page.

Darren said that in the current climate, his fundraising was more important than ever.

“People are struggling with mental health during the pandemic and Help for Heroes and other charities have lost 40 per cent of their income.

“This is the awareness I want to raise.

“We have to step up as a country and help our veterans and other people who are struggling.”

Darren said his wife Gemma and daughters Georgia (3) and Jessica (2) have been behind him all the way, despite the hours it takes him away from them.

“They are my biggest supporters and when it’s when I’m in that deep dark place that I think about that.”