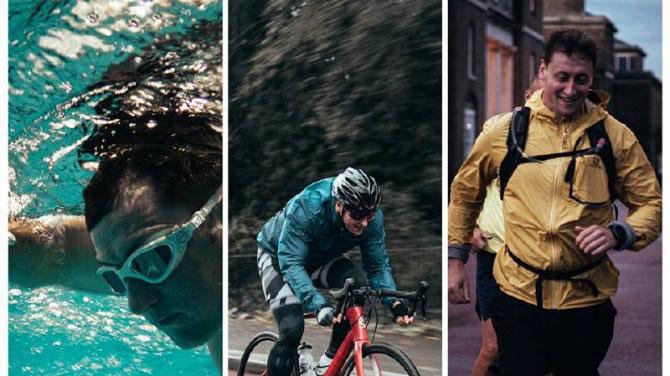 A MILITARY man who grew up in Antrim is celebrating after raising over £12,400 for armed forces and mental health charities through completing ten triathlons in ten days.

Originally from Parkhall, Darren Hardy said that the challenge in aid of Help for Heroes was ‘the hardest 10 days of my life’.

He certainly finished ‘on a high’, last week as the operators of the London Eye stopped the big wheel as he reached the final few miles of his journey, with his pod containing a treadmill at the very top of the 135m structure, with his support team applauding him over the line.

But it was a hard won victory.

Over the ten days, Darren’s broken body was on the point of collapse and days after finishing, he is still suffering the after effects.

“It’s silly things really, my head is all swollen because I have a bad ear infection from swimming in cold, dirty water.

“My Achilles tendon is wrecked, it feels like my ankle is being held on by my sock.

“As well as the physical toll, there were lots of logistical issues, sponsors and supporters and suppliers of equipment pulled out because of COVID-19, a body was pulled out of one of the lakes I was supposed to be swimming in.

“The ever-changing goalposts and the fact that it was getting harder and harder to get food and nutrition into my body to keep me going were almost bigger hurdles than the challenge itself.”

But Darren said he had to push on, to inspire others.

“I want to show people that if they think they can’t do something, they can.

“And it’s not just about doing 1400 miles in ten days, it’s about getting up and going outside and having a walk around the block, for some people that will be as big a challenge as anything that I have done.”

Exposure in the likes of the Daily Express and on Good Morning Britain meant that Darren’s initial target of £3000 has soared over £12,500.

“It’s crazy and every single message of support spurred me on,” said Darren.

“Suicide deaths continue to outstrip coronavirus deaths, we are in a mental health crisis and that’s why this money is so important - it will help buy kit for a disabled ex-serviceman or a counselling session for someone in deep distress.”

Darren said support from his wife, two daughters and remaining family in Antrim - grandad, great grandparents and uncle, a clergyman at Greystone Road Methodist Church, had kept him going.

And he’s not prepared to rest on his laurels - his next challenge, postponed to December because of the current lockdown in England, will be ‘the world’s highest duathlon - a 10km run, 150km bike ride and, 30km run on treadmill and static bike - an an altitude centre at the equivalent of 12,000km, three times the height of Ben Nevis.

Darren said that it will be comparable to doing the challenge with just one lung.

“And that’s just this year!” he laughed.

Sandhurst graduate Darren left Antrim as a teenager to join the army and still has family in the town, having returned briefly while he served at Massereene Barracks.

He began his daily routine with a 2.4-mile swim, followed by a 112-mile bike ride, then finish with a marathon run of 26.2 miles.

Iraq veteran Darren incorporated famous landmarks into his challenge, including the Shard skyscraper, the London Eye and the Serpentine lake.

After serving 15 years in the Army, he was medically discharged with post traumatic stress disorder and a replaced shoulder.

He struggled with suicidal thoughts in 2018 but was spurred on by the thought of his daughters living without a father, and was assisted through his problems by Help for Heroes.

Darren had always been fit and worked as an exercise instructor in the Army, but raised his physical and mental fitness for new purpose as he battled depression.

He was selected to represent Team UK in the ex-services’ Warrior Games taking gold and setting a new record in the 100m and 200m sprint.

Already this year, he ran, cycled and paddle boarded from Inverness to Salisbury to raise funds for Help for Heroes.

His latest challenge began in his home town in Hampshire, last Sunday, took in Aldershot and other military towns before arriving in central London last Sunday.

He began with a swim in the Serpentine, rode a bike fixed on The Shard’s viewing platform, then ran between central London’s military monuments before finishing at the London Eye.

He will also have completed the highest Ironman triathlon, the first across different locations and scoop the World Record for an endurance event at the Eye.

His birthday also occurred during the challenge, and as well as having to consume 10,000 calories a day, his friends and supporters laid on pints of Guinness and plenty of KFC.

He also enjoyed a pint of the ‘Black Stuff’ at the finish line.

Along the way, people have been setting out collection boxes and contributing to Darren’s Just Giving page.

Darren said that in the current climate, his fundraising was more important than ever.

“People are struggling with mental health during the pandemic and Help for Heroes and other charities have lost 40 per cent of their income.

“This is the awareness I want to raise.

“We have to step up as a country and help our veterans and other people who are struggling.”