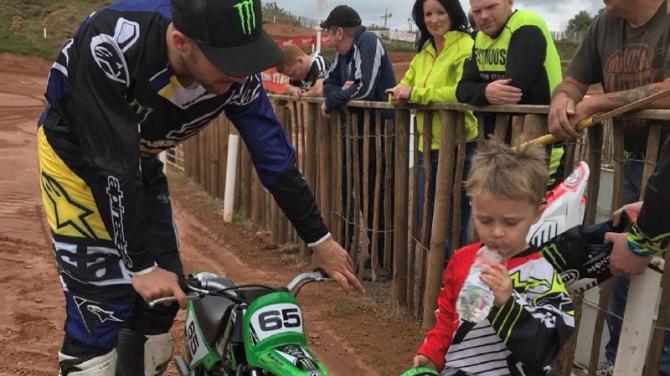 JUST weeks after celebrating his sixth successive World Superbike title, local sportsman Jonathan Rea is appealing for the return of his childrens’ bikes after his Templepatrick home was targeted by thieves.

Mr Rea took to social media on Monday to say: “Last night thieves broke into my garden shed and stole my training bikes and kids bike along with garden equipment!

“Please help me to get these bikes back!”

The distinctive Kawasakis are easily identifiable and included in the haul are his oldest son Jake’s first mini dirt bike, which he said had real sentimental value.

Thanking his fans, Mr Rea said his family was ‘overwhelmed by all the support we've received in connection with the bikes and equipment that was stolen from our property’.

“Thank you so much for all the kind words,” he added, in a statement.

“The matter is now in the hands of the PSNI.”

He said the child’s bike had been fully customised so was ‘easily recognisable’.

Local man Rea, wife Tatia and their sons Jake and Tyler returned to set up home in Northern Ireland in 2018 after a transient 10 years on the 13-country World Superbike circuit.

Speaking in an interview two years ago, he said that he chose to return so that his children could enjoy a similar quality of life that he had grown up with, and to avail of family support.

“We could have set up in any of the countries where I race.

“We chose the Isle of Man initially, simply because a team-mate lived there.

“But as my career began to quite literally accelerate and we were travelling more and being invited to all sorts of events, my mum was having to fly over to babysit.

“It was too much to ask, and not the way I envisaged raising a young family.

“The realisation was a catalyst for me and towards the end of last year I started thinking about coming home.

“I had always been looking at houses, and house prices, here because I'm nosy.

“I had an idea of where and what we wanted and when we found one we liked, we made a serious bid on it and ended up getting it.

The plush home includes a dirt bike track for the kids and starred in a humorous video on social media earlier this year, where a bored and locked-down Rea could be seen riding a scrambler indoors before being showered in a fizzy drink by his sons.

UUP councillor Jim Montgomery condemnded the incident, adding: “Sadly this is another crime in our borough that has to be condemned, and seems to represent an increase in activity by opportunists at this time.

“I encourage anyone with information that can help catch these criminals to report it to the police so that they can stamp down on crime in the borough.”