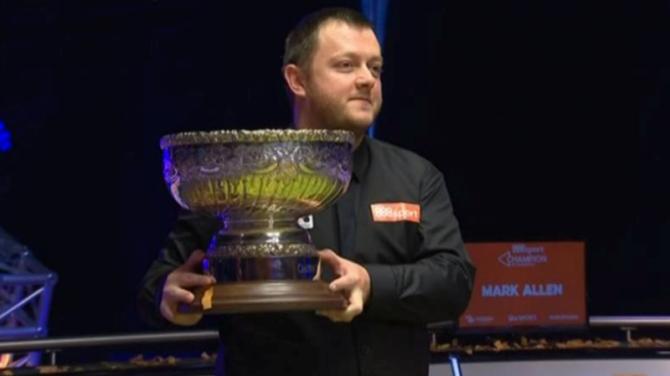 ANTRIM’S Mark Allen has been crowned Champion of Champions - and he did in style by emphatically blowing snooker’s finest out of the water!

This was a true masterclass from ‘The Pistol’, proving once again that he is not afraid to go big name hunting at the very top level.

The final against defending champ Robertson got off to a balanced start with the scores at 4-4 each - including no fewer than five centuries.

Mark won the final frame of the session to edge into the lead, and he did not look back from there.

He went on to take the title 10-6 - a fair result for the better player on the day.

It was the local man’s second ‘victory’ of the weekend.

He had been embroiled in heated exchanges with Ronnie O’Sullivan in the semi-finals, after the six-times world champ complained that Allen was distracting him by being in his eyeline on a number of occasions.

In response, the Antrim man branded him a ‘bully’. O’Sullivan later texted him to apologise for the incident.

A happy ending - but perhaps not as sweet as defeating O’Sullivan 6-3 in the first place!

“Mark was absolutely outstanding and as always did Antrim proud,” he said.

“I watched the final and I don’t think I have seen Mark as composed and determined during a competition.

“Mark played outstanding snooker throughout the Tournament and beat the World number 1, 2 and 3 on his way to victory.

“For me Mark’s break in the 15th frame after being 37-0 down was top notch and put him 9-6 ahead leaving one more frame to finish the match.

“Mark is a great ambassador for Antrim Town and does so much for local causes. It is fantastic to see Mark winning tournaments and I wish him every success in the future.”

MLA Trevor Clarke agreed that the victory was richly deserved.

“He’s not only Antrim’s champion, he’s now the Champion of Champions 2020,” said the DUP man.

“I know many local people will have been cheering him on during the tournament and Sunday’s final.”

“On behalf of the citizens of our Borough, I want to congratulate Mark on becoming the 2020 Champion of Champions. This is an outstanding achievement and we are extremely proud that Mark has once again put our country and our Borough on the world stage.”

“It is unfortunate that Mark had to enjoy one of his most memorable weeks of his career behind closed doors but I have no doubt that his huge fan base was watching and cheering him on all the way.

“He is a true ambassador for our Borough and a fantastic role model for our young people. I wish him every success for his next stage of his sporting career.”