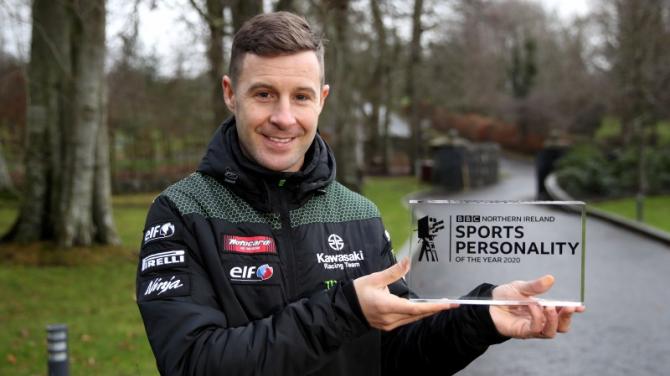 HOME fans have finally given all-conquering Templepatrick race ace Jonathan Rea something to celebrate this Christmas!

After securing his sixth World Superbike title this season, the local man seemed destined to join the UK’s sporting elite on the shortlist for BBC Sports Personality of the Year crown.

But it was not to be. He may have rewritten the history books, but that did not impress the independent panel of judges.

And that decision has not gone down well on this side of the Irish Sea. South Antrim MP Paul Girvan believes that the BBC’s decision not to add the local hero to the shortlist will leave legions of fans considering ‘the value of the Licence Fee’.

After winning the third of his six consecutive titles Rea did make the cut - and he ran Sir Mo Farah right down to the wire to take the runner-up spot.

That achievement underlined the fact that he had a loyal following at a national level, which left many baffled. If three titles was enough to make the cut, surely six would be a no-brainer?

Among them is Mr Girvan who raised the issue during Northern Ireland Questions at Westminster. Furthermore, he had co-sponsored an Early Day Motion at Parliament urging a rethink.

The DUP man also appealed directly to Tim Davie, the Director General of the BBC urging him to bring pressure to bear - especially in light of boxing champ Tyson Fury’s calls for his name to be withdrawn from the final six.

That spirited campaign seems doomed to failure - but it’s not all bad news for Jonathan Rea!

Indeed, this week he has been named the BBC Northern Ireland Sports Personality of the Year after a record-breaking 2020.

It is the third time he has won the BBC Northern Ireland award, an achievement only matched by Rory McIlroy.

Rea edged out middle distance runner Ciara Mageean. The Portaferry athlete has her most successful season to date, breaking a number of records and becoming the first Irish female to break the two minute barrier for 800 metres.

The judging panel also felt it was appropriate to recognise the achievements of three other sportsmen and women: Northern Ireland international footballers Stuart Dallas and Rachel Furness as well as Cavan Gaelic Footballer Thomas Galligan, who were all included in a ‘highly commended’ category.

But the man of the moment was undoubtedly Jonathan Rea - and it was clear that the Freeman of the Borough did not see it as a consolation prize.

“In what's been a tough year for sport it’s a blessing that we managed to get our championship completed and to bring another World Championship back to Northern Ireland makes me very proud.

“I’ve missed all the travelling support this season and I'm excited to get the fans back trackside as soon as possible.

“I’d like to take this opportunity to thank everyone in Northern Ireland for their continued support and to thank BBC Sport NI for this award.

“I would also like to wish everyone a Merry Christmas and a healthy New Year.”

“While it has been a strange and difficult year for all of us, our sportsmen and women have continued to excel on the world stage,” she said.

“There have been so many inspirational performances over the last 12 months, however the judging panel felt that Jonathan Rea once again deserved the 2020 award after another remarkable season.

“He is a fantastic ambassador for Northern Ireland who continues to rewrite the history books.

“The panel also felt that Ciara Mageean deserved special praise after breaking a number of records in what should have been an Olympic Year.

“Ciara was in fantastic form, and becoming the first Irish women to run under two minutes for the 800 metres is a stand-out achievement.

“It is also important to recognise the achievements of Rachel, Stuart and Thomas in a year like no other.“"”

“To win six World Superbike Championships in a row is a remarkable sporting achievement and that combined with the impact that Jonathan Rea has made on motorsport this year makes him a well-deserved winner of this award,” he said.

“He is a fantastic ambassador for Northern Ireland and, in what has been such a challenging year for everyone, he has inspired and lifted people across the country with his unprecedented success.”