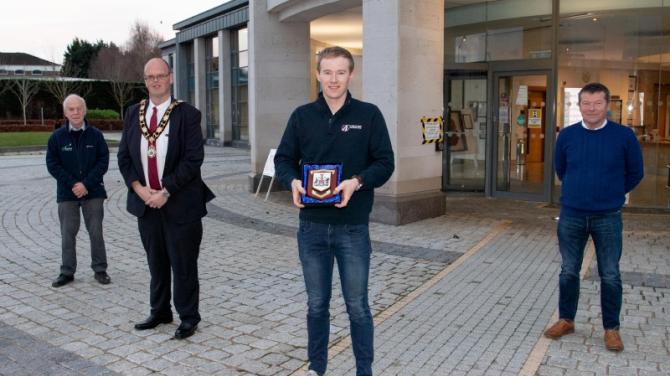 2020 has been a deeply challenging year for sport, but despite the seemingly endless raft of restrictions to slow the march of COVID-19 there have still been some notable local success stories.

Former Masters champ Mark Allen, for example, added another top flight title to his haul when he was crowned Champion of Champions.

Jonathan Rea excelled too, making it six World Superbike titles out of six - proving that he has the drive to win, spectators or no spectators.

And then there was Wayne Boyd, who ended the year very much in the driving seat after an incredible season on the track.

And that stellar success has been celebrated with a special reception for the Templepatrick man at Antrim Civic Centre organised by Mayor Jim Montgomery.

Together with fellow fan Councillor Roderick Swann and Wayne’s proud dad Raymond, they chatted about his career to date - and his hopes for the future.

“I was delighted to be able to meet and congratulate Wayne for winning this year’s European Le Mans Series,” said the Mayor.

“Listening to Wayne discussing the event and what was involved shows the dedication and hard work he has shown in winning this prestigious endurance series.

“He has had a fascinating career to date and I hope the success continues for him in the future starting in Daytona in January.

“I wish him continued success for many years to come.”

The local man became a European motorsports champion just over a decade after he won the British Formula Ford Championship as an 18-year-old.

United Autosports were also crowned European Le Mans Series LMP3 Champions for the third time at the final round of the 2020 season in Portimao, Portugal.

The three drivers drove a stunning race to win in style for the third time this year after starting from pole position for the fourth time. The team finished 21 points ahead of second place, scoring a total of 94 points after three wins, a third place and four poles.

This championship tops off United Autosports’ fantastic year, after winning the Le Mans 24 Hours in September as well as the FIA World Endurance Championship.

They won the ELMS LMP2 title too, followed by the ELMS LMP3 title – a feat no other sports car team has achieved in the same year.

United Autosports is one of the fastest growing motorsport teams in Europe and competes globally in numerous sports-prototype categories worldwide.

Based near Wakefield, West Yorkshire, the team is co-owned by McLaren CEO Zak Brown and former racing driver Richard Dean.

The team was formed in 2010 and initially contested a prestigious GT championship in Europe.

After being a front-running British GT Championship team for four years, they have since branched out into racing sports prototypes globally.

In 2020 they won the FIA World Endurance Championship a round early in their debut year.

Boyd and his co-drivers led the LMP3 division in their Ligier-Nissan prototype after back-to-back wins earlier in the series but closest rivals Real Team Racing were just 10 points behind.

Boyd increased the gap to 11 points with pole position, the fourth time in five rounds he had been fastest in qualifying, and Wheldon seized the opportunity to build a lead during a marathon opening stint of the four-hour race.

He stayed in the car for the first two hours, stretching away from the field by more than a minute before handing over to teenager Gamble.

However, the changeover was followed by a safety car period which allowed the pack to close up and wipe out their lead.

Unfazed, Gamble charged away to build up a gap of 35 seconds before turning the car over to Boyd for the final 50 minutes.

He re-joined in second place behind David Droux in the Ligier of arch rivals Real Racing. He could have settled for second which would have been good enough to secure the championship.

But he wanted to finish the season on a high and, as his team-mates fretted in the pits, urging him not to take any chances, he closed in on Droux, pressurising him for a number of laps until the Swiss driver made an error.

As he ran wide off the edge of the track, Boyd pounced, sweeping past into the lead and speeding away to win by seven seconds. Amazing stuff!