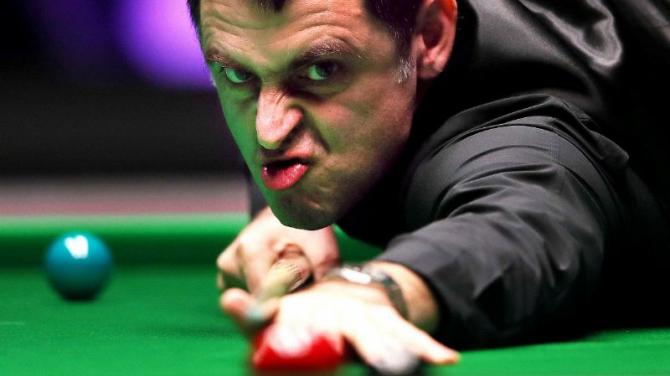 MARK Allen will be aiming to bring the Masters title back to Antrim for the second time in three years - but old rival Ronnie O’Sullivan reckons that The Pistol would be wise to lower his sights.

It is clear that the local man will have to hit the ground running, as he begins his campaign against four-time World Champion John Higgins on Wednesday.

But the local man has a habit of confounding expectations.

The World number 10 Allen pocketed the Champion of Champions title earlier this season, proving that he remains a force to be reckoned with.

But O’Sullivan still believes that the Antrim ace would still struggle against the leading pack of Judd Trump, Neil Robertson and three-time Crucible king Mark Selby - though Trump has been ruled out this year because of a positive COVID test.

“Mark Allen's a very good break-builder and very good scorer but if you look at Neil and Judd, they have a power game,” said Ronnie.

“They play power shots which no one else can play, and that gives them an advantage.

“When I say power game, I don’t mean hitting the ball hard - I mean to be able to get the white around effortlessly like Judd and Neil do.

“When the ball travels 18 feet round the table, they’ve just done it because it's easy to them whereas with Mark Allen, maybe he struggles with that and that's the only thing that I think if you could put in his game, he would win like Judd is winning.

“It’s the equivalent of these new modern-day golfers. They hit the ball so far that they’re turning the golf course into a bit of a pitch and putt.

“Whereas Tiger Woods, he realises that and thinks these guys are shrinking the golf course. Although he’s capable and has got the skill to do it, it’s hard as you’re on your limit quite a lot.

“Someone like Mark Allen, if he had the power game and was able to manoeuvre the white around like them (Trump and Robertson), he would be up there with them because he's a break-builder, he’s got the bottle and he’s got a great mentality for the game.

“He’s a real dogged player that can play - but the one thing he could put into his game is that power game.”

This year's Masters was due to be held at Alexandra Palace but a surge in coronavirus cases means that the event will now be held behind closed doors at the bio-secure Marshall Arena in Milton Keynes.

Allen will bid to become just the 10th dual Masters winner and seven-time champion O’Sullivan, who has lost four times in 10 matches against the Antrim man, says the ball is firmly in the five-time ranking event winner's court.

“Do you say to Mark Allen, 'Look, let's try and get that into your game' or do you say, 'Look, why bother? You're going to win tournaments and you're going to have a good career, are you happy with that?'

“He might go, 'Yeah' or he might go, 'No, I want a power game and I want to be able to manoeuvre that white'.

“Then he might have to change something technically to enable him to do that.

But the lion’s share of wins, in his opinion, will remain with the big three.

“Trump, Robertson and Selby are playing to such a high standard, it will be one of those three that win the majority of the events.

“If there are 25 tournaments, I reckon 20 of them will go to them. Judd will win six, Neil will win five and Selby will win four. I just think it is that sort of level.

“Mark Allen might win one, Ding (Junhui) might win one, I might win one, someone will win the Shoot Out. I just think they are playing to such a high level and the players from 17 downwards in the rankings are all a bit hit and miss in comparison.

“There’s a massive gap between those three and maybe the number 18 in the world. I’ve played those three now and you don’t get a lot off of them, but you seem to get away with quite a bit against the lower-ranked players.

“Allen slipped in and won one, Kyren Wilson won one. There will always be that chance for a player to maybe catch one of them on their off day in a final or a semi-final, but it is difficult.”

Mark’s legion of fans may disagree, of course!

But O’Sullivan’s ‘constructive criticism’ does open up one mouth-watering prospect.

If Mark advances to the second round he will face either Ding Junhui or a certain Ronnie O’Sullivan on Friday!