Diane is outstanding in her own field(s)! 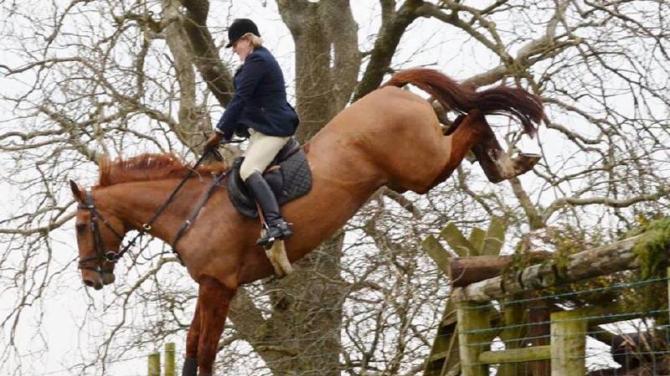 DIANE Gibson grew up in Knockahollet, between Dunloy and Loughguile - described as ‘her father’s shadow’.

Love brought her to Templepatrick, where she has resided for the last 30 years, but her farming roots stood her in good stead for her future life.

“Farming has changed to the extent where in modern times, the wife has gone out to get a job and keep the farm,” she said.

But like most things, Diane does things in her own way - staying at home to manage the farm while her husband, well known barrister Barry, goes out to work.

She was educated at Knockahollet Primary and Dalriada, with school being remarked upon as ‘a necessary evil!’.

“It was a mixed farm, with beef and dairy cattle and we grew cereals,” she said.

“At the weekends the workers went home and during the holidays, the work still needed to be done, so there was no break, bailing, cutting, calving and milking, everything my father did, I did along with him.

Two younger siblings later came along and it was a neighbour who sparked Diane’s love of all things equestrian.

“There was Brian Henry and John Matthews, John had a mare called Molly Mayo, she was a speed mare who was later sold on,” she said.

“I used to go to visit and he took me one day and let me ride here and that was it, I never looked back!”

At school, Diane was a good all-rounder, excelling in sports like hockey and tennis.

She also enjoyed a hectic social life with the Young Farmers at Kilraughts and enjoyed talking with the well-known late historian and character Alex Blair.

She did a diploma in Business Studies at Coleraine Tech, before going on to study accountancy at the University of Ulster in Jordanstown.

She met Barry at a barn dance in Clough and the pair went their separate ways for a while, as both entered further education, before meeting again and marrying.

Based in Templepatrick, with a strong farming and equestrian community, Diane threw herself into the family business with gusto, her practical experience and accountancy know-how standing her in good stead.

Hers was the first farm in the area to introduce a Keenan feeder wagon, a ‘diet mixer’ machine which blended silage, treacle and molasses to make nutritious food for young cattle.

She was a regular at Ballyclare mart and can remember well the advent of the BSE crisis, which caused the bottom to fall out of the cattle industry for a long period.

Changes in the industry have prompted diversification, with the family now running a solar farm nearby and son David runs a contracting firm after working for a period in New Zealand.

“You have to be adaptable in this business,” she said.

“Things can change very quickly, if there is a disease outbreak or some other crisis, you can be in trouble very quickly.

“The Department (of Agriculture, the Environment and Rural Affairs) has been advising people for years to have a back-up - a B&B, an equestrian facility, kennels.

“It’s the smart thing to do, there is an old saying my mother had, that ‘you can’t always do what your father did’.

“You have to adapt to survive, you have to be pro-active.

“It used to be that the wife went out to teach and the man would run the farm, but it would be the woman making the money to keep the farm.

“I’m lucky in that Barry is the one going out to work and ‘earning a crust’!

“But farmers always need to pay attention to their books, especially now that the Special Farm Payments will be coming to an end.

“Farming has to be a business, not a hobby, if we want it to have a future.

“Farming is not just the farm, it supports a lot of other jobs and industries - feed suppliers, manufacturers, even IT jobs, as there is so much technology involved now.

“If farming were to fail, a lot of other industries would suffer massively.”

Like many industries, Diane has seen big changes in farming.

“Factory farming and intensive farming is on the rise, whether we like it or not.

“If this country is big enough to sustain that sort of farming remains to be seen.

“The speed of life in general has intensified, thanks to the internet being in our homes, we’ve all had to move with the times and keep up to date.

“There is no room for dilly-dallying anymore.

“Most of the changes I see have been for the better - standards are much higher, welfare is much better, I see more conservation and protection of the countryside.

“In terms of horses, since the financial crisis, your average person can’t really afford a horse for this and a horse for that - they want something that can do a bit of everything, show-jumping, dressage and eventing.

“So again, the breeders and producers have had to adapt to that.”

Diane’s own love is heavyweight hunters, having won several championship and reserve champion titles over the years.

She also rides with three hunts, and her show horses take part too.

Diane is heavily involved in the Royal Ulster Agricultural Society, starting off as a competitor, before going on to get involved in committee work.

She became vice president of the RUAS and head of the Horse Committee.

“I started off stewarding and then got on to committees,” she said.

“I wanted to give something back, especially to the equestrian scene.

“As a competitor, I was able to turn up and take part and win prizes, but there are a whole lot of people working hard behind the scenes to make that happen so that other people can benefit.”

Diane was instrumental in Balmoral Show’s historic move from its old headquarters at the King’s Hall to the new site on the outskirts of Lisburn.

In 2013, after more than 100 years at the same site, Balmoral made the move to the site of the former Maze prison at Lisburn.

Around 600 members of the RUAS gathered at an extraordinary meeting in 2012 to debate the move and an overwhelming majority voted to give the move the green light.

The move meant the show could finally expand and feature many classes and events that couldn't be included before.

A new pavilion has been constructed and there are now vast areas of exhibitor parking.

Diane refuses to call the new site anything other than ‘Balmoral Park’.

“I know it was a prison site in the past, we all know that, but it is the past, we have to move on into the future together.” she said.

The show is now going from strength to strength in the new venue and is attracting higher visitor numbers than ever.

Diane’s ingenuity and personal experiences have helped her and her team revitalise the equestrian offering at the event.

“It is the biggest agricultural show in Ireland and I am very proud of what we have achieved.

“I understand that I am a woman in a man’s world but my mother always said ‘you have to work twice as hard as a man and do twice as good a job, because you are a woman.

“But my hard work has always been rewarded.

“I was given so much by the society as a competitor and I have always been very keen to make sure that other people can get the opportunities that I did when I was starting out.”

After three decades, Templepatrick is definitely home for Diane.

“Ballymoney is where I am from but I wouldn’t go back there,” she said.

“If I had my life to live over again, would I change anything? Not much.

“Contentment is a wonderful thing.

“This area is wonderful, we are in the middle of the country but ten minutes from Belfast, right beside the M2 and the airport, there is Laurel View, Connell Hill, Portmore, The Meadows and McKenzie’s equestrian centres a short distance away.

“You have people like Joe Sloan, Wilson Dennison, Ian Wilson, Britt Megahey, all big in their various equine discipline and they are here for a reason, it’s connectivity on one hand and rural life on the other.

“This area really does have the best of both worlds.