Six out of six! 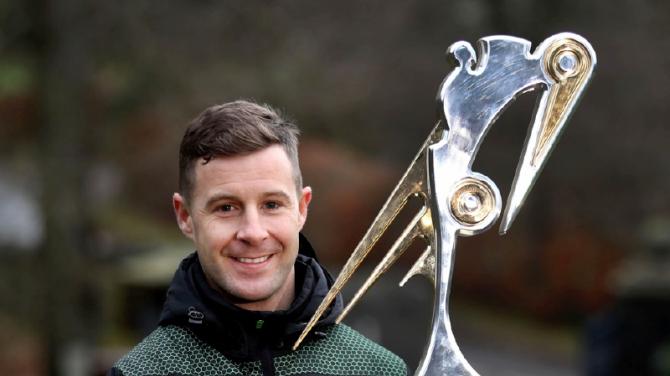 WORLD Superbike star Jonathan Rea is the Adelaide Irish Motorcyclist of the Year for a record breaking sixth time in a row.

The Templepatrick race ace has now won Irish motorcycling’s top honour eight times to equal the achievement of road racing legend Joey Dunlop, who was an eight-time winner between 1979 and 2000.

There was little doubt that the Kawasaki rider would scoop the main prize following his sixth successive World Superbike title.

The 33-year-old received the famous Joey Dunlop trophy during a virtual online awards ceremony after the annual gala evening in Belfast was unable to be staged because of the COVID-19 pandemic.

“This is an incredible feeling,” said Rea.

“I am gutted I can’t receive this trophy on the night because it’s such an amazing occasion every January when all the motorcycling industry come together under one roof.

“I receive so much support from the fans there and I will miss seeing them all.

“This is an unreal trophy which will once again take pride of place as the centrepiece in my home.

“To equal the record set by Joey Dunlop is also simply incredible. He was my hero growing up and to think I have won this award the same number of times as him is hard to believe.”

Rea clinched a record breaking sixth World title in a row during a season blighted by the pandemic.

“2020 was a year like no other and the World Superbike organisers did so well to run the championship safely,” added Rea.

“It was a tough year for me starting the season with a crash but we hit the ground running in the middle of the season and I was able to bring the world title back to Northern Ireland again.

“I assure everyone I am planning a big assault on this new season.

“Kawasaki have a new bike, and I am excited about that as the potential is more than the previous model.

“But I am under no illusions how tough it will be with new challenges whether it be a bike or a rider or both.

Six other awards were presented during the virtual awards which is available to watch on demand on the Bike Awards Facebook page and via YouTube.

There are interviews with all the winners in the special programme hosted by Stephen Watson and Keith Huewen.

Jordan Scott picked up the Off-Road award after an excellent year in the British Extreme Enduro while the Cookstown 100 Club won the Road Race award for the safe running of their event.

The County Tyrone event was the only road race in Ireland in 2020.

The Voluntary Bikers Group were the recipients of the Services to Sport award thanks to their amazing efforts to support the local community last year.

Over 200 bikers delivered food parcels, medication and Personal Protection Equipment to people in need during the pandemic.

Two of Irelands most decorated riders were inducted into the Hall of Fame. Ralph Bryans, who won the 50cc Grand Prix World title in 1965, and Stanley Woods who won a remarkable 29 Grand Prix’s in the 1920’s and 1930’s. He was also a 10-time winner at the Isle of Man TT.

The Irish motorbike awards are sponsored by Adelaide Motorbike Insurance, administered by Cornmarket.