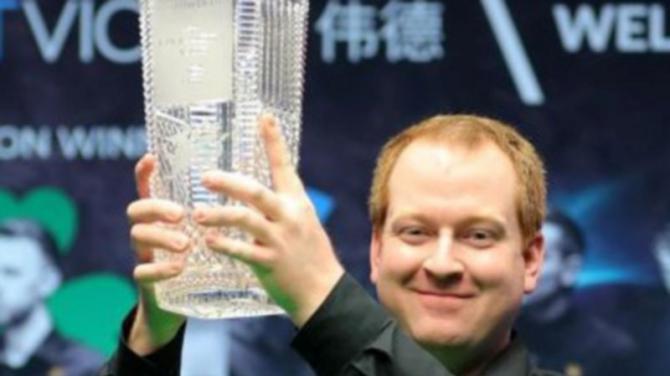 ANTRIM has another snooker champion this week after Jordan Brown ripped up the form book to mastermind one of the greatest upsets the sport has ever seen.

Just five years ago he was working part-time at Islandbawn Stores and was considering giving up the game altogether, but on Sunday he was crowned Welsh Open champ.

And he did it in style, brushing aside Mark Selby and Stephen Maguire to book his place in the final against Ronnie O’Sullivan.

The odds were not in his favour. The world number 81 started the tournament as a 750-1 outsider, but somehow he held his nerve to clinch an incredible 9-8 win to become the lowest ranked winner of a ranking title in more than a quarter of a century.

But this is a talent who has been rising in confidence. Just last month he reached a career first quarter final in the German Masters.

His bank balance has dramatically improved too, pocketing a cool £70,000 for his nerve-shredding turn at Celtic Manor!

Now, it seems that the former Parkhall student may be poised to step from the shadow of former Masters champ Mark Allen, his regular practice partner and mentor.

The man himself is still struggling to come to terms with the fact that he has been catapulted into the sport’s premier league.

“It feels unbelievable and it’s not going to sink in for a while,” he said.

“I have always believed in myself but I just never thought this would happen.

“I knew my game was good enough because whenever you’re in and scoring and taking your chances it doesn’t matter who is in the other chair. If I’d played Ronnie instead of the table I think I’d have got beaten today – he’s so good he can bully and steamroller you, so I just had to stick to my guns and do what I had to do.”

Ronnie O’Sullivan said he was impressed by the emergence of a second major talent from Antrim.

“You’re not a bad player if you beat Selby and Maguire, so I knew he would be comfortable on the big stage and I’m not surprised,” he said.

Eurosport, who broadcast the event, also lavished praise on the ‘Antrim Ferrari’.

“If that doesn't lift your soul, nothing will. What a fantastic victory, and so thoroughly deserved.

“Jordan Brown survived every scintilla of what Mark Selby could throw at him on Friday, and obliterated Stephen Maguire to reach the final.

“Today, he beat the greatest player that has ever played this game to win his first ranking event title.

“What a performance. What a player!

“It’s one of the biggest upsets we’ve ever seen in a major final, and who knows what Jordan might achieve from here? If he keeps believing in himself and playing as he has done at Celtic Manor this week, Brown is going places.”

“I kept an eye on the tournament from the early rounds and watched Jordan’s matches on the TV from the quarter final stages,” he said.

“Jordan was so in control of his game he looked like a seasoned pro rather than someone in his first ranking final.

“It was nail biting with Jordan going 4-1 ahead in the early stages. You don’t achieve what Ronnie O’Sullivan has by throwing in the towel and he showed his class and experience by turning it round to a 6-5 advantage which did have me a tad nervous, frames were exchanged and at 7-7 it was all to play for.

“Jordan won the next and the finish was in sight but yet again the Rocket came back with some brave shots and the match was anyone’s at 8-8 with only one frame left.

“Jordan took his chance and with a super break to win the match 9-8.

“I was impressed at the post match interviews when Ronnie O’Sullivan spoke about what Jordan had achieved during the tournament.

“Jordan spoke exceptionally well and told us how he reached a point a few years ago when he decided to give snooker a real go. He knew he had the ability and was ready to work hard to get the results.

“He never gave up on himself which has resulted in his current success.

“This is a massive achievement for Jordan Brown and the class he showed this week will surely reap further rewards. All of Antrim was buzzing and social media was going crazy.

“Not only has Jordan done himself and his family proud he has done the town of Antrim proud and has shown that Antrim Sports Club really is the home of Champions!”