Jordan did us proud! 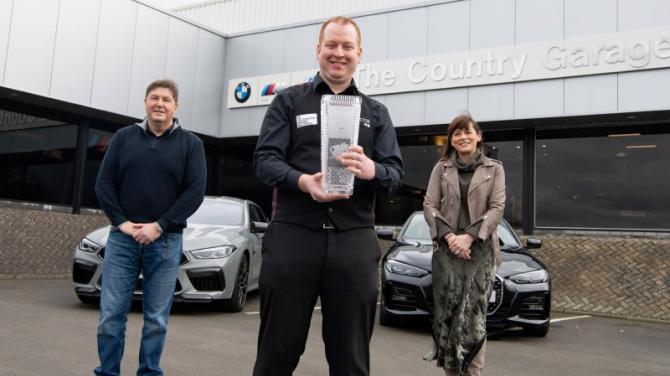 THE Country Garage in Ballymena were delighted to welcome Welsh Open Snooker champion Jordan Brown with the trophy to their Ballycowan Road showroom after his recent win.

The Antrim man, the World number 81, became the lowest-ranked player in 28 years to win a ranking title with a shock 9-8 victory over Ronnie O’Sullivan.

Jordan kept his nerve in the deciding frame, after O'Sullivan had levelled at 8-8 with a 116 break and regained his composure to claim the Ray Reardon trophy and £70,000 first prize.

James Walker, Head of Business at The Country Garage Ballymena who sponsor Jordan, paid tribute to the local man.

“We were delighted for Jordan and he has made everyone in Northern Ireland very proud with a series of stunning performances at the Welsh Open culminating in a nail biting win in the final against the World champion.

“It is very important to us here at The Country Garage, as we wish to support individuals and businesses who have supported us over the years. Throughout Northern Ireland we'll all be watching with interest to hopefully see Jordan use this as a springboard for further success and a rise up the world rankings.

“We are delighted to welcome Jordan and the trophy to our Ballycowan Road showroom and look forward to further visits after more success in the future.”