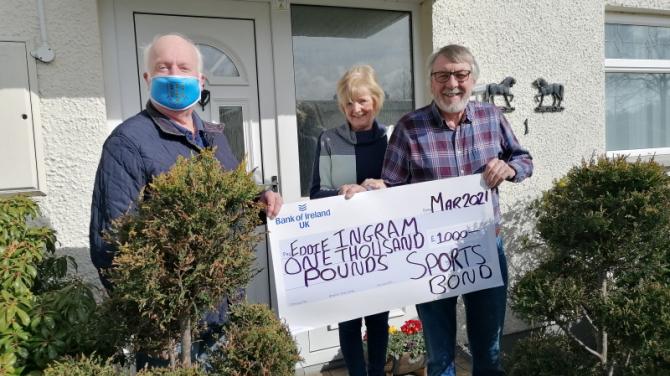 FOR the first time Sports Bond has had a £1,000 Jackpot winner in Randalstown!

Up to the present Eddie Ingram had only won a £50 major prize on Sports Bond.

However this week the jackpot numbers of 1, 8, 21, and 24 which belonged to Eddie saw the Randalstown man win the big prize.

He was informed of his success by his agent Alastair Shaw.

For Alastair, who is the Sports Bond agent for Antrim and Randalstown, it was his second success with a £1,000 Jackpot win as he previously had one with one of his Antrim members.

Promoter Brian Thompson met up with Alastair to deliver the winning cheque to Eddie and his family.

“We have some great members in Randalstown and I am delighted that one of them has had this success,” said Brian, who praised Alastair Shaw was doing an excellent role as an agent.

“So congratulations to Eddie and thanks to Alastair.

In Clough Jeanette McKay (A1313) will be celebrating her £50 major win.

Jeanette has been a Sports Bond member for many years.

Clough is where our second major winner used to live however Jonathan Nevin (A1921) now resides in the Galgorm area.

This is Jonathan’s first win on Sports Bond.

Another first time winner on Sports Bond is Elizabeth Boam (A5465) who won £10.

Sky Blue fan Brian Campbell (C1725) picked up another £10 win.For the second week in a row a member with a C number prefix has won.

So another £1,000 jackpot number has been recorded and still no one has won it twice.

“Gregory was injured in a road traffic accident recently on the A26.

“Thankfully he is now on the mend though he is still experiencing some discomfort.

“Gregory has been a Sports Bond member for many years.

“We also send best wishes to Mary Surgenor a Sports Bond member for many Years.

“Mary was recently hospitalised and we hope she is out soon.

“We were also delighted to see our sponsored player Ross Redman score a goal in the fantastic win at The Oval against Glentoran.”

A first Score will be held for the friendly international between Northern Ireland and the USA. Cards are priced at £1.Cards available through Sports Bond agent and sellers.