'We're not heroes, we just love doing what we do' 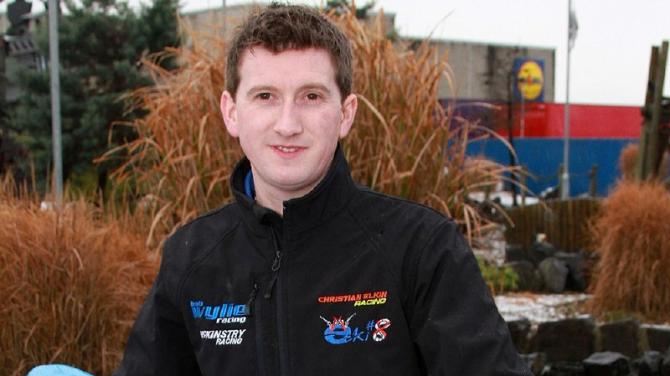 A TRIP to the North West 200 turned to love for an English motorcycle champion - and he promptly upped sticks and moved to Antrim!

Christian Elkin, a multiple British champ on the short circuits, hails from Macclesfield but regards the Ulster Grand Prix at Dundrod as the ride of his life.

He moved to Northern Ireland, the ‘spiritual home of road racing’ back in 2009, after meeting Jacqui Burns at the North West.

But from day one she was not the typical WAG! Indeed, she held the put boards, carried the kit and even drove the lorry.

Speaking to the Antrim Guardian a few years back, he spoke of the thrill of flying at speeds of up to 180mph on his Moto3, Supersport and Supertwin machines.

“After the first lap, your body adjusts - you just feel like you’re going to the shops,” he said.

Like many road racers, Christian has had his share of injuries too. His shoulder had to be reconstructed after he came off his bike. He was also accidentally ridden over by Michael Dunlop at the 2009 North West.

But like so many of his peers, his first thought was getting back on board his beloved bikes.

“I was back on the podium at the Ulster Grand Prix just months later. That was all I could think about,” he said.

“I could barely hold the champagne bottle but I wasn’t going to let the injuries stop me.

“People ride horses and go rock climbing. There is danger and a risk to almost everything.

“There is that saying ‘get back on the horse’ and it applies to bikes too.

“I don’t feel danger, I feel in control. You have to be concentrating - you can’t afford to think about what you’re going to have for your tea!

“Everybody has a choice what they want to do with their life. Nobody is forcing us to do this.

“The people who call for road racing to be banned, I don’t know what they do in life. Maybe they live and die having done nothing.

“We’re just out there doing something we love.

“Of course Jacqui worries for me, but I have her full support.”

Elkin began racing at 15, being given a special dispensation for his youth. He went on to win a podium finish in his first year or racing.

He was on his way, but there was much more to come.

He became British 125cc Champion in 2004, retaining the title the following year.

He had grown up with a love of bikes, being fascinated by a machine owned by his next door neighbour. When he was first approached to race, it’s no surprise that he was working in a bike shop!

Despite a hugely successful run on the short circuits, his attention turned to road racing.

“When I was offered my first ride at the North West it was a case of ‘if you enjoy it, great, if you don’t go and get drunk afterwards’.

“I’d never had any inkling of doing road racing at all until that.

“It was great to win a race there as a newcomer - very few have done it so I’m in good company - and being allowed to do the PR stuff afterwards was great for my profile.

“Some people wait their whole career to win a championship and I’ve won quite a few.”

One of Christian’s favourite circuits is the Ulster Grand Prix at Dundrod - which was just a short bike ride from his home between Antrim and Randalstown.

“I love the Ulster Grand Prix. I really enjoy it.

“It might be the fastest road race in the work, but it is also the safest.

“The organisers have removed walls, trees, fences and hedges and installed run-offs.

“It’s such a fantastic event and if the weather is good, it is even better. If it was beside the sea, it would be perfect!”

With decades of experience as a rider and a mechanic he knows the pressures of the game.

Down the years he has received vital support from sponsors including Bob Wylie, a former joiner.

“The amounts of money required are huge. a set ot tyres alone is worth over £300 and they last one race at the very most.

“There;s also the travelling, entry fees and all the ongoing maintenance of the bikes.

“We have generous sponsors, including Plant Lubrication and A1 Electrics, but it is hard.

“Businesses don’t have as much money as they used to so they will be less likely to spend on sponsorship.

“But a hundred pounds here and there all adds up, so we are always grateful for support.”

And then there is the physical side of racing. As in many sports, the riders need to be athletes.

“When I had my injury McKnight Studios in Antrim put a lot of work in and really helped me get back to fitness.

“Most riders also go to the gym and do cardio stuff and spin classes.

And the strength and camaraderie in the biking fraternity in Northern Ireland sets it apart, said Christian.

“When I first moved here I had heard a lot about the religion and politics, but in motorcycling I have seen none of that at all.

“We all just ride bikes and the people all come out and support us. Religion and politics are never mentioned. It’s fantastic.

“A big difference is that most of the big competitions in England are managed by one organisation, whereas here there are loads of small organisations putting on their own competitions. That took a while to get my head around.

“There are also a lot more short circuit tracks in England.”

He told the Antrim Guardian that the one thing he would like to see was more young riders coming up through the ranks.

“It is really hard because of the money side, but young riders are so important. They need to be encouraged and supported.

“Without it the sport will not progress. Thee needs to be more progression and development for younger riders.

“Prize money would be a big incentive.

“When even a set of tyres costs hundreds, knowing that there might be a little help if you get on the podium would be a big draw - especially for families who have talented kids but don’t feel they could afford for them to take part.”