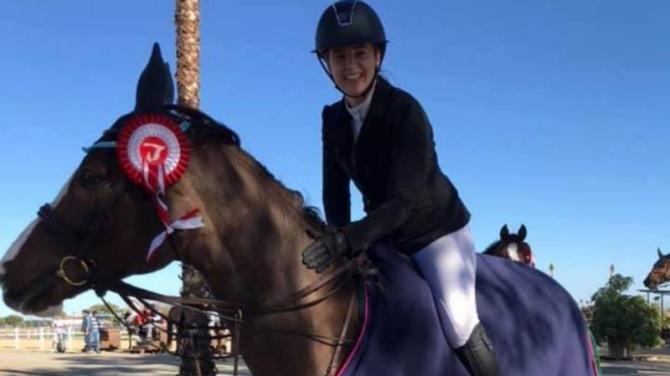 A TEMPLEPATRICK equestrian family have been forced to spend weeks in Spain after an outbreak of an extremely infectious disease at one of the sport’s major elite events.

Joanne Sloan Allen and her daughters, grooms and rider Sameh El Dahan, all normally based at Sycamore Stables on the Ballymartin Road, took the decision to isolate their horses, which have not fallen victim to the virus, rather than travel back home and risk any sort of spread.

The Sunshine Tour was brought to an early finish after a horse started showing neurological signs similar to those associated with Equine Herpes Virus (EHV-1).

The horse had been in isolation since 26 February, more than 2km away from the main competition site in Vejer de la Frontera, Spain, and despite its clinical signs, has tested negative for the virus.

The tour, which had been due to run until 28 March, ended on Sunday March 7.

On Monday March 1, the FEI, the ruling body for equestrian sports, announced that all international competition in 10 countries on the European mainland was cancelled, with immediate effect, until 28 March.

This was due to the ‘rapid evolution of a very aggressive strain of the neurological form’ of EHV-1, that originated in Valencia and had led to outbreaks in other European countries.

The jumping tours that were already under way — including those in Portugal and Italy, as well as the now cancelled Opglabbeek fixture in Belgium and Sunshine Tour in Vejer — were allowed to continue, under strict conditions, to prevent large numbers of horses being moved at the same time.

A statement from the organisers said the horse arrived at Dehesa Montenmedio, where the showground is located, from its home yard in Belgium and was ‘fit and healthy’ with no signs of illness.

The horse competed for the first two weeks of the tour, and on the first day of competition on the third week.

Four days later, a vet notified the organisers that the horse had a fever.

“The horse was immediately isolated by the organising committee of the Sunshine Tour, in stables that are more than 2km away from the actual showground,” said the statement.

It said the horse showed neurological signs for the first time on March 4 and it was decided to close the show down.

“We need to work together to minimise the spread of this virus and we greatly appreciate the cooperation and understanding demonstrated by all the riders, owners, sponsors and other team members involved.” said the organisers.

The cancellation follows the halt of the CES Valencia Spring Tour, around 800km away, in February owing to an EHV-1 outbreak.

One of the team’s three grooms was forced to go home to deal with a family situation, forcing the Sloan Allens to seek a third to help them with the horses while they stay in Spain.

Announcing their situation, Joanne told followers: “To everyone who has sent messages of good will and support many thanks from our team, we feel at the minute safe and secure and are doing all as advised to keep our horses safe.

“The Sunshine Tour (organisers) have been extremely helpful so far and the show itself with its incredible facilities and ability for us to separate our horses from others has been a blessing.

“I know everyone in Ireland and UK is really worried about this virus after seeing the situation in Valencia but please understand that anyone returning from tours are usually professionals like ourselves and have no desire to either risk their own or other horses .

“Horse Sport Ireland has a protocol in place and none of these riders will be able, even if they wished to, attend shows until a safe quarantine period has been adhered to - your biggest worry should be sales horses entering the country - so please only use registered transporters and to be safe isolate any new horses.

“We have been assured by the veterinary community that this virus can normally be stopped by good bio security and good practice - what happened in Valencia was caused by very bad practice allowing firstly a sick horse to arrive at the show and be amongst the general population and then to continue to allow entries and people to depart knowing there was a problem but as an organisation overruling the vets on site.

“With the small badly ventilated stabling area in the show and nowhere for people to separate their healthy horses from their sick, this was a perfect storm to create a mega breakout.

“Please God, with travelling restricted and everyone thinking of everyone else this will be contained.

“I am worried for my team of course but I also am thinking of the wider community in this situation we find ourselves in.

Northern Ireland’s Chief Veterinary Officer, Dr Robert Huey said: “Veterinary surgeons should also remain alert to the possibility of EHV-1 transmission to other horses that have been in-contact with those returning from Valencia.

“This is a rapidly evolving disease and situation and we must proceed with the utmost caution to protect our equine industry, which is worth an estimated £170m to £212m per year and responsible for up to 3300 jobs in the rural economy.

“If biosecurity measures are implemented as directed, the risk of onward transmission is small and horse owners are advised to take sensible precautions.

“This episode serves as a reminder of the importance of biosecurity, vaccination and having plans in place for protecting horses travelling to, and returning home from, events.”

It should be noted that it is not a notifiable disease by law.

It is currently unknown what causes some infected horses to develop the serious neurological forms associated with EHV-1 that may be fatal.