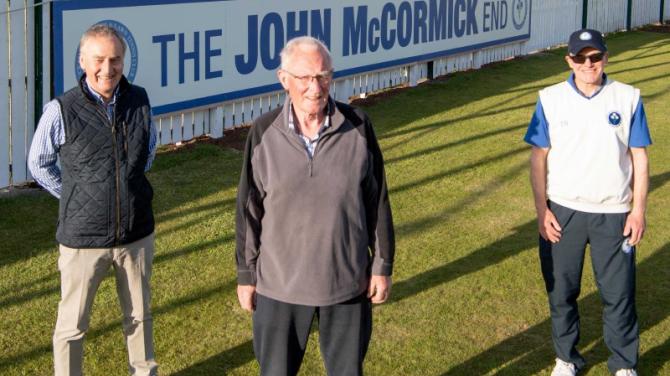 FOUNDED in 1874, Muckamore Cricket and Tennis Club is fast approaching its 150th year.

During that time they have had some outstanding players and prominent officials who have given dedicated service to the Club - most of whom were recognised and their achievements recorded in the Centenary Book published in 1974.

Of course the life and progress of the Club has carried on and when the Committee looked in depth at the contribution of members since then the name of John McCormick stood out ‘head and shoulders’ above anyone else.

So much so that it was unanimously agreed to rename one end of the ground after him.

Born and raised in Muckamore village, John is steeped in Muckamore cricket tradition and was very much influenced by his late father Paddy who was devoted to the Club for almost 50 years.

John was an outstanding player, the Club’s leading scorer with over 15,000 runs over an unbelievable 60 years until a hip replacement forced him to retire.

An excellent wicketkeeper he also represented Ulster on many occasions.

Muckamore’s most successful period was between 1962 and 1972 when they won the Senior Cup and played in another three finals.

John was central to this success and he was Captain of the 1970 team that shared the Premier League title with Waringstown.

John has served the Club as President, Chairman, Committee Member, Grounds Convenor and Club Captain over many years.

He has been the driving force behind most of the Club’s fund raising events for the past 50 odd years.

His Supporters’ Club Draw has raised considerable funds for ground maintenance and improvements.

He has sold many sponsors’ boards and has organised everything from dances, barbecues to strawberry and cream nights.

It is a conservative estimate to say that from all these activities he has raised thousands of pounds for the Club.

From playing to working on the ground and fundraising these are only part of John’s contribution.

He has spent endless hours coaching, discussing and motivating practically every player that has walked into Moylena in the past 50 years.

John isn’t only a coach to those who could play. He did and still to this day coaches anyone who is willing to listen to an ‘old man’.

Club President Ivor McMeekin stated that he spoke for all the players who played with and under John that ‘he inspired us all’.

“Amongst his peers are many great clubmen in their own right but we all recognise him as ‘Mr Muckamore’ for he has a passion for this Club which may never be matched and will never be understood by most of today’s transient players.

“John is the definition of a true Clubman and richly deserves the honour the Club are bestowing on him.”

Then the modest, surprised and slightly embarrassed John unmasked the new sign to officially reveal the John McCormick End of the ground.

Unfortunately the current COVID regulations have hampered the scale and nature of the renaming ceremony but the Club hopes to have a John McCormick Day when restrictions are lifted.

Then along with family, players, members past and present they can truly celebrate the achievements of a remarkable servant to Muckamore Cricket and Tennis Club.