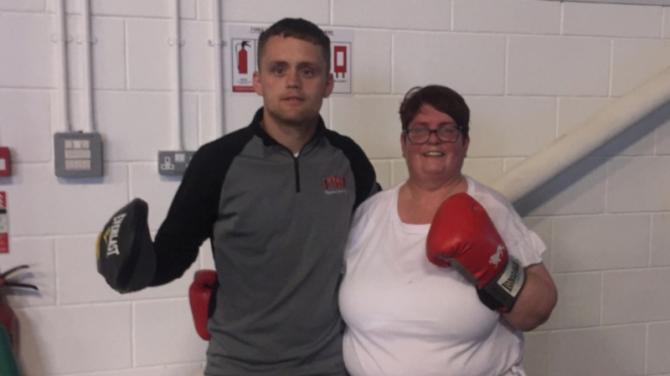 AN Antrim boxer who turned to religion to help battle his addiction issues is now giving something back to the local community.

Back in 2019, Jordan Woods told the Antrim Guardian how he had turned his back on drink and drugs to try and better his life.

Now he has turned his hobby into a career and is teaching fitness classes.

Jordan had a long struggle with substances, which his family feared would see him either in prison - or a coffin.

However a wake-up call came, which saw him arrive at the door of the Temple Christian Fellowship in Templepatrick and begin his transformation.

“I grew up without a father figure in my life, and at a young age I started experimenting with drink and drugs.” said Jordan.

“At first it started off as a joke, but the longer time went on, drugs and alcohol took a big hold on my life.

“I was no longer the boy experimenting, I was now the drug addict.

“In this time I put my family through hell, going out for three or four days at a time, they never knew if I would make it home or if they would see me alive again.

“Without a Dad in my life, my Mum and Nanny did their very best for me, to fill that void I had in my life.

“With the state I was in, they knew I was knocking on death’s door, they even said to themselves ‘could we not get him to a church or something’ as they knew it would only be a matter of time that I would be in jail, or even worse dead.”

Back in 2015, Jordan was invited to the Templepatrick church.

“I believe God led me there,” he said.

“I now don’t drink alcohol and have been off drugs for three years and counting, something that I never thought would be possible.

“A year after I started going to church, I decided I was going to try my hand at boxing, something that I have always desired to do since a young age - but I never got the chance because of the lifestyle I was living.

“When I started, it was just to tick something off my ‘bucket list’, but as time went on, more opportunities came out of it.

“My opponents got tougher and my opportunities got bigger.”

He has since picked up a number of belts and titles.

“I never thought after starting boxing at 24 that I would become a semi-professional, never mind win a title,” he said.

“I would hope that what I have achieved could be a inspiration to the young people of my local town of Antrim.

“In boxing, I won some and I lost some, that's the same as life, sometimes we lose sometimes we win but the most important thing is that we never give up.”

Two years ago, he decided to go back into education and enrolled at Belfast Metropolitan College and attained Level 2 Gym Instruction and Level 3 Personal Training.

He is now taking classes and 1-2-1 sessions in Antrim, Newtownabbey in Belfast.

“I have watched fitness instructors before and sometimes it seemed just like they are going through the motions, but I believe fitness is much more than just going to the gym and doing the same thing over and over again with no enjoyment.” he said

“I believe fitness instructors have so much more to do than tell people how to exercise - it’s about creating an environment that people feel comfortable with and people can come to you if they are feeling low and not themselves.

“I believe my boxing experience gives me a different dynamic that some personal trainers don’t have.

“My clients range from young people to old people at all different levels - after their first boxing pad session with me they leave floating like they are on Cloud Nine and as I coac,h I love to see this.

“These are people that have never been interested in boxing and never thought it would be for them and now all they say is they wished they started sooner.”

“I know only to well what a life running about the streets can do to you with drink and drugs and everything so easily accessed, people can instead get their kids into a sport and off the streets.I was that kid once and that is why I am passionate about helping othters and seeing people succeed.

“If it wasn’t for boxing and my belief in God I don’t think I would be here today to tell my story, and to help others that are suffering with the same things as I myself once did.”

Jordan is currently coaching at Fit Moms in Glengormley, Stoneworks in Antrim and for Belfast Childt, a cross-community youth project in the city in partnership with the Education Authority.

He also has his own Facebook page, JW Personal Training.